#McCulloughStrong - PGFD Family Battle Side by Side with Fire Fighter

Early in his career, the Fire/EMS Department recognized Jesse McCullough as someone special.  In May 2013, at the CRS #47 graduation, he was chosen out of 19 other graduates to receive the “Fire Chief’s Award”.  This award, the highest given in recruit school, is bestowed on an individual who best exemplifies conduct required of the Department.  Selection criteria emphasizes leadership, professional development, integrity, performance, and personal growth.


Firefighter McCullough, assigned to Landover Hills Fire/EMS Station 830 on B shift, is an excellent employee who consistently strives to do his very best.  For example, one chilly December day in 2017, he and fellow crew members were tasked with rescuing a dog stranded in a frozen ravine.  It is preferable that animals and pets are rescued by firefighters instead of well-intentioned Good Samaritans, who in their efforts could potentially sustain injuries or worse.  Following the crew’s rescue of a golden retriever,McCullough, representing the Department, explained their act of humanitarianism to members of the media. 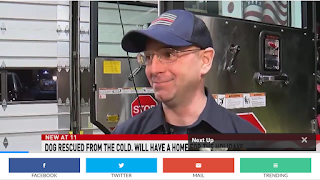 In January 2017, Jesse began a battle for his life after receiving a diagnosis of Stage IV Metastatic Colon Cancer.  However, he is not alone in this fight, as his family and extended Fire/EMS Department family are facing it head on with him.

No one is more capable of shedding light on Jesse’s plight than him, and in a recent Facebook post he stated the following: 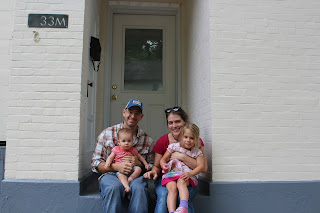 Some of this will be redundant with my Fire Department family. The rest of the folks on here don't know what is going on with me, but they are seeing benefits in my honor and have questions about it.  I have been diagnosed with stage IV colorectal cancer that has spread and grown.  The prognosis given is that I have a few months to live unless a successful treatment is found.  I do not believe that my fight is over.  Prior to this point, I have done a bunch of chemo and surgery.  Some people know but most do not realize that the career I love also brings with it a significant increased risk of cancer.  The type I have been diagnosed with is one associated with the hazards of firefighting.
I am incredibly blessed to have wonderful family and my fire department family taking care of me.  This is obviously a hard time for us, especially since the cancer spread extremely fast.  I have been fighting this battle for over a year and have been healthy and active, for the most part—needing only a few days off around my shift for treatments and a couple months off for a colon and liver resection.  My brothers and sisters in the Department covered my shifts during that time, for which I am eternally grateful.  I expect that a lot of people will have questions, as well as suggestions, regarding treatment.  Just know we are exploring more options than one might imagine.
I also expect that people likely will want to help, and there are a couple of ways to do this.  One way, which may or not be hard for some, is to write down a memory or funny story or anything you can think of and send it to me in messenger or email.  Susie had a wonderful idea that we could do this, and down the road when I am gone she will be able to share those stories about me with our girls.  This would mean a lot to us.  Sorry to drop such heavy news on everyone; but, unfortunately, it does seem as though time is running out.  I hope my words find everyone well, and I wish no else would have to go through this.  I know that's unrealistic, so take the time today and really appreciate what you have and your loved ones—even if just for a moment.

"Firefighter McCullough has always been the hardest working man in the room.  I was proud to be an employee reference for him as a firefighter in the Prince Georges County Fire and EMS Department.  Jesse is the type of employee you want to have twenty just like him.  He maintains a positive attitude, is a team player, and has an incredible amount of pride in the job he loves and does well.  Jesse has worked tirelessly and without complaint during his fight against cancer, asking for nothing.  He is an outstanding example to others, a dedicated friend to many, and a proud husband and father." - Captain Stephanie A. Buffum


The PGFD firefighting family is raising funds to assist this young man and family as they fight to save his life.  There is a Go Fund Me account and other fundraising events that everyone is encouraged to attend.

"Jesse McCullough is a beloved father to two beautiful little girls, husband to Susie, and dedicated friend to many," said Fire Captain Stephanie Buffum.  "Jesse is awaiting acceptance into a Clinical Trial and is hoping to start momentarily.  In the interim, he will continue chemotherapy.  His fight is far from over; Jesse’s fight is our fight!"

Jesse’s firefighting family want to ease the McCullough’s financial burden while they conquer this beast.  Some of the costs associated with clinical trials include travel expenses and medical bills not covered by insurance.  Both Jesse and Susie are employed; however, his treatment schedule and other pertinent factors will significantly impact the couple’s finances.   "Please find it in your heart to support the McCullough family," asks Buffum.

A fund raising event will be held this Sunday, August 26th.  Everyone is invited to attend. 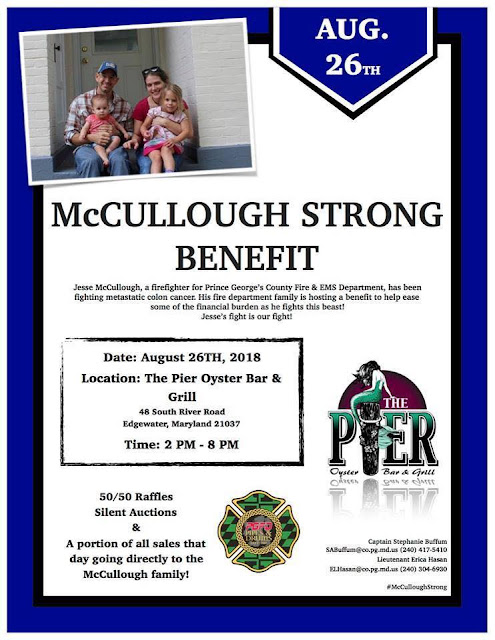 Posted by PGFD at 8:22 PM No comments: Links to this post