Fire Fighter/Medic John Bowman, 48, began his career with the Prince George’s County Fire/Emergency Medical Services (EMS) Department in July 1995. His first assignment was to District Heights Fire/EMS Station 826; however, over the years, he has worked at numerous stations throughout the county. He was initially hired as a paramedic but later cross-trained to become a firefighter. He is primarily on a medic unit but is more than capable of functioning in a dual capacity, if necessary. John, also a paramedic preceptor, has been providing training to the department’s interns for about 12 years. Several of those interns have since gone on to become officers.

Fire Fighter/Medic Bowman is a member of the Technical Rescue Team and holds certifications in Swift Water Rescue, Rope Rescue, and Boater Safety. As a swift water technician, he is responsible for rescuing live victims from moving water. Although trained to adapt to the ever-changing water environment, negotiating submerged hazards such as contamination and debris in the water, remains a risk for both Bowman and the victims.  He is currently assigned to Fort Washington Fire/EMS Station 847, one of 3 stations staffed by Technical Rescue Team members.  In addition to staffing the engine; heavy duty rescue squad; and the ambulance and paramedic units, Fire Fighter Bowman and his fellow team members are tasked with deploying the Lawrence H. Woltz Fire Boat 858 to the scene of water emergency incidents.  Fire Boat 858 is docked at the Fort  Washington Marina.

In his off-duty time, John and Juli Bowman and their children, 12 year-old Sydney and 9 year-old Randy, provide foster care for cats. The family was recently honored by Volunteer Loudon, an organization that sponsors an annual awards program to honor those in Loudon County who donate time and service to the community. The Bowmans received the organization’s “Outstanding Volunteer Family” award for their participation in the Animal Shelter Foster Program.

In 2012, despite being novices to the program, the Bowman family fostered 12 cats. Their charges included a nursing mother cat, her kittens, and several orphaned kittens with special needs that required extra care and medical attention for some of them. The Bowman s are one of only 2 foster families willing to take in orphaned neonatal kittens, commonly referred to as bottle babies. “These kittens must be fed every couple hours or so around the clock. It’s like having babies in the house again,” said John.

It was daughter Sydney’s idea for the family to become cat fosters. She did all of the research and presented her proposal. Her meticulous preparation paid off, and the Bowmans became a foster family. Says dad, “Although I am involved in caring for the cats, the real credit goes to the kids. I’m mostly the yes man.”

In the Bowman household, volunteering is as much a staple as milk or eggs. Prior to becoming a career paramedic, John was a volunteer at Laurel Fire/EMS Station 849. In addition to the family’s participation in the animal fostering program, mom Juli and the children help out at Loudon County’s food bank. Dad also volunteers as a coach for daughter Sydney’s wrestling team. 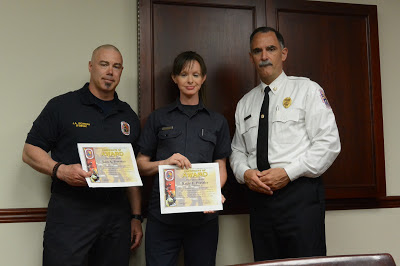 The 18-year veteran received the honor for his quick thinking and immediate action on the scene of an incident, during which he and his partner helped save the life of an unborn baby. When asked what he was most looking forward to after he retires, Bowman responded, “I have no plans to retire at 20 years and honestly haven’t thought that far ahead. I still love what I do, and I’m having fun doing it.”

John Bowman and his family reside in Leesburg, Virginia. They have two pets—Jesse, an 8 year-old pit bull they adopted from an animal rescue organization, and a 12 year-old cat, Sisco.

Posted by PGFD at 12:01 PM No comments: Links to this post