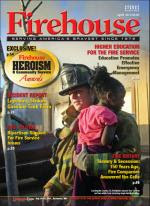 The combined career and volunteer personnel of the Prince George's County Fire/Emergency Medical Services Department (PGFD) received high honors and the most awards from a fire service trade magazine.

FIREHOUSE MAGAZINE HEROISM and COMMUNITY SERVICE AWARDS, April 2011 issue, has recognized more PGFD Firefighters then any other fire department in the Country.  PGFD awards include one of the highest honors, 2 unit citations and 19 individual heroism awards.

College Park Volunteer Fire Fighter Justin Davidson was a top award winner for actions he took in saving his own family from a fire.

Kentland Volunteer Firefighters were also awarded a Unit Citation for the rescue of a downed firefighter inside a burning Kettering home.  (this incident was inadvertently left off of last years awards and awarded this year.)

Firefighter/Medic William Vanarsdale and Bladensburg Volunteer Fire Fighter Kyle Schultz were recognized for the rescue of an adult male from his burning Lanham home.

Fire Captain Steve Gallagher and Acting Fire Fighter/Medic Lieutenant Bino Harris were recognized for their bravery in assisting county police in the removal of an unstable man from the icy Northwest Branch.

Fire Fighter/Medic Captain James Jiron was awarded for his heroism for alerting and assisting two occupants out of a burning home while he was off duty and did not have the protection of his personal protective equipment or a hose line.

Posted by PGFD at 7:22 PM No comments: Links to this post