MEDIA CONTACT: Mark E. Brady, Chief Spokesperson, 240-508-7930
Prince George’s County Fire Investigators are investigating the circumstances in which a man sustained serious burn injuries this evening.  Preliminary information indicates that a male, mid 60’s, had opened the fuel cap on his dump truck at his work site in the 6400 block of Foxley Road in Forestville just before 6:00 pm.  When he removed the fuel cap there was a sudden rush of diesel fuel vapors from the pressurized fuel tank.  These vapors ignited and engulfed the victim causing 2nd and 3rd degree burns over the majority of his body.  Ignition of the vapors was possibly caused by the victims cigarette or while he was attempting to ignite a cigarette.   The incident location is in an industrial area adjacent to Andrews Air Force Base.
With the fire extinguished, the seriously injured man knew that a volunteer firefighter worked on-site and he made his way a short distance to the volunteer and alerted him of his injuries.  The volunteer firefighter, an Assistant Chief with the Kentland Volunteer Fire Department, immediately notified dispatchers via his Fire/EMS Department issued 2-way radio and started to treat the patient.  Firefighter/Medics and the Maryland State Police Medevac Helicopter were alerted, responded, treated and transported the man to a Burn Center in “serious” condition.
There is an open and on-going investigation into this incident by Fire Investigators assigned to the Prince George’s County Office of the Fire Marshal.
Posted by PGFD at 9:30 PM No comments: Links to this post 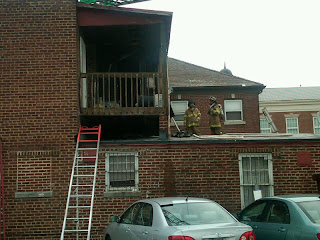 There were about 25 firefighters on the scene that required about 10 minutes to extinguish the fire.

No injuries have been reported and the cause of the fire is under investigation. Fire loss estimates are still be tabulated.

This E-mail and any of its attachments may contain Prince George's
County Government or Prince George's County 7th Judicial Circuit
Court proprietary information or Protected Health Information,
which is privileged and confidential. This E-mail is intended
solely for the use of the individual or entity to which it is
addressed. If you are not the intended recipient of this E-mail,
you are hereby notified that any dissemination, distribution,
copying, or action taken in relation to the contents of and
attachments to this E-mail is strictly prohibited by federal law
and may expose you to civil and/or criminal penalties. If you have
received this E-mail in error, please notify the sender immediately
and permanently delete the original and any copy of this E-mail and
any printout.

Posted by PGFD at 12:56 PM No comments: Links to this post