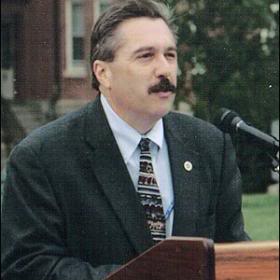 For the second time in the history of the Mason Lankford Fire Service Leadership Award it will be presented to a former Prince George's County Fire Chief.  For his outstanding leadership and commitment to improving life safety standards for our nation’s firefighters, the Congressional Fire Services Institute (CFSI) Board of Directors announced Chief Ronald J.Siarnicki, executive director of the National Fallen Firefighters Foundation (NFFF), will receive the 2013 CFSI/Motorola Solutions Mason Lankford Fire Service Leadership Award.  Former County Fire Chief and current Director of the Maryland Fire and Rescue Institute Steve Edwards was awarded this distinction in 2009.
“Chief Siarnicki has a long and rich history of bringing diverse groups together for the betterment of the fire service at the national and local levels. This award truly recognizes Ron’s leadership and commitment to those important efforts and accomplishments, as well as his contagious passion for ensuring that all firefighters have the tools and resources necessary so they can do their jobs effectively and safely, then go home to their loved ones at the end of each shift,” said Chief Dennis Compton, Chairman of the NFFF Board of Directors.
The Mason Lankford Fire Service Leadership Award was established in 1998 by CFSI and Motorola Solutions to recognize an individual who has been proactive at the local, state, or federal government level to improve fire/emergency services and firefighter life safety issues.
Chief Siarnicki joins some of the nation’s most notable fire service leaders who have set the national standard of a fire service that emphasizes preparation and readiness of all responders, including: Marcine Goodloe, Ronny Coleman, Kevin O’Connor, Steve Edwards, and Hal Bruno.
The Mason Lankford Fire Service Leadership Award will be presented at the annual National Fire and Emergency Services Dinner hosted by the Congressional Fire Service Institute.  The event will be held on MAy 9, 6:30 pm at the International Ballroom of the Capitol Hilton in Washington, DC.
Chief Siarnicki began his career as a volunteer firefighter in Monessen, Pennsylvania. He joined the Prince George's County Fire/EMS Department in 1978 and, over 24 years, progressed through the ranks to Chief of the Department. In 2001 he retired from PGFD and was appointed Executive Director of the NFFF.
Under his leadership, the NFFF has expanded services to assist the survivors of firefighters who died in the line of duty and developed programs to address firefighter safety and reduce the number of line-of-duty deaths.  One of his most important contributions to the fire service is the 2004 Firefighter Life Safety Summit which resulted in the creation of the 16 Firefighter Life Safety Initiatives.
In addition, Siarnicki has been recognized for his outstanding leadership by numerous organizations, including: The Everett E. Hudiburg Award, The Fire Engineering Lifetime Achievement Award, Alan Brunacini Fire Services Executive Safety Award from the International Association of Fire Chiefs, Metropolitan Fire Chiefs' Presidents Award of Distinction, University of Maryland, University College Distinguished Alumnus, American Burn Association's Moncrief Award and the Prince George's County Fire/EMS Silver Medal of Valor.
Chief Siarnicki holds a Bachelor's Degree in Fire Science and a Master's Degree in Technology Management from the University of Maryland University College (UMUC).

On behalf of Prince George's County Fire CHief Marc S. Bashoor and the entire career, civilian and volunteer membership of the Department we extend our congratulations to Chief Siarnicki for being chosen for this award.


Posted by PGFD at 4:36 PM No comments: Links to this post


The National Weather Service has issued a "Red Flag" Warning today for Prince George's County, MD, and surrounding jurisdictions.  This warning equates to conditions of dry air, winds and dry fuel including grass and brush that can easily ignite and spread rapidly.


Please use due diligence and care today in extinguishing smoking materials; cigarettes, cigars, etc., in a proper container.

If you see a fire call 911 immediately.

Remember, Safety First Ensures Everyone Goes Home!!!
Posted by PGFD at 9:04 AM No comments: Links to this post