Prince George’s County Firefighters and Paramedics were alerted to a motor vehicle crash with injuries that involved a loaded school bus this afternoon in Upper Marlboro.  Fire/EMS units responded to the 2:45 pm crash in the southbound lane of Route 301 about 1 mile north of the intersection of Marlboro Pike and arrived to find two vehicles involved.  A pickup truck appears to have rear-ended the bus carrying 32 students from the Barack Obama Elementary School located in Upper Marlboro.

The adult male driver of the pickup truck sustained serious injuries and was transported to a trauma center with serious, non-life threatening, injuries.

Paramedics evaluated all 32 students on board and determined only one child with a knee injury needed to go to the hospital.  The adult male school bus driver was also transported to an area hospital for a check-up of minor injuries.

With the assistance of County school officials that had arrived on location all other students were released to their parents at the scene of the crash. 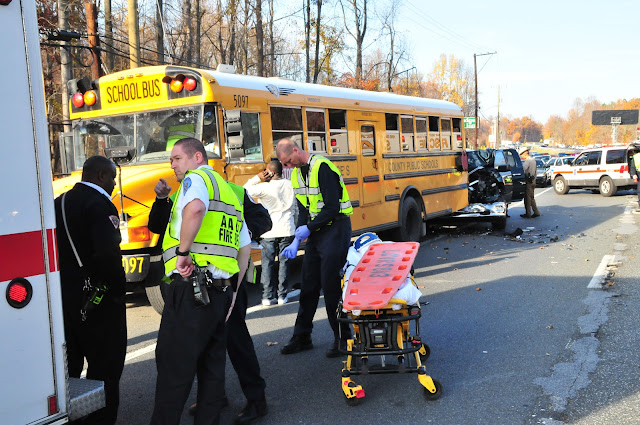 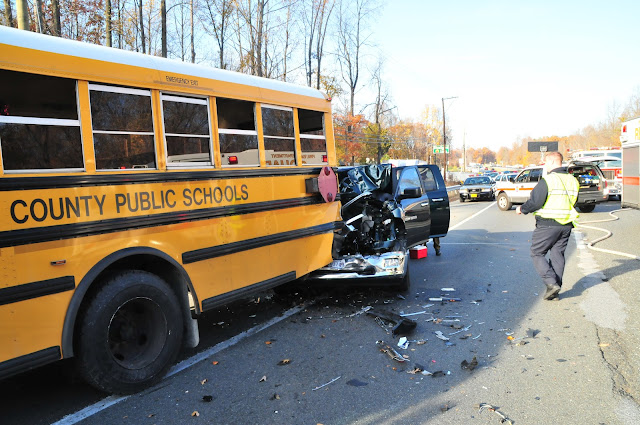 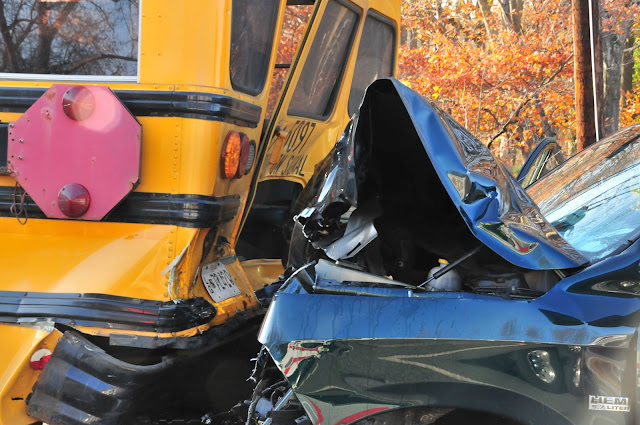 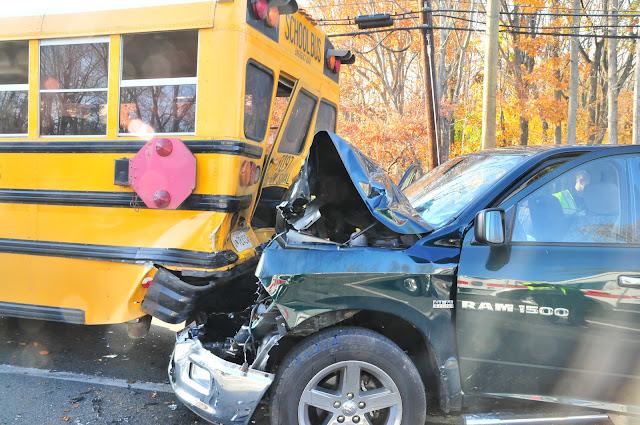 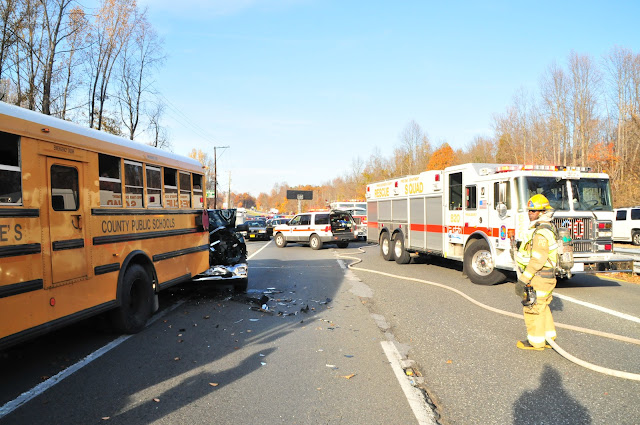 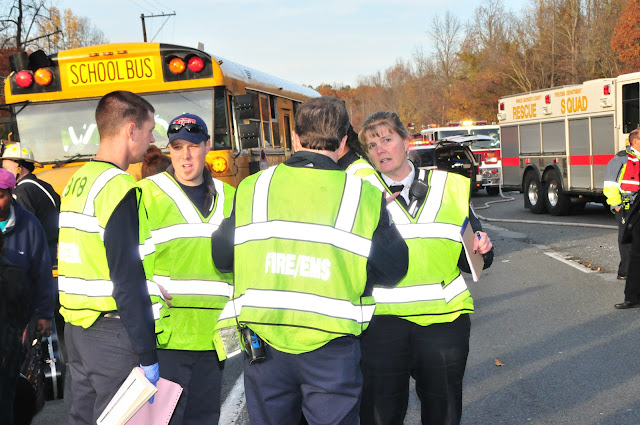 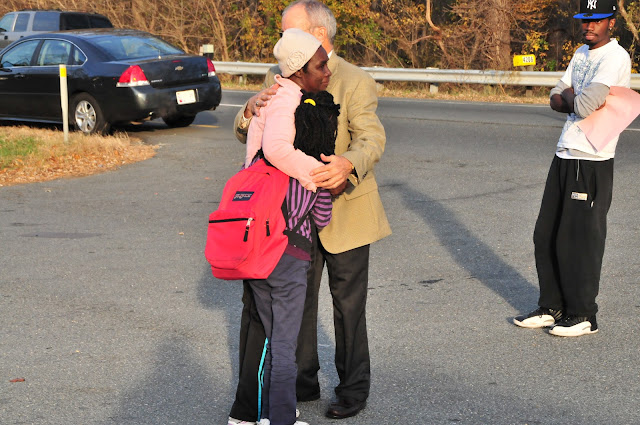 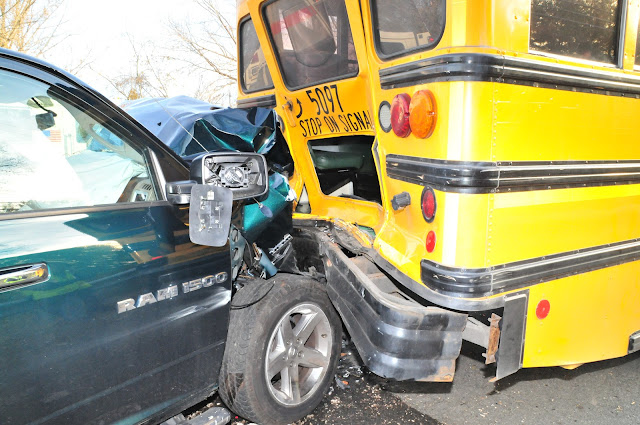 Posted by PGFD at 5:47 PM No comments: Links to this post


Most firefighters can relate to responding on a first due/arriving house fire.  Prior to their arrival at the reported location they have identified the closest fire hydrant to lay a line from to establish an adequate and continuous water supply to fight the fire.  Firefighters are familiar with fighting fire and utilizing hydrants that supply endless amounts of water, however, imagine responding on a first due house fire and you only have the water in your tank to fight the fire; this is a day in the life of a firefighter working in non-hydrant areas.  There are portions of southern Prince George’s County on the “rural-tier’ that do not have the luxury of a domestic water supply system or hydrants and local firefighters are getting creative to develop new sources of a water supply. 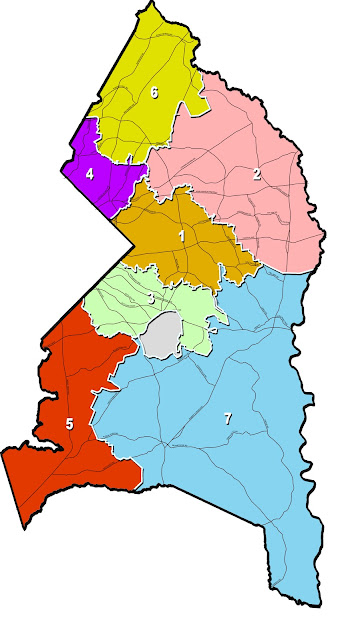 Battalion Chief Denice Dickens is the 7th Battalion Commander.  This battalion covers a large portion of the non-hydrant areas in the Southern portion of Prince George's County.  She is a long-standing member of the Rural Tier Water Supply Committee and has overseen, in addition to volunteer firefighters, several projects that have improved the water supply issue in portions of the rural-tier including the installation of underground water storage tanks and the recent addition of dry hydrants.

The “rural-tier” is exactly that – a rural setting with high environmental integrity that outlines the southernmost borders of Prince George’s County.  There are many privately owned larger homes with acres and acres of property that were used for tobacco planting.  Numerous waterfront properties and roadways throughout the area yield scenic views of the sprawling open space that has made this area desirable for residential development.

The installation of a domestic hydrant system is contingent upon development of the area, that at this time, appears to be at some point in the future.  The lack of an adequate water supply in the County’s rural tier can be quite challenging when battling a structure fire. Having water available in area streams and ponds helps firefighters only if the water is readily accessible. Water tankers can move water from distant sources, but the critical factor is whether or not the fire department can maintain an uninterrupted supply of water at the fire scene.

Installation of dry hydrants into nearby and developed water supplies eliminates the complexity of long-distance water shuttle operations. A dry hydrant consists of an arrangement of piping with one end in the water and the other end extending to dry land and available for connection to a pumper.  This arrangement also allows access to water sources from a roadway instead of having to work on soft ground immediately adjacent to the pond or stream.

In any area without water mains and domestic fire hydrants, the dry hydrant concept can provide a simple, cost-effective solution to the need for rapid access to water sources.  Battalion Chief Dickens with volunteer and career firefighters from Baden Fire/EMS Station 836, including Volunteer Deputy Chief Bobby Breen and Robert “Yates” Clagett with the Prince George’s County Soil Conservation District, have worked together to construct dry hydrants in areas that previously had lacked a water supply system.

Armed with piping donated by the Maryland Department of Natural Resources through Mr. Monte Mitchell, firefighters identified areas where a large quantity of water could be accessed.  A property owner along Dr. Bowen Road was in the planning stages for building a water retention pond for farm use and agreed to let the fire department use the pond to connect to a dry hydrant.  Trenches and holes were dug out by Battalion Chief Dickens, Volunteer Deputy Breen, Fire Lieutenant Tim Street, Fire Fighter Donald Purdy, Fire Fighter/Medic Al Green and Fire Fighter Chris Elie.  This crew completed the installation of the dry piping system which were channeled from the ground level to the bottom bed of the pond.

Five dry hydrants have been installed so far from grant money and time donated by volunteer personnel from the Baden Volunteer Fire/EMS Department and career firefighters and medics.  The recent construction of dry hydrants, after donation of pipe, cost the County $550.00; however, the advantages to residents living in these areas are priceless.

Prince George’s County Fire Chief Marc S. Bashoor commends Battalion Chief Dickens, Volunteer Deputy Chief Breen and other career and volunteer members of the Department for the planning, research and development of the dry hydrants.  “The work ethic and dedication of our firefighters to help ensure an adequate water supply, a basic necessity of firefighting, is commendable and demonstrates the high level of commitment in saving lives and protecting properties in these communities by our members,” stated Bashoor. 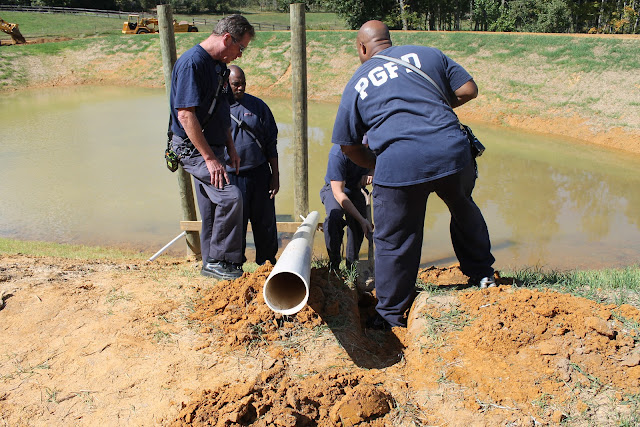 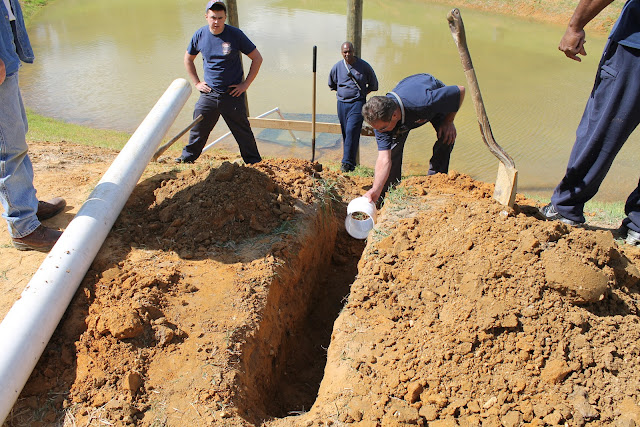 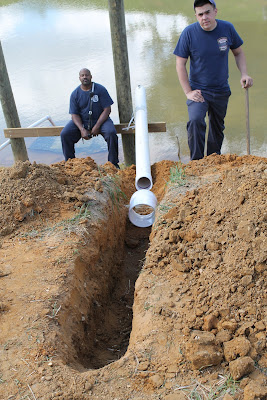 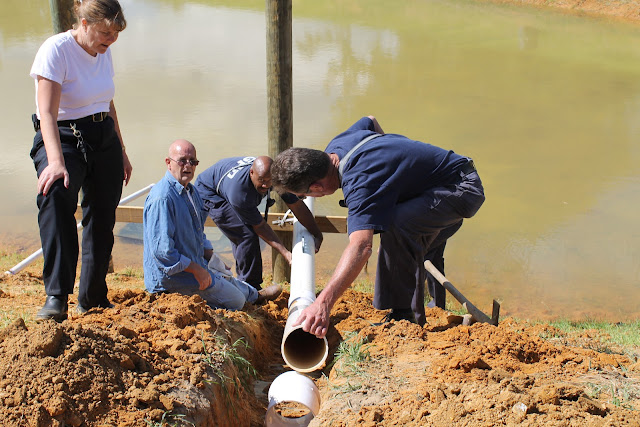 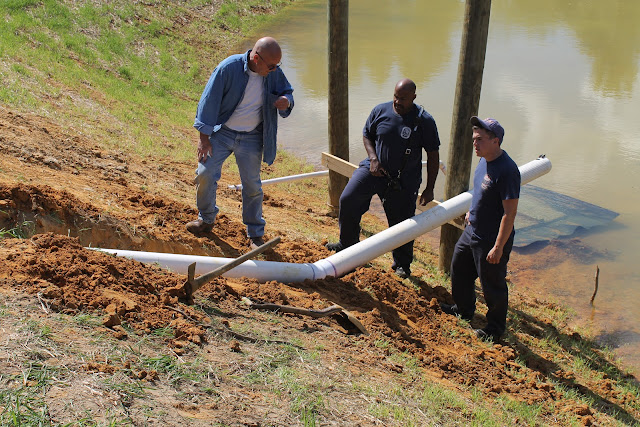 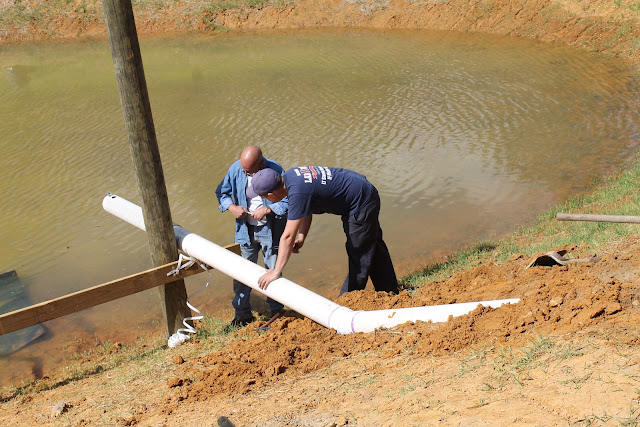 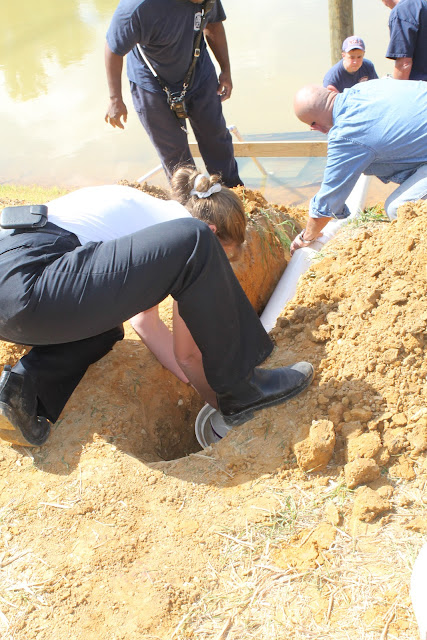 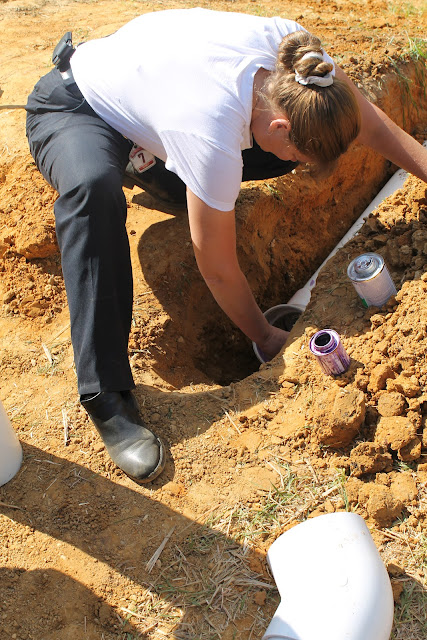 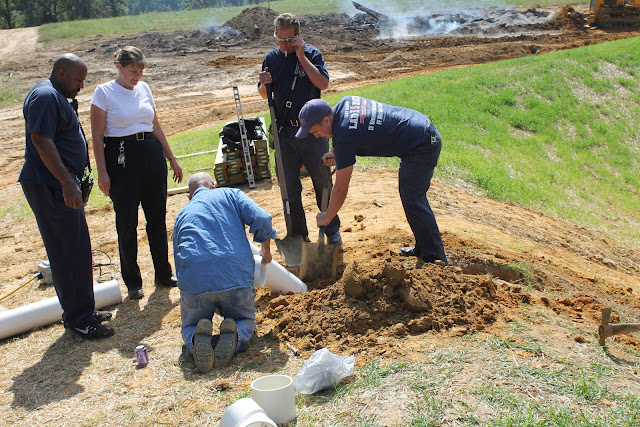 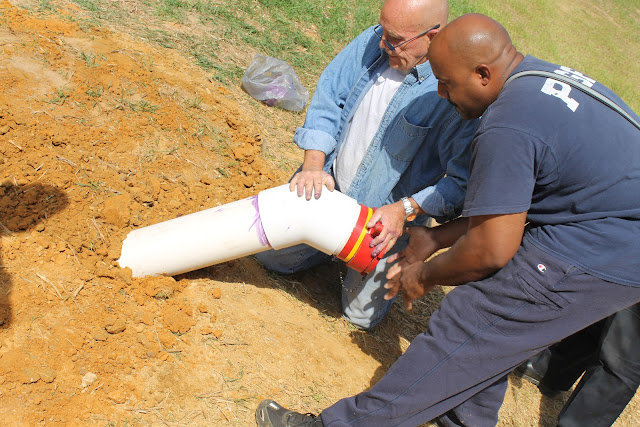 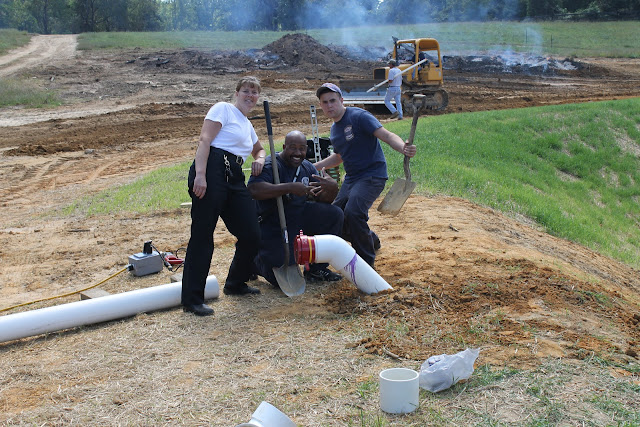 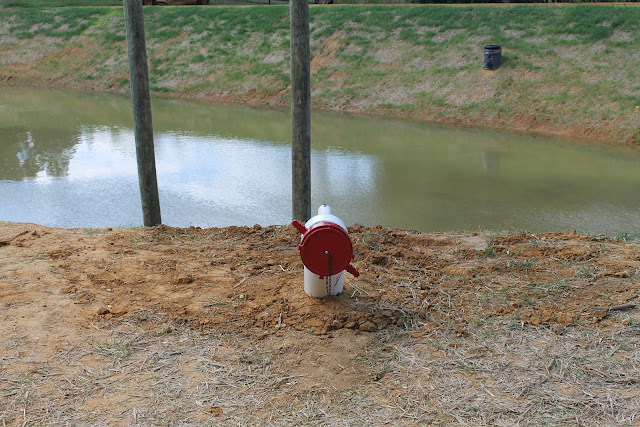 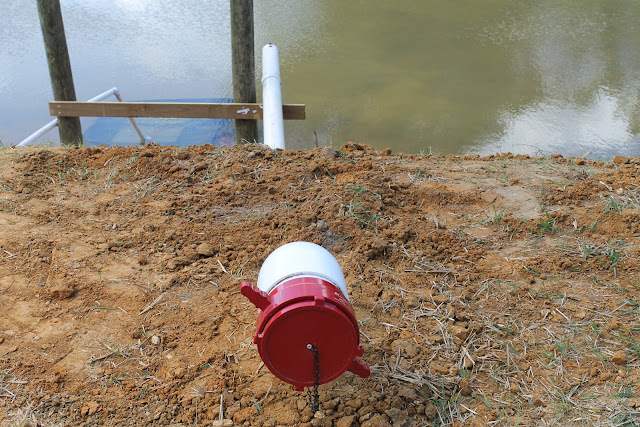 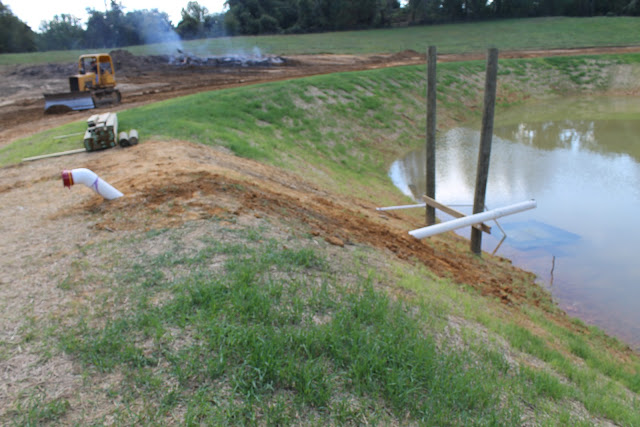 Posted by PGFD at 7:00 AM No comments: Links to this post