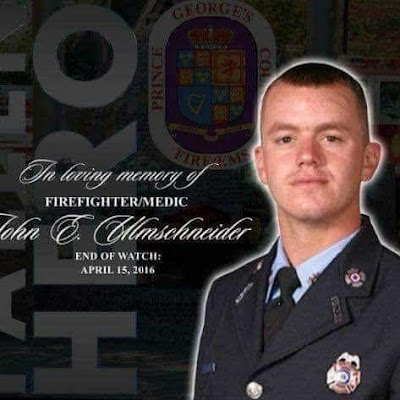 May the distance of time in no way diminish our resolve to ensure that our Fallen Heroes are never forgotten.  Let us pause to remember our Fallen Hero from the Prince George's County Fire/EMS Department, Lieutenant John E. Ulmschneider, known by most as “Skillet,” lost this day in 2016 while in response to a call.

“Skillet” was born on February 24, 1979, in Baltimore, Maryland. He moved to Prince George's County at the age of 10 and graduated from Surrattsville High School.  He joined the Prince George's County Fire/EMS Department on March 10, 2003, as a member of Career Recruit School 32.  Upon entering the field, Ulmschneider made great friends and became a great friend to many.

At approximately 1930 hours on the evening of April 15, 2016, Ulmschneider and his partner responded on Paramedic Ambulance 823 with Rescue Engine 827 to a “check on the welfare” call.  After several attempts to make contact with the home occupant, forcible entry was initiated.  Upon entry into the home, multiple gunshots were fired, leaving several wounded.  Brother Ulmschneider was fatally shot in the upper torso.

John served the Prince George's County Fire/EMS Department for 13 years.  At the time of his death, John “Skillet” Ulmschneider was 37 years old, andsurvived by his wife Dawn and their daughter Abigail.

Let us learn from their stories so that our safety today stands as a lasting tribute to those who have gone before us....and let us keep their memory forever in our hearts.

Posted by PGFD at 10:37 AM No comments: Links to this post