A fire in a terrace level apartment was quickly contained and extinguished on Sunday evening.  At around 9:30 pm, Sunday, November 29, fire/EMS units were alerted to a fire in an apartment in the 8500 block of Greenbelt Road in Greenbelt at the Gates of Cipriano Complex.  First arriving firefighters found a 3-story, garden style, apartment building with fire showing from a terrace level apartment with fire extending to the upper floors by way of exterior balconies.

The first arriving engine from Greenbelt and ladder truck from Berwyn Heights were able to quickly contain and extinguish the bulk of the fire which resulted in a stop of fire extension.  The terrace apartment suffered the most fire damage.

Upon arrival, with the possibility of fire extension to the upper floors a precautionary Second Alarm was sounded but staged and was never used.  The extension was quickly stopped with the rapid extinguishment of the seat of the fire.

No injuries were reported.  The County Citizen Services Unit and American Red Cross assisted four adults and 3 children from the 2 apartments declared uninhabitable.  Other building residents were allowed to return to their apartments.

The cause of the fire is undetermined and fire loss is estimated at $50,000.

Image provided by Bill Corrigan, Volunteer Chief of College Park Fire/EMS 812 and Incident Commander for this incident.  The image shows the fire leapfrogging from the ground floor unit to the upper floors and is easy to understand the need for a precautionary second alarm. 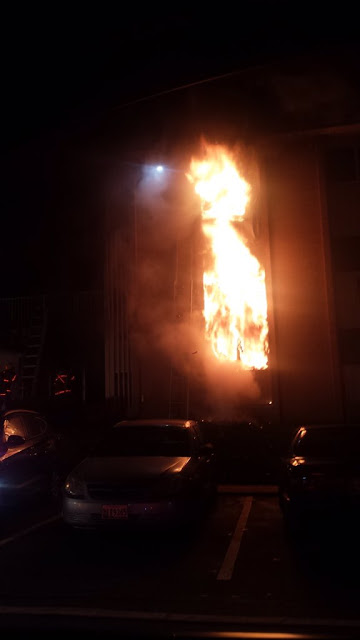 Posted by PGFD at 11:58 AM No comments: Links to this post

MD DNR Employee Assits in Rescue of Boater on Saturday


A boater was fortunate an employee of the Maryland Department of Natural Resources (DNR) was on the job.  It was a beautiful Saturday morning with temperatures above average for late November in the 60’s.  Just after 1130 am, November 28th, the Fire/EMS Department water rescue units were dispatched to a man stuck in the mud and water at Magruders Ferry Landing at 18299 Magruders Ferry Road in Brandywine.  The initial call reported that there was person stuck in the mud and water and required assistance.

DNR Wildlife Response Manager Peter Bendel had walked down to the pier at Magruders Ferry while doing his rounds at the park.  He noticed a boat about 200 yards south of the ramp with no anchor line or bowline to the shore.  He thought this was strange and watched the boat for a couple minutes and then noticed a man’s hand reach over the side of the boat (the boat was between the man and the ramp so he couldn’t see the man).   Bendel and the victim were able to verbally communicate and it was determined that the lone fisherman was stuck in knee-deep mud and higher water.

Bendel called 911 and provided his exact location to call takers at Public Safety Communications and advised them of the situation.  While fire/EMS water rescue units were responding, Bendel donned his waders and walked through the marsh to where he could see the man and make visual as well as verbal contact.  This position was critical to ensuring the safety of the man in the mud.

The ambulance from the Baden Fire/EMS Station was the first to arrive and their personnel joined Bendel.  The ambulance crew assisted in directing the Department’s Volunteer Marine Divisions airboat in to assist in rescuing the victim.  Within minutes of arrival the victim was removed from the mud and water and taken ashore where medics treated the man for exposure and exhaustion.

The victim, a male in his 70’s, had reportedly been in the water for over an hour and was transported to a nearby hospital for evaluation.  Due to Mr. Bendel’s competence in knowing that boats don’t generally just float without an anchor line and his quick response to call 911, as well as obtaining constant visual and verbal contact with the victim, the Fire/EMS Department was able to quickly remove the victim from the mud and cold water.
Posted by PGFD at 11:26 AM No comments: Links to this post

The Prince George's County Fire/Emergency Medical Services (EMS) Department recently accepted the delivery of $3.3 million worth of new life-saving EMS equipment.  The new equipment will be used on fire/EMS units throughout the County ensuring that we can deliver the highest quality of medical care to our residents.

The Prince George's County Fire/EMS Department responds to about 142,000 calls for service each year.  80% of those calls are for EMS related incidents.

The equipment will be on display and demonstrations provided prior to the equipment being distributed.

WHAT:      Press Conference to display and demonstrate new EMS equipment.

Posted by PGFD at 10:43 AM No comments: Links to this post