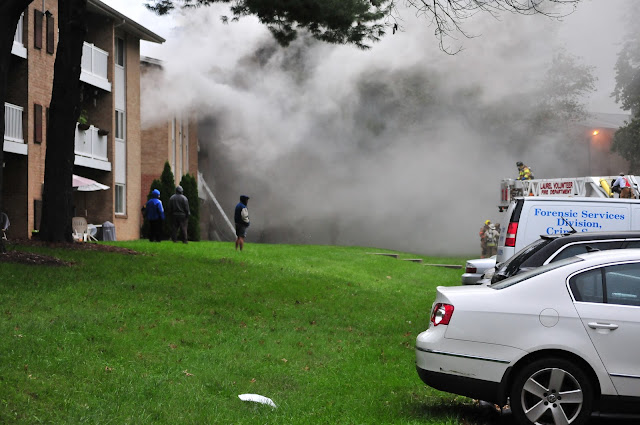 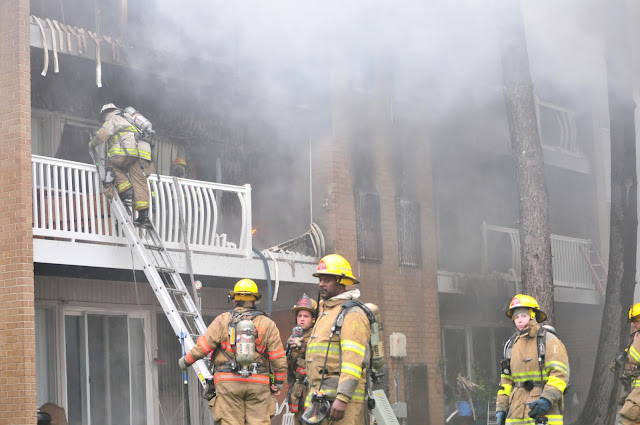 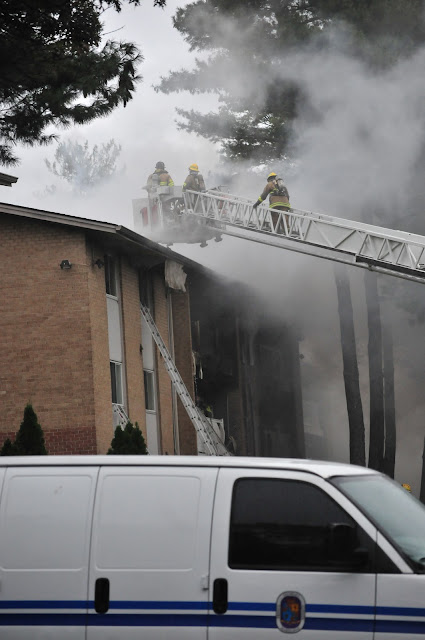 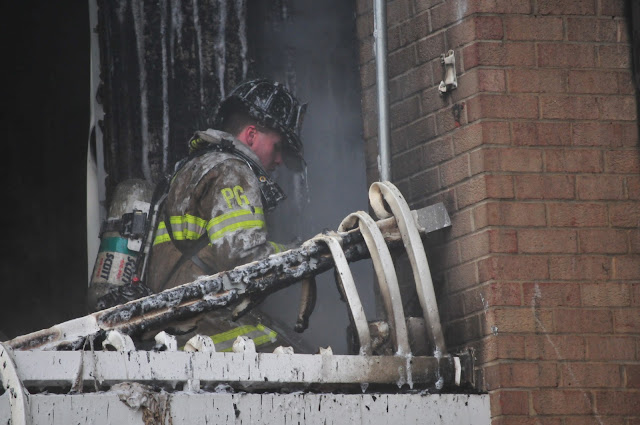 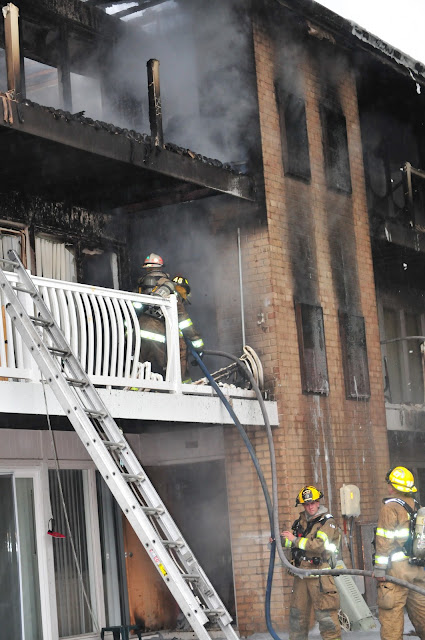 Media Contact: Mark E. Brady, Chief Spokesperson, 240-508-7930
At about 4:30 this afternoon, Saturday, October 1, a fire erupted at a 3-story garden apartment building in the 8800 block of Hunting Lane in Laurel. Firefighters from Laurel Rescue Squad were the first to arrive and found heavy smoke from the roof and fire on the top two floors in the rear. A Second Alarm was sounded bringing 65 firefighters and paramedics to the scene. It required about 15 minutes to knock down the bulk of the fire. There were no civilian or firefighter injuries. A 2 year old cat, "Blackberry," was found after the fire had been extinguished, removed unharmed, from a second floor apartment and reunited with his owner.

The fire appears to be accidental and started by malfunctioning furnace. The furnaces are located on the balconies of these apartments. Fire loss is estimated $250,000.

Thirteen apartments between 2 buildings have been declared uninhabitable. A total of 29 residents will be displaced.  They are being assisted by the County Citizen Services Unit, American Red Cross and apartment complex management.

Posted by PGFD at 6:16 PM No comments: Links to this post


The ceremony included members of the Prince George's County Volunteer Fire and Rescue Association (PGCVFRA), Ladies Auxiliary, Fire Chief Marc S. Bashoor as well as family, friends and guests of inductees to the Founders Circle.  In addition to unveiling of the memorial stones a tribute to the 38 firefighters that made the ultimate sacrifice was made.  The names were read and representatives placed a flower in a pair of firefighters boots. 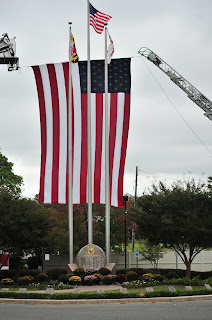 This years Founder Circle Inductees are: 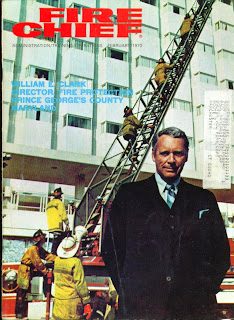 William E. Clark  began his long and distinguished fire service career in 1937, serving 20 years in the City of New York (NY) Fire Department, eventually rising to the rank of battalion chief. He was also a veteran of  the U.S. Marine Corps, having served abroad during World War II.

Following his retirement from FDNY, Clark went on to serve as chief of fire protection for Union Carbide Plastics in New Jersey and supervisor of fire service training for the state of Wisconsin prior to his selection and appointment as director of fire protection for Prince George`s County.   Serving here but a few short years, Clark was instrumental in paving the way for our transition to a unified department just prior to the establishment of Charter Government in 1970.

Following his service to Prince George's County, Clark was appointed superintendent of the Florida State Fire College in Ocala, Florida, where he authored the textbook, "Firefighting Principles and Practices" which is still widely used today.

Clark is also credited with being a founding member of the International Society of Fire Service Instructors and served as its president of that organization from 1962 through 1965. He chaired the National Fire Protection Association`s Committee on Protective Equipment and the International Association of Fire Chief`s Committee on Education and Training and was a member of the IAFC`s committees on training, rural fire protection, and firefighter standards.

After an amazing 41 years serving fire departments throughout America, having lectured in more than 40 states and in seven countries worldwide, Clark and his wife retired to St. Petersburg, Florida, in 1978. He  passed away there in September 1995 at the age of 81.


The family of William E. Clark was unable to attend today but passed along comments that they requested to be read at today's ceremony. 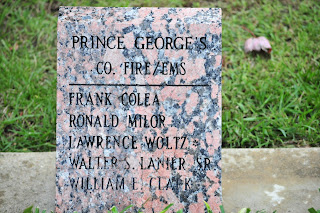 On behalf of the Clark family I would like to extend a thank you for inviting us to attend today’s ceremony. I apologize we are unable to be here in person.  Mr. Brady contacted me to explain the tribute you are bestowing upon our father and asked me if I would say a few words on behalf of the family.

My father had a true love and passion for the fire service and that was a driving force in his quest for knowledge, advocacy for firefighter safety and emphasis on proper training techniques.  He was progressive, an innovative thinker and always willing to accept new projects. I believe that is why he relocated to Prince Georges County. Remember in that era regionalization was a concept, not a practice and he was eager to accept this new challenge. He enjoyed working here and was proud of the many accomplishments of the Prince Georges County Fire Service.  I hope people will have an opportunity to view the article in Fire Chief Magazine about the Price Georges County Fire Service and my father. He was very proud of his work here and I remember he had a copy of that magazine hanging in his office in Florida.
My brothers, sisters and I are humbled you are paying such a high honor and lasting tribute to our father. We are very proud of our father’s accomplishments and it is a truly heartfelt thank you I wish to extend from my family members and myself.
Sincerely,
LT. John Clark
City of Madison Wisconsin Fire Department 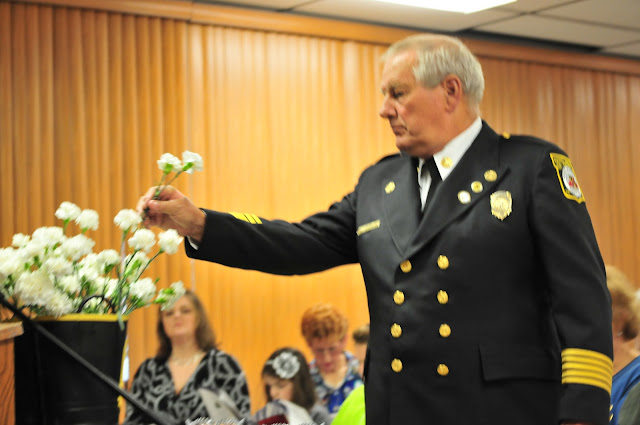 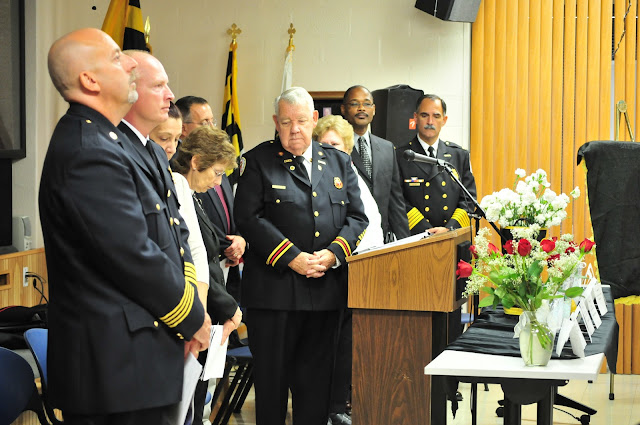