Prince George’s County Firefighters extinguished a fire in a Fort Washington home for the second time in 36 hours this afternoon and the homeowner is no stranger to the fire service.

On Sunday evening at around 7:30 pm, firefighters from the Fort Washington area were alerted to a house fire in the 12100 block of Lihou Court.  They arrived to find heavy smoke coming from the attached garage and the roofline where the garage and house meet.  The fire was quickly contained and extinguished.  No injuries were reported and the family was displaced and stayed with family members.  The cause of Sunday’s fire was determined to be accidental and attributed to an unattended grill being used too close to house exterior.  Fire loss was estimated at $5,000.

The family returned to the home this morning to start collecting personal items.  A contractor was hired to begin the fire restoration and cleanup and they were also working in the house when a fire broke out on the second floor.   For the second time within 2 days the family escaped a fire in their home safely and without injury.  The contractors also escaped without injury.  Firefighters arrived and required about 30 to 40 minutes to extinguish the fire.  One firefighter sustained a small burn injury to his foot and was transported to the Burn Unit for treatment.  It is anticipated he will be treated and released today.  Today’s fire remains under investigation, however, is not considered suspicious.  A preliminary fire loss is estimated at $100,000.

Theodore Coleman, Fire Chief in the District of Columbia from 1983 to 1988, owns the home.  He was on the scene during both incidents.  Despite suffering a second fire at his home, Coleman's biggest concern today was for the firefighter that was injured.  He wanted to leave and go to the hospital and visit with him just as he did when he was the Fire Chief.  Former Chief Coleman was re-assured the injury was minor and the firefighter would be released this afternoon.  He and other family members will be staying with his daughter that lives in the area until his home can be repaired.

Firefighters were able to salvage many momentous and photos from when he was the DCFD Fire Chief.  The items were packaged up and brought back to his daughter’s house by family members. 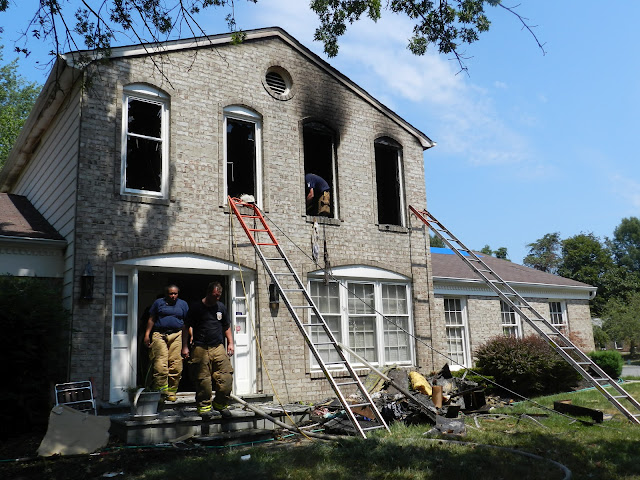 Posted by PGFD at 2:23 PM No comments: Links to this post

In Prince Georges County, Monday, August 13, there were 3 successful uses of Automatic External Defibrillators (AEDs) in 3 different areas of the county within a two hour time frame, two cases in which bystanders initiated CPR.

10:48 am – Crews were dispatched for a reported Cardiac Arrest in front of Cipriano Woods Apartments 8627 Greenbelt road.  Engine 848, West Lanham Hills, was first to arrive on the scene, and found a bystander performing CPR on a male in his 70’s, the crew continued CPR and attached the patient to an AED, and shocked the patient several times until the arrival of advanced life support (ALS) which was the Northern EMS Duty Officer. Upon his arrival and assisting with patient care the EMS Duty Officer placed a paramedic unit originally dispatched to this call in-service which played a key role in the next incident. The EMS Duty Officer and Paramedic Officer from E848, continued resuscitation efforts in A814, Berwyn Heights,where a pulse was restored and the patient was transported to a nearby hospital where he was stabilized and shortly air lifted to another hospital for more extensive cardiac care.

10:54 am – Crews were dispatched to a reported Cardiac Arrest at the CVS Store at  5700 Riverdale Road.  E813B, Riverdale Heights, arrived on the scene within 4 minutes to find a bystander performing CPR to an approximate 60-year-old male.  The engine crew from 813B took over CPR, placed the patient on their AED and shocked the patient, continued CPR, and transferred care to MD844, Chillum, who arrived shortly after being diverted from the above incident.  Medic 844’s crew continued resuscitation efforts, working with the engine crew and A813, and transported the patient who’s pulse was restored to a nearby hospital.  The patient has since been admitted to the ICU.

12:26 pm – A820, Upper Marlboro, and Medic 845, Croom, were dispatched to a reported seizure at the McDonalds, 15475 Marlboro Pike in Upper Marlboro.  A820 arrived approximately 3 min after dispatch to find and approx 50-year-old male pulsless and apnic.  The crew quickly began CPR, attached the patient to an AED where the patient was shocked 1 time, and cpr was continued.  The crew from A820 transferred care to the arriving medic unit MD845 who continued resuscitation efforts, restored a pulse, and because of transport time, they were able to initiate the new hypothermia protocol in Maryland (where a patients who’s pulse is restored to rapidly cooled to improve functional recovery of vital organs) and transported the patient to Southern Maryland Hospital, where the patient unfortunately passed away two hours later.

Fire Chief Bashoor, upon hearing of these incidents, stated, "I commend everyone involved, the citizens, firefighter/medics and hospital staff for providing the best possible chance of survival for these victims.  Job well done."

These incidents illustrate the need for the 4 links in the American Heart Association Chain of Survival which are; Early access to Emergency Care (911), Early CPR (Bystander/citizen), Early Defibrillation (AED), and Early Advanced Care (paramedics/Emergency Room).  Every first line piece of fire apparatus and basic life support (BLS) units in the County are equipped with AED’s to provide this early access to defibrillation, and our ALS units are equipped with more advanced defibrillators.

Anyone interested in learning CPR and how to use an AED should call the Fire/EMS Departments Safety First CPR Information Line at 301-864-LIVE.  YOu will hear locations where these life saving techniques are taught.

Credit: Firefighter/Medic Lieutenant Bryan M. Spies, Quality Assurance in the EMS Office, for providing information for this report.
Posted by PGFD at 9:22 AM No comments: Links to this post