Throughout the month of December, members of the Prince George's County Fire/EMS Department participated in several holiday events to benefit members of our communities.  Toys for Tots and the Public Safety Food Baskets are just two examples where our civilian, volunteer and career members are provided with opportunities to interact with County residents in a festive and joyous fashion.

There are occasions when members of the community may not have been able to participate in these charitable events but our firefighter/medics become aware of their situation through incidents, word-of-mouth or family members.  The Department's First Battalion became aware of such a family and were able to present toys and food that will enable a Landover family, including 6 and 9 year old girls, to enjoy a festive Christmas Day.


Posted by PGFD at 2:42 PM No comments: Links to this post

The Prince George’s County Fire/Emergency Medical Services Department regretfully announces the death of a man that had sustained critical burn injuries earlier this month.  Just before 3:00 pm, December 5th, an adult male employee of an auto parts store had just completed removing a fuel tank off of a vehicle.  When the man walked near an open flame (from a burn barrel being used for warming) the fuel vapors ignited causing burn injuries to about 75% of his body.  Bystander’s extinguished the fire.

Firefighter/Medics arrived on location in the 9100 block of Allentown Road in Fort Washington, initiated treatment and summoned a helicopter to fly the man to the Burn Unit at Medstar Washington Hospital Center.

The victim in this incident succumbed to his injuries on December 13, 2018.  He is identified as:

Christopher Terry, 51 years of age, from Clinton, Maryland.
Posted by PGFD at 1:43 PM No comments: Links to this post

Arrest Made in College Park Arson

A man was arrested for setting fire to a College Park commercial strip center early this morning.  Just before 2:00 am, Friday, December 14th, firefighters arrived at the scene of a 1-story commercial structure that several businesses occupy in the 10000 block of Rhode Island Avenue.  Units arrived to find fire showing from a middle of the row business.  The well-advanced fire extended to attached businesses on both sides before being extinguished.

The building of origin is a mental health facility going by the name of “On Our Own”.

The fire was quickly extinguished and no injuries were reported.  Personnel form the Fire/EMS Department Office of the Fire Marshal determined the fire was incendiary in nature.  Fire loss was estimated at $250,000.

Shortly after firefighters arrived on the scene a suspect was identified and taken into custody by law enforcement officials.
The suspect, Paul Franklin Willis 3rd (DOB 01/24/1981) of no fixed address, has been  charged with starting the fire at 10007 Rhode Island Avenue.   Charges include:

A Laurel, Maryland, home suffered significant fire damage and the family has been displaced after a fire started accidentally in a bathroom exhaust fan.  Just after 5:00 pm, Friday, December 7, 2018, firefighters responded to a report of a fire in a 2nd floor bathroom at a townhouse in the 7600 block of Woodbine Drive.  An investigation revealed that the fire originated in the ventilation fan located in the ceiling of the bathroom.  The fire spread into the attic area generating an estimated $50,000 in fire loss.  Fortunately there were no injuries.
Exhaust fans are found in most residences and many commercial properties to help prevent steamed up mirrors, damp walls, and fogged windows along with removing odors. However, they can also present a potential fire hazard if not cleaned and maintained on a regular basis. Fans, over time build up lint which can cause the motor to overheat and ignite the lint, plastic fan blades and the nearby combustible wood structure. The speed at which the lint builds up is a function of the amount of use and the amount of particulate in the air in which it operates.
These fans are not designed to last forever and many are original installs.  Older exhaust fans are not thermally protected. Thermal protection causes the motor to shut off should they seize and overheat. This safety feature has been available since the late 1970’s, but was not widely used until the early 1990’s. If you have a bathroom exhaust fan in your home, clean it twice a year.  If it starts to make noises or smells odd, it’s time to replace it.
The following photos demonstrate exhaust fans that need cleaning to prevent overheating and possible unintentional fire in your home. 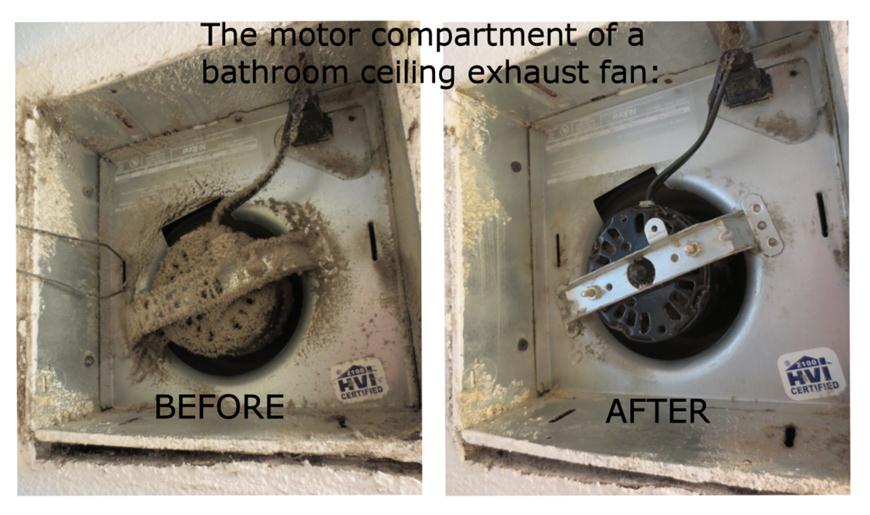 ACTION STEPS YOU CAN TAKE TO PREVENT THIS:

·
·      Inspect and clean all bathroom exhaust fans as necessary and per the manufacturer’s recommendations, be sure to place on a regular cleaning schedule.

·      When cleaning, remove the fan cover to clean and remove lint from around the motor, paying careful attention to all air-flow areas.

·      Wash the fan cover in warm soapy water to remove all lint. If there is any mold growing, add bleach to the cleaning mixture. Make sure the cover is completely dry before putting it back up.

·      If some fans are not easily accessible for regular cleaning, or appear to have evidence of heat damage, or do not turn freely, they should be replaced with thermally protected units.

·      Please remember that bathroom fans should only be used for brief periods of time, such as during a shower. Many people run them excessively or even forget that they are on. Consider installing a timer switch instead of a manual switch to limit the unnecessary use of the fan. Turn off all fans as soon as they have done the job.

·      Turn exhaust fans off at night and before you leave the house.

Install 10-year smoke alarms and, if needed, a carbon monoxide detector on every level of your home (Maryland Law) and consider installing smoke alarms in every bedroom and sleep with your bedroom door closed.

Posted by PGFD at 2:11 PM No comments: Links to this post 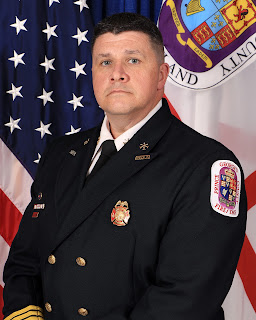 “I congratulate Assistant Chief Krichbaum on attaining the designation of Chief Fire Officer,” said Fire Chief Benjamin Barksdale.  “He joins an exclusive group of men and women who have demonstrated their dedication to the fire service and commitment to continued growth.”

Assistant Chief Krichbaum is one of about 1,300 CFO’s worldwide.  The CPC awards this designation only after an individual successfully meets all the organization’s stringent criteria.  The process includes an assessment of the applicant’s education, experience, professional development, technical competencies, contributions to the profession, association membership, and community involvement.  In addition, all applicants are required to identify a future professional development plan.

Krichbaum has over 24 years of service with the Department and currently serves as Commander of the Fire/EMS Training and Leadership Academy.

Posted by PGFD at 4:34 PM No comments: Links to this post

An adult male sustained critical burn injuries at a Fort Washington auto parts store this afternoon.  Just before 3:00 pm firefighters and medics from the Allentown Road Fire/EMS Station 832 were alerted to respond to an auto parts store in the 9100 block of Allentown Road.  Upon arrival they found a man with critical burn injuries about the majority of his body and a fire that had already been extinguished that involved a vehicle gas tank.

Medics initiated treatment and summoned the Maryland State Police Trooper 2 to fly the critically injured man to a Burn Unit.

The Fire/EMS Department’s Office of the Fire Marshal is investigating the cause of the fire.  At this point the cause is under investigation and the man is in critical condition.

No additional information is currently available.
Posted by PGFD at 5:09 PM No comments: Links to this post