Posted by PGFD at 3:06 PM No comments: Links to this post

These promotions were effective November, 27.  Congratulations to these individuals for earning these promotions through study, hard work and determination!!!

Posted by PGFD at 1:49 PM No comments: Links to this post 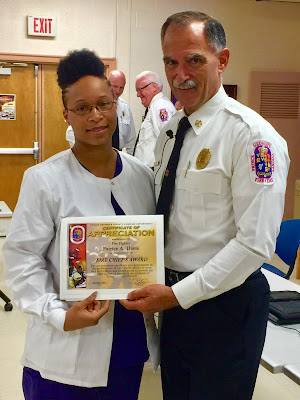 Fire Chief Marc Bashoor presented Davis with the award based on a very favorable recommendation by retired Assistant Fire Chief Steve White.  The award was presented during a Departmental Staff Meeting at the Fire Services Building in Landover Hills, Maryland.

Not every role or assignment within the Fire/EMS Department generates the accolades common to those involving feats of valor.  Often times it is the individuals in support roles who truly make the operations of the organization run smoothly.  You are one such individual, according to Assistant Fire Chief Steve White, who stated the following:

It has been my pleasure working with Fire Fighter Davis, who is assigned to the Watch Office on B-shift.  She has continually gone above and beyond her normal duties in this assignment and works diligently to ensure the Command Log, Smoke Detector reports, and other reports are accurate and complete.  She is professional and takes great pride in making timely notifications and communicating precise information.

As an example of Fire Fighter Davis’ diligent work efforts, there was a large influx of smoke detector requests.  For a couple of days the list of more than 150 requests was unorganized and difficult to decipher. Upon arriving for her shift, Fire Fighter Davis took the initiative to organize the list and make sure each Battalion Chief had all the information needed to move forward in the completion of each request.  The compilation and organization of the large amount of requests made the process of replying accurately much easier on both the Battalion Chiefs and field personnel.

This type of self-motivation is what makes Fire Fighter Davis such an invaluable asset to B-shift, the Watch Office, and the Fire/EMS Department as a whole.

Chief White also informed me of an email he received from one of his Battalion Chiefs, in which the officer said, among other things, “Fire Fighter Patrice Davis is a great employee who cares about doing a great job and is pleasant to deal with.  Employees like her make
coming to work enjoyable.”

The consistent excellence you demonstrate in the performance of your duties, ability to work well with others, and commitment to provide the highest caliber of service to the residents of Prince George’s County are admirable and worthy of recognition. Your efforts distinguish you as a positive role model for your peers and a valued member of our Department.  For these reasons you are hereby awarded the Fire Chief’s Award.

Thank you for a job well done!
Posted by PGFD at 1:30 PM No comments: Links to this post