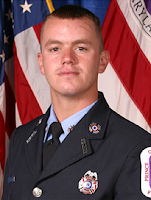 The Prince George’s County Fire/Emergency Medical Services (EMS) Department will hold a Candlelight Service to honor Fire Fighter/Paramedic Lieutenant John “Skillet” Ulmschneider, who was killed in the line of duty.  This event will also recognize critically-wounded Volunteer Fire Fighter Kevin Swain and two other volunteer firefighters from the Morningside Volunteer Fire Department, Inc., who were injured.  Both the Ulmschneider and Swain families, the entire Fire/EMS Department, family and friends, and the public are invited to attend.

Attire is the “uniform of the day” or casual, as appropriate.  Attendees may park in the rear of the Cranford/Graves Fire Services Building, rear parking lot of Landover Hills Fire/EMS Station 830, and on the street.

Please direct inquiries to Assistant Chief Alan Doubleday in the Office of the Fire Chief, 301-883-5203.