There may be a potential killer creeping silently through your home right now. That killer is carbon monoxide.  The poisoning deaths of five Oxon Hill residents in late April is a terrifying reminder that accidental carbon monoxide (CO) poisoning can happen any time.

There is no typical situation for accidental carbon monoxide poisoning. This one happened from a faulty heating system but can easily happen with any fuel-burning source used in or near a home. The Office of the Chief Medical Examiner announced the official cause of death to all five of the victims was accidental and caused by Carbon Monoxide Toxicity.  The Fire/EMS Department urges everyone to take this time to make sure they install CO alarms to protect families.

Since November 2009, a total of ten major carbon monoxide poisoning incidents have been reported in Prince George’s County.  All together, these ten significant incidents resulted in the tragic death of eight of our citizens, as well as forty-five life-threatening exposures that were serious enough to warrant medical evaluation and/or hospital treatment.  Last year alone, our Department responded to nearly eleven hundred individual reports of CO alarm activations, and detected nearly ninety significant CO leaks.  Our statistical reporting shows these numbers have experienced an increase of nearly ten percent each year.
Carbon monoxide is an odorless, colorless gas that is produced when any fuel - such as gasoline, propane, natural gas, oil, wood, or charcoal – is improperly burned or insufficiently vented while burning. Fuels of this type are consumed not only in heating appliances during cold weather, but in other household appliances such as, ovens and ranges, water heaters and clothes dryers, as well as a multitude of engine-powered portable equipment such as generators and pressure washers.  Additional sources of CO include vehicle exhaust, blocked chimney flues, fuel-burning cooking appliances used for heating purposes, and outdoor cooking appliances such as charcoal grills used inside a home or garage.
The greatest danger to all of us is that CO is a silent killer.  Unlike smoke, carbon monoxide is invisible.  It has no smell or taste to warn you of a dangerous buildup.  CO is especially dangerous because when it is inhaled, this toxic gas enters the bloodstream and replaces the oxygen molecules found on the critical blood component hemoglobin.  It displaces oxygen in the blood, depriving the heart, brain, and other vital organs, depriving them of oxygen necessary for their function.
Large concentrations of CO can overcome an adult in a matter of minutes and a child or senior in less than half that time.  Without warning, it can cause you to lose consciousness.  If sufficient concentrations are allowed to build, the gas will eventually suffocate the victim to death.
CO poisoning is often mistaken for other illnesses, such as the flu. The most common symptoms include headache, fatigue, nausea, vomiting, and confusion.  Often, more than one person in the household will suffer symptoms at the same time.
Prince George’s County Fire Chief Marc S. Bashoor said, “Right up until - and even beyond - the onset of active symptoms of CO poisoning, unless you are protected by a working CO detector, you have absolutely no way of knowing you have a carbon monoxide leak.” 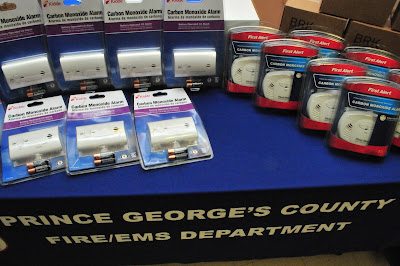 Since the Oxon Hill tragedy there has been an outpouring of generosity from our community and corporate partners.  Two of the leading manufacturers of smoke alarms and CO detectors, Kidde and First Alert, donated 200 carbon monoxide alarms each.  An anonymous group donated 100 and 1-800-BOARD-UP another 25.  PEPCO has announced that they will increase to their annual donation of 1000 smoke alarms, an additional 200 carbon monoxide detectors.  Other groups and corporations have pledged to support our effort and provide additional CO detectors to our Safety First program.  Hundreds of carbon monoxide alarms will be distributed to Prince Georgians who may not have the means to purchase this valuable protection.  These donations to the county will certainly extend our efforts in support of County Executive Baker’s Transforming Neighborhoods Initiative.
“Corporate and community support has been tremendous,” said Fire Chief Bashoor. “The cost of these life saving devices prohibits some families from purchasing them, we now have some resources and pledges of continued support to keep families safe from the dangers of CO just as we have our smoke alarms.”
The Fire/EMS Department will be distributing these on a first contact basis through our Safety First-Everyone Goes Home program.   If you cannot afford to purchase this enhanced protection for your home, simply call 301-864-SAFE (7233) and we will schedule for personnel from your local fire/EMS station to not only deliver the alarm to you free of charge, but to also install it for you.  For our citizens who can afford to purchase their own alarm, we also invite you to call Safety First phone number and we will be more than happy to come to your home and properly install your unit for you.  It really is that easy.
The combined career, civilian and volunteer men and women of the Prince George’s County Fire/EMS Department offer these tips…

To decrease risk of CO poisoning, we recommend:
·     Install a CO alarm outside every sleeping area and on every level of your home - at least 15 feet away from every fuel-burning appliance to reduce the number of nuisance alarms.
·     Test alarms on the first day of every month (Safety First Day of the Month) and replace them every five years. Practice an escape plan with your entire family.
·     Have all gas, oil or coal burning appliances inspected by a technician every year to ensure they are working correctly and are properly ventilated.
·     Never use a stove for heating.
·     Do not use a grills, generators or camping stoves inside your home, garage or near a window.
·     Never leave a car, SUV, or motorcycle engine running inside a garage, even if the garage door is open.
If your CO alarm goes off:
·     Get everyone out of the house as quickly as possible into fresh air. Then call for help from a neighbor’s home or a cell phone outside of your home. If anyone is experiencing CO poisoning symptoms, make sure to let the 911 operator know so we can assure you get necessary medical attention.
·     Once out, stay out - the fire department will let you know when it is safe to re-enter your home.
A CO Safety Tip Sheet is located on our News Blog at http://www.pgfdnews.com/.  This document, available in both English and Spanish, can be downloaded and printed out for distribution at schools, community and civic events and businesses.

Please note that carbon monoxide alarms do not replace smoke alarms. Both are required to keep families safe.

Chief Bashoor acknowledged the work of local utility companies during this time of tragedy by saying; “I want to thank PEPCO, Washington Gas and WSSC for their assistance and offers to help us educate our residents about CO and the proper installation and upkeep of gas appliances.  The Fire/EMS Department looks forward to working with our utility companies and their active participation in upcoming safety initiatives supporting County Executive Baker’s Transforming Neighborhoods Initiative.”

Posted by PGFD at 9:03 AM No comments: Links to this post