Several members of the Prince George's County Fire/EMS Department were recognized for their actions on recent incidents.


On the afternoon of Friday, April 22, 2016, Retired Lieutenant Colonel Tyrone Wells and Assistant Fire Chief Darren Ware were in the area of Crain Highway (Route 301) and Brandywine Road when they observed a car on fire.  Upon stopping to provide assistance, Assistant Chief Ware ran to the vehicle and discovered the female driver still inside.  He attempted but could not to open the door, and the woman was unable to respond to his instructions to unlock the door.  At that time, Tyrone Wells, assisted by an unidentified citizen, used a heavy hand tool to break the rear window on the driver side and the passenger side front window.

During the initial extrication attempt, the driver, who appeared to be suffering from a medical condition, had pushed on the accelerator.  This caused her vehicle to move forward and further down an embankment, preventing access from the driver side.  Chief Ware and the citizen pulled the woman through the passenger side window and carried her up the embankment and away from the burning vehicle.  Fortunately, she did not incur any injuries from the accident but was transported to the hospital for suffering from an unknown medical emergency. 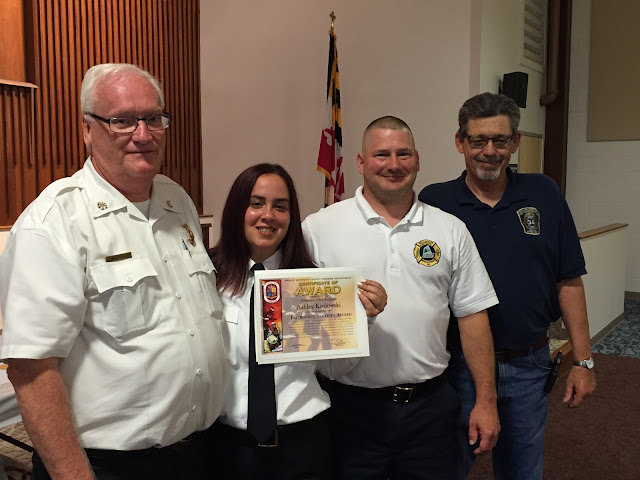 Greenbelt Volunteer EMS Sergeant Ashley Kozlowski received her Emergency Services Award for stopping and providing EMS assistance to the female pulled from the vehicle.  She was presented her award by Deputy Fire Chief Jim McClellan along with Greenbelt Volunteer Chief Tommy Ray and Association President Chuck Walker at the Prince George's County Volunteer Fire and Rescue Association meeting in Laurel on Wednesday, July 13.

While presenting the Emergency Services Awards, Fire Chief Marc Bashoor/Deputy Fire Chief McClelland stated,  "Your performance on the scene of this incident saved the victim’s life and is commendable and worthy of recognition.  Therefore, you are hereby awarded a Fire/EMS Department Emergency Services Award.  Your actions reflect well on you both personally and professionally and exemplify the excellent caliber of service we strive to provide to the residents of Prince George’s County."

OFFICE OF COMMUNICATIONS AND COMMUNITY RELATIONS

Movie Production to Include Special Effects in Bowie Area

The Prince George’s County Fire/Emergency Medical Services (EMS) Department has been made aware of a movie production company that will be working in the Bowie area re-creating a plane crash.  The production will involve a thick column of black smoke and pyrotechnics that will be able to be seen and heard by the public.  The production is scheduled to last for 3-days.

Production is set to start on Wednesday, July 13 with an end date of Friday, July 15.  Filming and special effects will occur between the hours of 10:00 am and 6:00 pm.

As a precaution and to ensure all permits issued by the Fire/EMS Department are followed officials from the Department’s Office of the Fire Marshal as well as a fully staffed piece of fire apparatus will be on location throughout the production.  We have alerted all of our public safety partners including the Maryland State Police, Prince George’s County Police, Bowie Police and the County Public Safety Communication, which handles 911 calls of these events.

Due to the hazards involved during this 3-day production members of the general public will not be allowed inside the secured area.

Citizens, residents and visitors in the Bowie area may see smoke and hear explosions.  If you feel that a true emergency is occurring not related to this production you are advised to call 911.  We anticipate numerous 911 calls will be made with the best intentions.  Public safety members will work through the calls and dispatch units as appropriate.
Posted by PGFD at 9:33 AM No comments: Links to this post