Fire Investigators from the Prince George’s County Office of the Fire Marshal have been investigating a fire and death that occurred at 11317 Tippett Road Clinton, MD since Saturday, December 5, 2015 at 5:05:00 AM.

Public Safety Communications received a 911 call from a resident at 11317 Tippett Road Clinton, Maryland. The resident reported that a trailer was on fire in her yard and someone was possibly trapped inside.

Firefighters and paramedics responded and arrived to report a fire fully involving a camping trailer fire. Fire suppression units extinguished the trailer fire and located a deceased person inside.

The Office of the Chief Medical Examiner – State of Maryland, concluded the cause of death was from the fire and smoke.

The deceased has been identified as Joel David Polhemus, DOB 6/8/1971, of Clinton.

The fire loss is estimated at $30,000. The exact cause of the fire remains under investigation however accidental causes are being considered.

This is the third residential fire fatality occurring in Prince George’s County this calendar year.  The other two incidents are:

Prince George’s County Firefighters battled three home fires on Tuesday evening.  Fortunately, no one was injured, however, each home suffered some damage.

The first fire occurred just before 4:30 pm in the 3900 block of Billings Place in Suitland.  Firefighters arrived at the 2-story single family home with fire coming from the windows on the side of the house.  Firefighters had the fire extinguished within 10 minutes of arrival.  The fire appears to have started in the kitchen on the first floor with some extension to the second floor.  The cause of the fire is undetermined.  Fire loss is estimated at $150,000.  Tragically, the family dog perished in the fire.

While firefighters were still committed to the fire on Billings Place another house fire was dispatched at around 5:50 pm in the 1100 block of Balboa Avenue in Capitol Heights.  Firefighters filling in at empty stations from the Billings Place fire were dispatched and among the first arriving units.  Firefighters quickly extinguished a fire that appears to have started in a utility closet.  The cause of this fire is undetermined with fire loss estimated at $10,000.

The third house fire of the evening occurred at about 10:15 pm at an Oxon Hill home in the 7500 block of Abbington Drive.  Firefighters arrived to find a small fire in the living room of a house.  The fire of undetermined origin was quickly extinguished.  Fire loss is estimated at $5,000.

Posted by PGFD at 8:49 AM No comments: Links to this post

To put this event into perspective we need to provide some background on how these families met at Childrens National Medical Center.  As previously reported:

“A horrific and tragic incident occurred on the evening of Sunday, November 8, 2015.  A crash on Chillum Road had initially claimed the lives of 4 people including 1 child.  14 others were transported to area hospitals some in critical condition.  This mass casualty incident was one of the worst the Department has experienced in recent memory considering the number of patients (18), fatalities (4) and the severity of injuries (8 in critical-life threatening).”  Since the crash another child succumbed to his injuries and an pregnant female lost her unborn child.

On December 21, volunteer and career members of the Hyattsville Volunteer Fire Department and the Prince George’s County Fire/EMS Department hosted a reunion between members of a family that were involved in the incident and a family they met while staying at Children’s National Medical Center. Carrie Jenkins was in the hospital with her son, Brayden, when they had the opportunity to meet one of the children that was involved in the Chillum Road crash. Little Dianna made such an impression on Mrs. Jenkins that when she returned to her home in Virginia she decided to enlist the help of her friends and family for donations. Mrs. Jenkins then contacted reporter Jeannette Reyes of WJLA News 7/News Channel 8.  Reyes worked with Dave Iannone, Hayttsville Volunteer President, and Fourth Battalion Commander Michael Glaubitz to arrange and coordinate a meeting between the two families.

At the Hyattsville Fire/EMS Station 801 that reunion occurred on December 21. There were dozens of presents that The Jenkins Family had purchased from their collected donations.  Jenkins and her two sons, Luke and Carter, were able to share these gifts with Little Dianna, her brother Junior and their father, Fredy.

The volunteer and career firefighters and paramedics from the Hyattsville Station were on hand to host the event along with Stations 834 Chillum –Adelphi, Station 844 Chillum, Station 855 Bunker Hill, Santa and Battalion Chief 884.  Some of the Firefighter/Medics attending the reunion were working the night of the tragic crash. 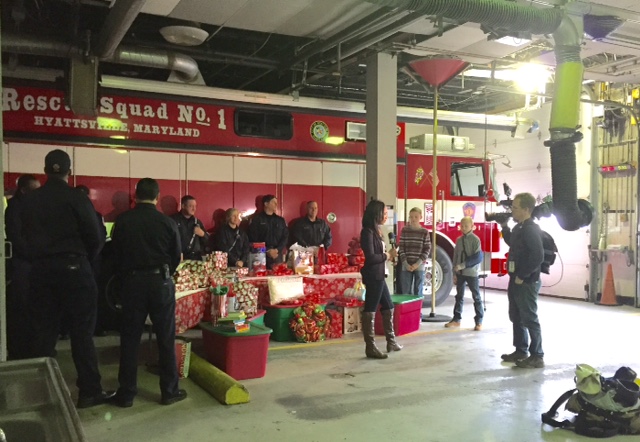 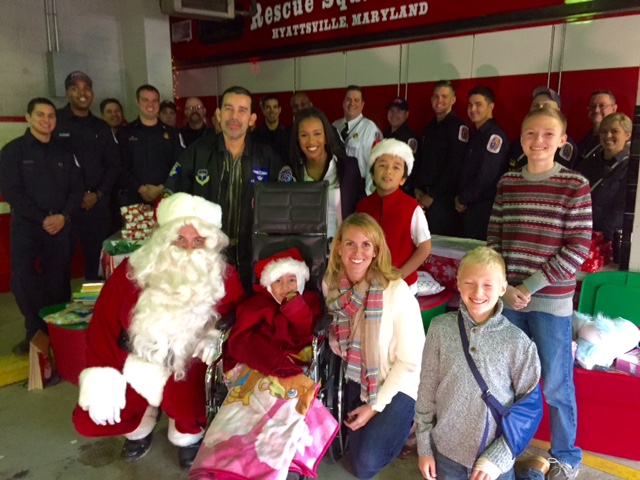 Posted by PGFD at 8:11 AM No comments: Links to this post

Prince George’s County Firefighter/Medics assigned to the Landover Hills Fire/EMS Station were surprised to find a hand-written note pinned to the stations information board a few weeks ago.  The anonymous note identified a family living nearby requesting a gift for the family’s daughter.

The Firefighter/Medics discussed the request and decided to do whatever they could to make this Christmas wish a reality.  Each and every person assigned to the station contributed his or her own money to purchase Christmas gifts for the 9-year-old girl.

The note had listed the mothers name and cell phone number.  The mom was contacted and personnel obtained several gift ideas for the girl.  There were enough funds donated to purchase a Nintendo DS Lite and games, a doll, jacket and some drawing items.  The items were dropped off at their home to be opened on Christmas Morning.

In this case Santa was not wearing red, Santa wore a blue work uniform and a Prince George’s County Fire/EMS Department patch on the shoulder.

Posted by PGFD at 7:45 AM No comments: Links to this post