The Prince George's County Maryland Fire/Emergency Medical Services (EMS) Department, along with other Departments and fire service organizations across the Country, has been speaking of the increased danger of burning candles. The fire service now has a famous Hollywood couple as advocates for candle safety. Fire safety and injury prevention educators often use the unfortunate incidents of others to help in the dissemination of safe and sound practices to keep everyone safe. To that end, we share the story of a fire caused by an unattended candle and subsequent injuries to one of the home occupants.

A fire in the home of Ozzy and Sharon Osbourne early Thursday morning, January 17, has left their Beverly Hills, California, home damaged and some injuries to Mr. Osbourne including minor burns and a setback to an existing hand injury.

According to Graham 'Gruhamed' Hartmann of Loudwire Magazine, “Firefighters were called to the Osbournes’ Beverly Hills home at around 4:45 am, Thursday, January 17, to extinguish a fire caused by a candle which had not been blown out before the husband and wife retired to bed. The candle was housed in a glass vase that reportedly exploded, causing a small fire in the Osbourne’s living room. Sharon and Ozzy, who had undergone hand surgery the day before, attempted to put out the flames, but their efforts resulted in minor injuries to the Black Sabbath vocalist.”

Hartman continued, “Ozzy attempted to put out the fire with his hand still in the cast from his surgery as Sharon got some water and unintentionally caused the oily fire to spread as she splashed the flames. The resulting blast of fire burned Ozzy’s long hair up to his ears, seared off his eyebrows and left his cheeks skinned. Luckily, Sharon and the Osbourne’s many pets suffered no injuries.”

Sharon described the incident with intricate detail on her show ‘The Talk’ Thursday, January 17, [via Contact Music]:

At five o’ clock (in the morning), I heard a noise like metal had fallen. I thought it was my housekeeper coming in and she had dropped her keys on the tiles, that’s what it sounded like, so I didn’t pay any attention. A few minutes later, my eyes are stinging and my throat’s closing up, (I thought), ‘Something’s weird smelling in here’.

Then my dog started to bark. I go downstairs and the whole living room (was on fire). The candle had burst and the cracking sound was the glass and the candle exploding…

My husband had an operation on his hand yesterday so he’s in a complete cast… He comes down and goes, ‘Oh, the fire, the fire!’ (and tries to put it out) with his hand in the cast. Then he opens the French doors and I go into the kitchen and throw water on it and it erupted…

Ozzy’s front of his hair from (his ear down is), gone! His eyebrows (are gone)… he’s got like, skinned cheeks. We are, like, two idiots, it was like The Three Stooges… Everything you are not meant to do – go to bed with candles alight, open the doors and put water on – we did it all.

They (the firemen) come up, they give us a lecture, and Ozzy’s like, ‘She’s been doing this to me for 32 years! You tell her, you tell her, no more candles!’

I apologize to my husband because he put himself out. He made his hand worse, it started to bleed, the whole nine yards, and I’m sorry and I love you and I will never light a candle again…

I want to thank the firemen from Beverly Hills Fire Station because you are magnificent there and I want to say to everyone out there, please, please check your candles before you go to bed.

The American Fire Service wholeheartedly supports and agrees with Sharon Osbourne, ensure every candle is extinguished and never leave a burning candle unattended We would like to add that everyone should consider the use of battery operated flameless candles.

Congratulations on a job well-done to the Fire Department - City of Beverly Hills, California, for educating the occupants about candles after the fire was quickly extinguished.

The fire service has seen an increase in home fires over the past dozen years with the popularity and increased use of candles. The peak increase in incidents is seen during the holiday season when candles play an important role in religious celebrations and home use is at an all time high. Several University of Maryland students were displaced from their off-campus apartment in December after an unattended religious candle display ignited a larger fire. December is the peak time of year for home candle fires. In December, across the country, 13% of home candle fires begin with decorations compared to 4% the rest of the year.

• On average, 42 home candle fires are reported every day.

• More than half of all candle fires start when something that could burn, such as furniture, mattresses or bedding, curtains, or decorations is too close to the candle.

• In one-fifth (20%) of candle fires, the candles are unattended or abandoned.

• Over one-third (36%) of home candle fires begin in the bedroom.

• Falling asleep is a factor in 12% of home candle fires and 36% of the associated deaths.

• One-half of home candle fire deaths occur between Midnight and 6 am.

• Young children and older adults have the highest death risk from candle fires.

• The risk of fatal candle fires appears higher when candles are used for light.

• If you do use candles, ensure they are in sturdy metal, glass or ceramic holders and placed where they cannot be easily knocked down.

• Extinguish candles after use and before going to bed.

• Keep candles at least 12 inches from anything that can burn.

• Keep candles out of the reach of children and pets.

• Children should never be allowed to play with matches, lighters or candles.

• Never use a candle where medical oxygen is being used. The two can combine to create a large, unexpected fire.

• Always use a flashlight – not a candle – for emergency lighting.

• When using in home worship, don't place lit candles in windows, where blinds and curtains can close over them, or pass handheld candles from one person to another. To lower the risk of fire, candles should be used by only a few designated adults.

In the event of a fire, remember time is the biggest enemy and every second counts!

Escape first, and then call for help. Develop a home fire escape plan and practice it frequently with your family. Designate a meeting place outside. Make sure everyone in the family knows two ways to escape from every room.

Never stand up in a fire, always crawl low under the smoke, and try to keep your mouth covered. Never return to a burning building for any reason: it may cost you your life.

Everyone needs to have working smoke alarms installed on every level of your home, test alarms and detectors on the first day of every month and keep them clean and equipped with fresh batteries at all times. Know when and how to call for help. Remember to practice your home escape plan.

The Prince George's County Safety First Program will provide County residents with a working smoke alarm and install it for you, free of charge. Simply call our Safety First Smoke Alarm Program at 301-864-SAFE (7233).

Posted by PGFD at 11:57 AM No comments: Links to this post 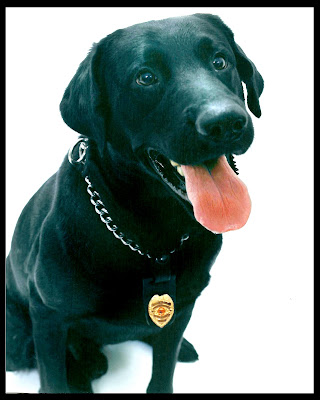 A recently retired Prince George's County Fire/EMS Department explosive detection canine has passed away after a yearlong battle with cancer.  "Thunder" served alongside his handler and partner, Fire Captain Dale Ednock, from 2003 until his retirement in September 2012.  Thunder passed away on Friday, January 11, 2013. As is the case with most public safety canines, Thunder worked alongside Captain Ednock and went home with him as a loving and loyal pet to Dale and his family.

Captain Ednock, Bomb Squad Commander, stated, "Thunder's passing has left a tremendous emptiness in my family’s home and hearts. He will be missed."

Fire Chief Marc S. Bashoor stated, "Thunder served Prince George's County diligently for 9 years.  His service to members of the Fire/EMS Department and Prince George's County as a whole was and still is appreciated.  I understand the special relationship of Thunder with Dale and his family, Thunder was a beloved family pet in addition to being a loyal and dedicated partner that came to work and went home with Captain Ednock.  My condolences to Dale and his family"

Posted by PGFD at 10:56 AM No comments: Links to this post