Prince George’s County Firefighter/Medics provided immense relief and joy to a Fort Washington family this afternoon.  At around 4:45 pm a relatively small female corgi-collie mix was playing in a wooded area in the back yard of the family home in the 12900 block of Canoe Court in Fort Washington.  The dog was sniffing a large oak tree that had been uprooted and lying on the ground when the dog suddenly disappeared into a hole near the base of the tree.  The family tried unsuccessfully to reach the 5- year-old dog as she had fallen under the large root ball and into a 3-foot hole making her unreachable.  The dog, “Reyna,” being rather slight in stature was not able to exit by herself and began to bark and cry.   Fearing the worst and helpless the family could only think to call the Fire/EMS Department.

The crew from the Fort Washington Fire/EMS Station 847 is the closest station to the Canoe Court address.  This particular station is a satellite site for the Department’s Technical Rescue Team that has personnel trained, among other specialty rescues, in trench and confined space rescues.  The Heavy Duty Rescue Squad drove to the scene with Fire Lieutenant Brent Lockwood and Fire Fighters Joseph Quade, Thomas Joachim and Dino Dangelo on board.  The firefighters arrived and evaluated the situation.  A decision was made to move forward with a rescue attempt rather then take no action and risk an untrained family member or other good intentioned citizen attempting a rescue and possibly becoming a victim.

Typically our services are intended to save human lives, however, by effecting rescues of pets from these type of situations will negate the need for us to return later and rescue someone that was trying to save the pet.  It is best for firefighters to use their training, skills and tools to rescue a pet in distress; in essence, to save well intentioned others from getting injured themselves while attempting a rescue.  Additionally, firefighters have compassion for animals, especially when they are in distress, as well as for the pet owners.

The firefighters started to work just after 5:00 pm by cutting away a large portion of the root ball and excavating the area around where the dog was trapped in the hole while mom and children watched anxiously.  Once the roots were removed, firefighters dug away enough dirt to allow safe access to the dog.  Reyna was removed from the hole, uninjured and reunited with family members at about 6:00 pm.

The grateful dog owner, Sally Singh, could not have been more gracious in thanking the firefighters for saving her pet.  “The firefighters were great and very professional in working to save my dogs life, I can’t thank them enough,” stated Sally Singh. 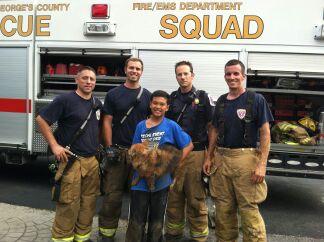 Posted by PGFD at 7:35 PM No comments: Links to this post