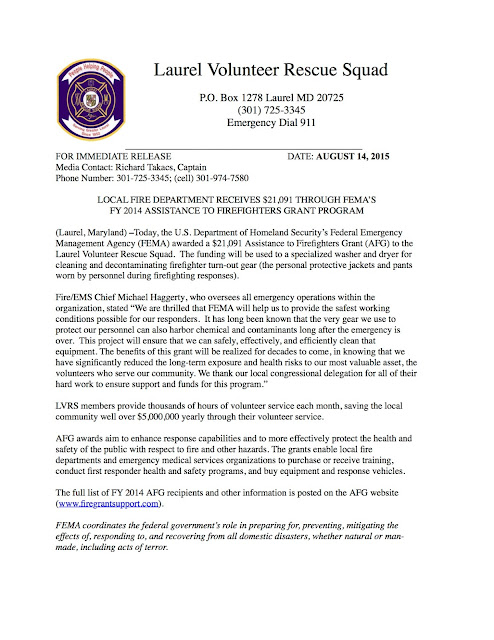 Posted by PGFD at 4:27 PM No comments: Links to this post

It's one of those calls that many members of the Fire/EMS Department will never forget.

At a recent National Fallen Firefighters Foundation (NFFF) Survivors program held in Annapolis, MD, a yoga trainer was contracted to demonstrate relaxation techniques.  Upon hearing that NFFF Executive Director Ron Siarnicki was the former Fire Chief in Prince George’s County the yoga instructor told him that she was once involved in an accident where two of her high school friends were killed, she survived.

The crash involved a dump truck with a load of hot asphalt.  Siarnicki knew immediately of the crash she was referring to.  The crash occurred in November of 1986 at the intersection of Good Luck Road and Kenilworth Avenue.  She relayed to Ron that she always wanted to reach out to the firefighters and paramedics that helper her that day but never knew how.

Lisa Beavers Hegewisch will be provided the opportunity she has thought about for nearly 29 years.  The NFFF and the Prince George’s County Fire/EMS Department have reached out to contact as many personnel as possible that operated on the scene that day.

Attending will be a rookie firefighter in 1986 that witnessed the crash and was the first firefighter on the scene, a paramedic that treated and transported her to the Trauma Center and firefighters that were on the scene.

WHAT:       Reunion of patient and Firefighter/Medics nearly 29 years after the crash

WHO:         Lisa Beavers Hegewisch,
NFFF Executive Director Ron Siarnicki,
Fire/Chief Marc Bashoor,
Firefighter/Medics that worked the scene and treated Lisa.
Posted by PGFD at 9:18 AM No comments: Links to this post