Firefighters Save a Dog to Prevent Citizen Injuries 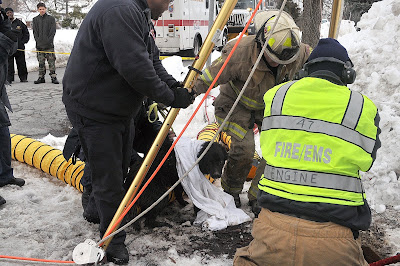 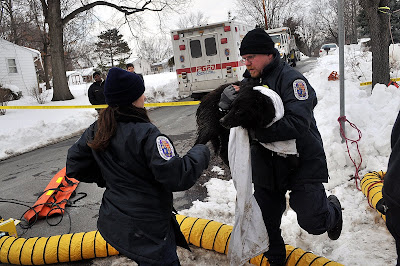 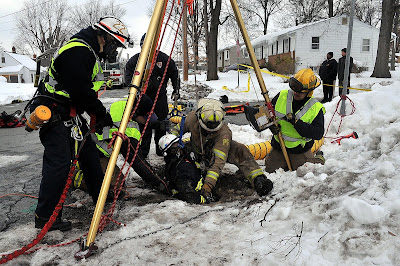 A Laurel resident contacted the Prince George’s County Fire/Emergency Medical Services (EMS) Department to seek assistance for a dog that had fallen into a storm drain. At about 1:45 PM, Tuesday, February 16, 2010, firefighters and medics from the Laurel area and the Department’s Technical Rescue Team arrived at the intersection of Clarke Avenue and Holly Street in Laurel. Apparently, a snowplow had inadvertently shifted the manhole cover off of the storm drain and unknowingly left a 20-25 foot storm drain exposed. The Laurel resident that called 911 had almost fallen into the opening himself and was in the process of finding something to cover it up when he heard the dog crying.

Once the Fire/EMS Department arrived a decision was made to move forward with a rescue attempt using members of the Technical Rescue Team trained in confined space rescues. The decision was based on the safety of the members of the community that were poised to enter the storm drain to rescue the dog themselves. There are inherent dangers with such a rescue attempt including poor to little air quality at the bottom of the well. In order to prevent injuries to the community the firefighters had to save the dog the right and safe way.

Using all safety precautions and moving at a very deliberate speed to remain safe, firefighters tested and constantly monitored the air quality in the storm drain and pumped in fresh air. A confined space rescuer donned his personal protective equipment and exercised all precautions while effecting the rescue. The teamwork of the Technical Rescue Team, including personnel from the Tuxedo-Cheverly and Fort Washington Fire/EMS Stations, worked meticulously in setting up a rope and pulley system and when ready, lowered the firefighter into the hole by way of a tripod.

Fire Fighter Joe Ford made his way into the small entrance of the storm drain and soon made contact with the dog that he stated, “Had an extremely friendly disposition.” The dog allowed Fire Fighter Ford to place a rescue harness and a blanket around him before being hoisted up by other members of the rescue team. Once the dog was safely on the ground, Fire Fighter Ford was then hoisted out. The entire rescue effort was very efficient taking about 10 minutes once the firefighter had entered the storm drain.

The dog, a male chow-lab mix, with long black hair weighs about 40 pounds and has long black hair. The dog, wet and cold, had a choke chain but no identifying tags and had no obvious injuries. Animal Control Officers took possession of the dog and took him to their facility for evaluation. Anyone with information about the dog’s owner is encouraged to contact the Animal Control Facility at 301-780-7200.
Statter911.com coverage of story

Posted by PGFD at 6:39 PM No comments: Links to this post