Prince George's County, Maryland, will be host to the 41st International Association of Fire Fighters (IAFF) Local 1619 Muscular Dystrophy Association (MDA) Softball World Series.  The annual IAFF Softball Tournament, September 4th - 7th, 2014, will be fun for all with IAFF teams from the around the Country vying to be the IAFF World Series Champions.

With a primary focus remaining on the "kids" and raising funds to help find a cure for MD the format of the Softball Tournament is now the IAFF Softball World Series.

We look forward to teams from all over the Country joining us again for the good times and competitive softball.

For additional information, registration form and information on a T-shirt design contest please visit the Facebook Page by clicking here. 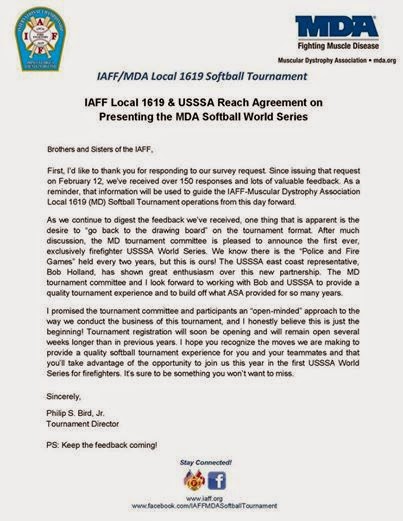 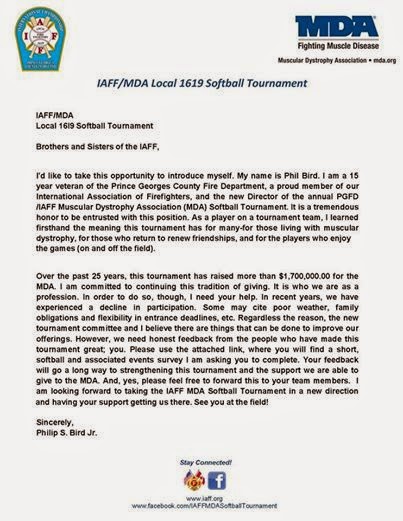 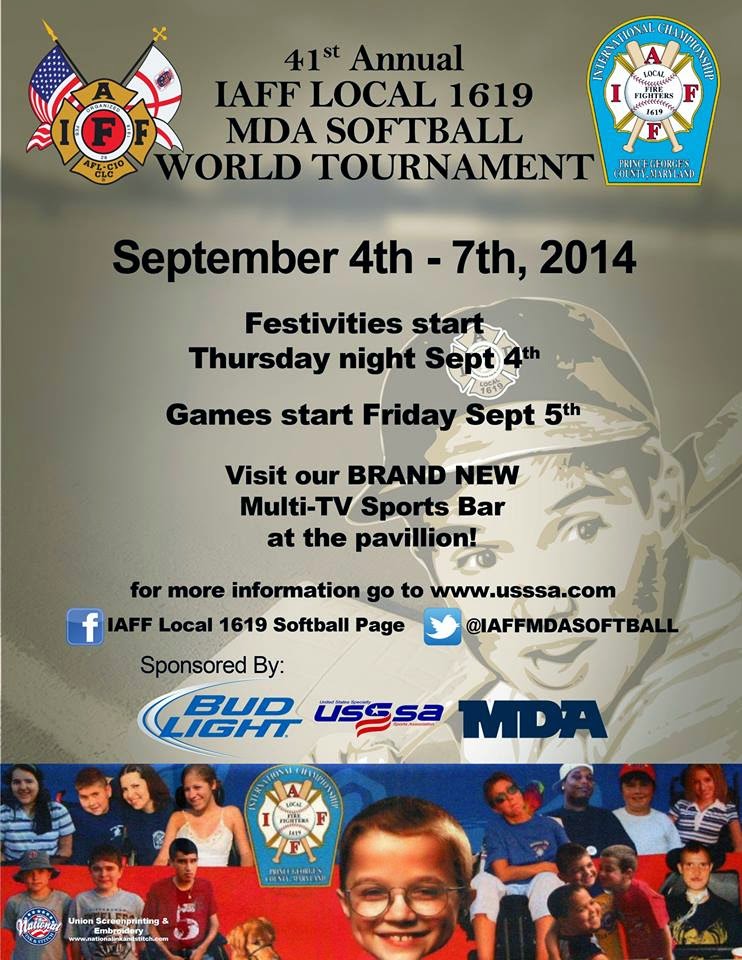 Posted by PGFD at 4:39 PM No comments: Links to this post

MEDIA CONTACT: Mark E. Brady, Chief Spokesperson, 240-508-7930
mebrady@co.pg.md.us     @PGFDPIO
For citizens and residents of Prince George's County the purchase and use of backyard fireworks for the upcoming Fourth of July celebrations may be confusing.  It is OK to purchase a Christmas Tree in another jurisdiction and bring home to the County.  The same applies for roadside purchases of flowers, fruit, artwork, etc.  As County residents travel around the region they will see roadside and parking lot booths set up promoting the sale and use of fireworks in neighboring jurisdictions.  Stores sell fireworks also.  You may ask whats up??

Prince George's County is one of three jurisdictions in Maryland that prohibit all consumer fireworks.  This law is designed to protect you and those around you.

Consumer purchased backyard fireworks can cause injuries and damage from fires.  Please enjoy your fireworks at one of the many public displays.

Penalties for violation of this law carries up to $1,000 in fines and 6 months in jail.  Enjoy Fourth of July safely and legally, attend a public or municipal display.

To demonstrate the power of a seemingly innocent fire cracker I encourage you to watch this video.  A small firecracker is inserted into a melon.  Imagine you are holding this same firecracker in your hand when it explodes!!!

Don't try this at home.  These displays were conducted by members of the Fire/EMS Department Bomb Squad under strict safety guidelines!!!


Over the past several years, during the July 4th week, there has not been any significant injury or property damage in Prince George's County from fireworks.  Our fireworks law is a law we can live with!!!  If you have purchased your own backyard fireworks and were not aware of the County Law, call 301-583-2200 and request a Fire Investigator to come by your residence to confiscate them.  You will not be charged with a crime if you use this method of surrendering fireworks.
Posted by PGFD at 9:34 AM No comments: Links to this post