Friday and into Saturday morning proved to be a busy day for Prince George’s County Firefighters battling five structure fires in addition to our daily workload of about 350 fire and emergency medical incidents.  Furthermore, a 2:00 pm press conference was held announcing a High School Fire/EMS Cadet Pilot Program.
Around 8:00 am, a fire in the kitchen of a College Park home in the 3900 block of Metzerott Road caused $3,000 in fire loss.  No injuries. The cause of the fire is under investigation. 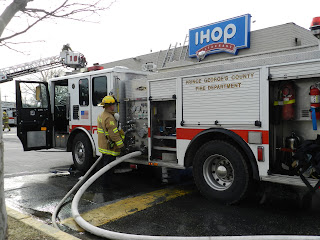 At about 10:15 am, workers replacing the roof of the IHOP Restaurant in the 15000 block of Baltimore Avenue in Laurel may have ignited a fire in the roof/ceiling area of the 1-story restaurant.  Everyone; patrons, staff and roof workers eventually evacuated safely.  Fire loss is estimated at $5,000. 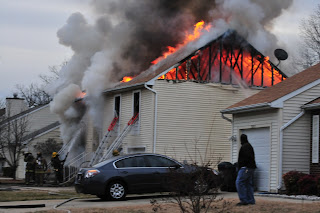 Just after 4:00 pm firefighters responded to a house fire in the 7200 block of Mount Forest Terrace and arrived to find heavy fire conditions on both floors and through the roof of this single family home.  One firefighter sustained minor burn injuries.  Fire loss is estimated at $150,000 and the cause is under investigation.
At about 7:15 pm a malfunctioning fireplace is being blamed for a townhouse fire in Upper Marlboro.  Firefighters battled a fire on the second floor and roof of a 2-story, end of the row, townhouse in the 4700 block of Colonel Ashton Place.  Fire loss is estimated at $85,000.  One firefighter was injured while fighting the fire sustaining a laceration to his hand.  He was treated and released from an area hospital.  The family was displaced and assisted by the Citizen Services Unit.
Firefighters responded to a house fire around 12:30 am, Saturday, in Accokeek.  Fire/EMS units arrived to find a 2-story brick single family home with a well-advanced fire.  Heavy fire consumed all floors and burned through the roof.  Fortunately, firefighters were ordered by the Safety Officer and the Services Commander, Lt. Col. Ben Barksdale, to remain outside and not to enter the structure that was already a total loss.  As a result there were no injuries.  The family received assistance from the Citizen Services Unit.  The cause of the fire is under investigation and fire loss is estimated at $250,000.
We are fortunate that the winter mix of snow and ice occurred on a Saturday.  A few motor vehicle crashes have occurred, mostly on high-speed limited access highways (I-95, Route 495, B/W Parkway, Branch Avenue).  No serious injuries have been reported and our overall activity has been slower than normal.  If you don’t need to go out, stay at home until the hazardous conditions have passed.  Stay Informed, Stay Ready, Stay Safe – Remember, Safety First Ensures Everyone Goes Home.
Posted by PGFD at 9:40 AM No comments: Links to this post