Prior to coming to Gallaudet, Coach Elie has coached numerous positions, most recently serving as the defensive line coach for seven years at James H. Blake High School in Silver Spring, Md. Coach Elie was the Defensive Coordinator for the D.C. Generals Police and Firefighters team prior to joining the Bison where he has served for four years.

Coach Elie is a highly decorated firefighter/paramedic in Prince Georges County, Md., where he has served for the past 29 years and is a Captain.

Coach Elie and his wife have three children, Chris, Kyle and Hannah, who reside in Burtonsville, Md.


Posted by PGFD at 5:02 PM No comments: Links to this post

Posted by PGFD at 10:32 AM No comments: Links to this post

Firefighters Conduct Drill "Thinking Outside of the (Sand) Box"

Firefighters practice their skills every day.  They conduct drills to the point where they can’t get it wrong.  Firefighters can’t afford to do their job wrong because it could mean someone is going to get hurt or even worse, die.

Day in – day out from one shift to another, firefighters are constantly testing their mental capacity and thought process under pressure by refreshing their memory of general orders and standard operating procedures, memorizing first due maps and running routes and reviewing pre-plans of buildings in their area.

They push their physical limits by running great lengths and testing stamina and strength by hitting the gym, working out, lifting weights and more.

There are always the fire department standards such as throwing and climbing ladders, using only your sense of touch in blacked-out conditions, pulling and running hose lines and flowing water.  They repeat the drills over and over and over so they can never get it wrong.  They know their physical and mental well-being could be the difference between life and death.

Some station officers can be creative and come up exercises and drills to accomplish their objectives in unusual ways.  No one ever said that drilling and exercising could not be fun.  So it was on Veterans Day Monday, November 11, 2013.  The firefighters from the Kettering-Largo Fire/Emergency Medical Services Station 846 went about their drill of the day in a very effective yet “thinking outside of the box” manner.  C Shift personnel drove their fire engine to a nearby playground.  The crew of three used a sturdy and durable piece of playground equipment that offers a challenging course for a firefighter with his vision removed by tape placed over his face piece and wearing full personal protective equipment including self contained breathing apparatus.  The equipment became their outdoor maze with firefighters having to follow a charged hose line to reach their exit.

"The Maze" is a popular drill and is used to simulate being inside of a burning structure and using your sense of "touch" to make your way out.  The playground equipment proved to be challenging as firefighters negotiated many obstacles including steps, fall hazards and tight spaces.

You may remember Fire Fighter “Butch” Raburn.  He was Captain of the Team PGFD Flugtag Team.  A true ships Captain, he went down with the ship.

Congratulations to the crew for being innovative and using available resources to create a challenging exercise.

All of the images are from the Facebook page of Fire Fighter Raburn and are OK to use. 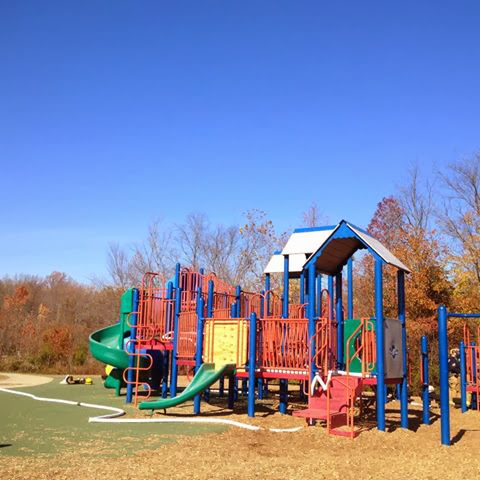 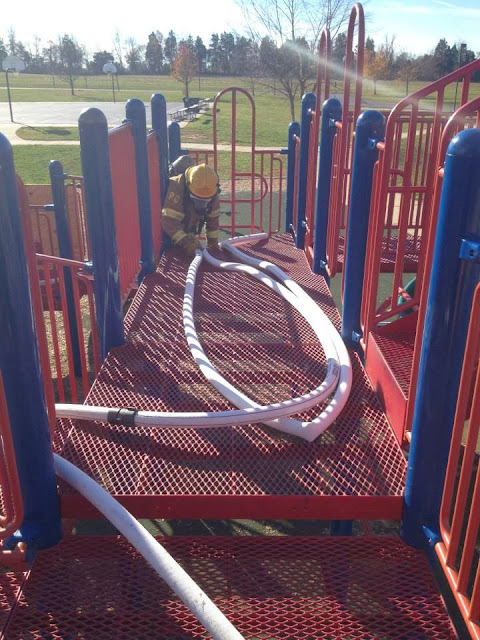 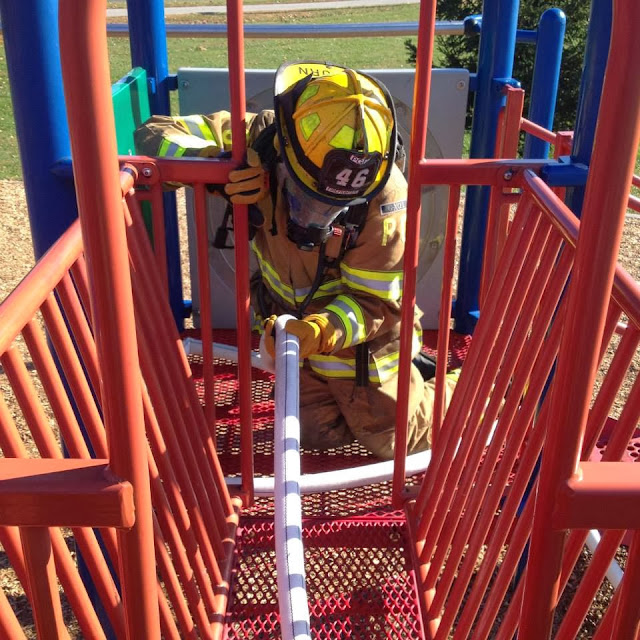 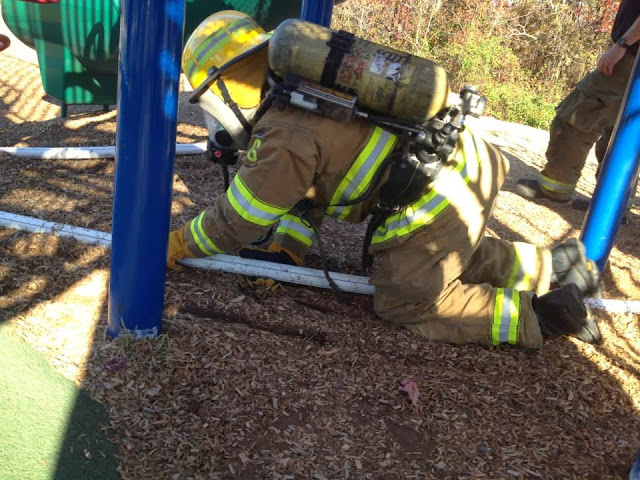 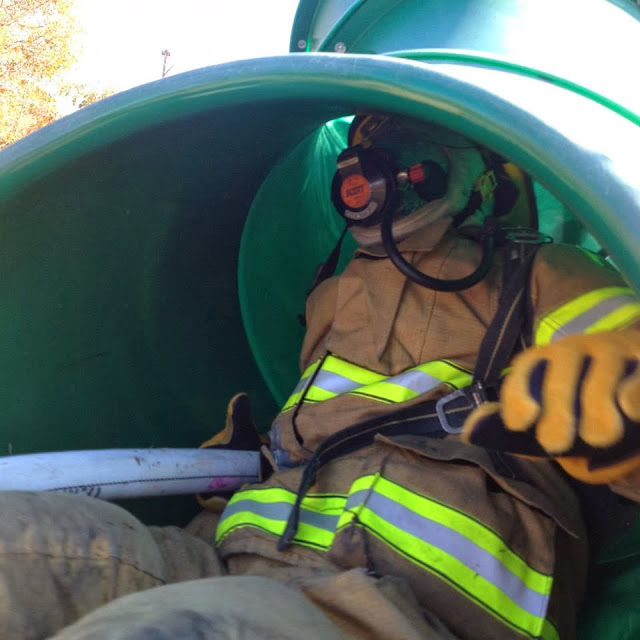 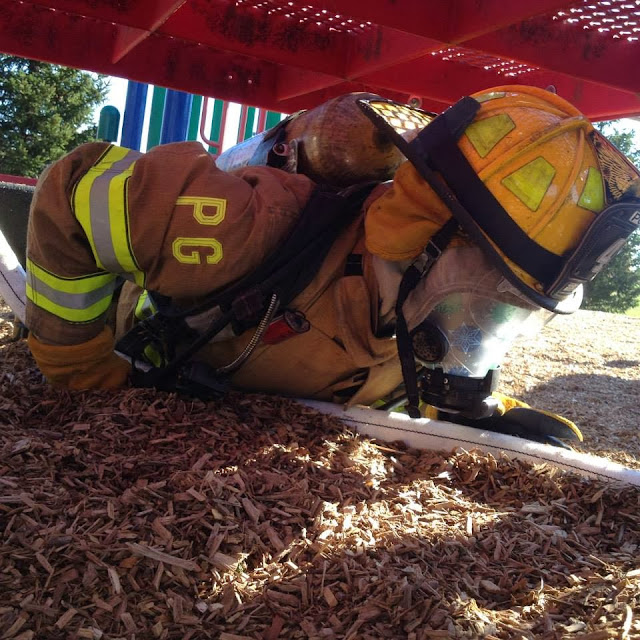 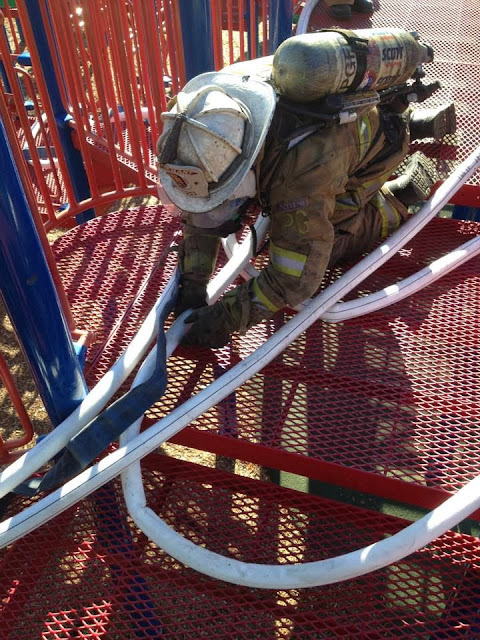 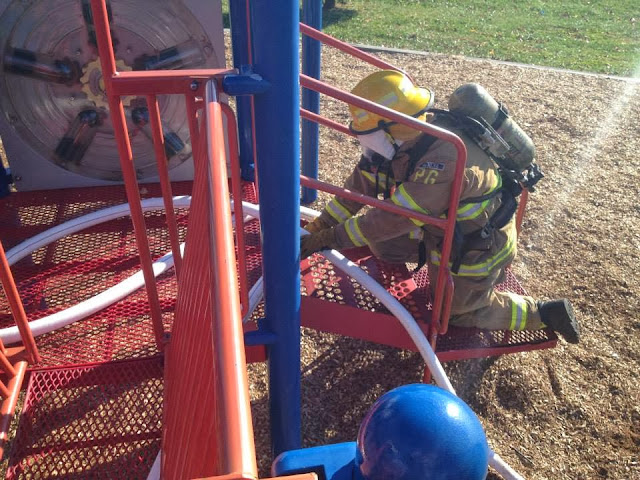 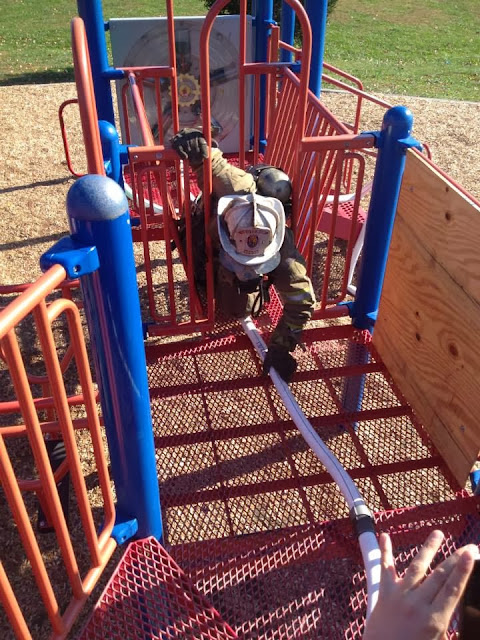 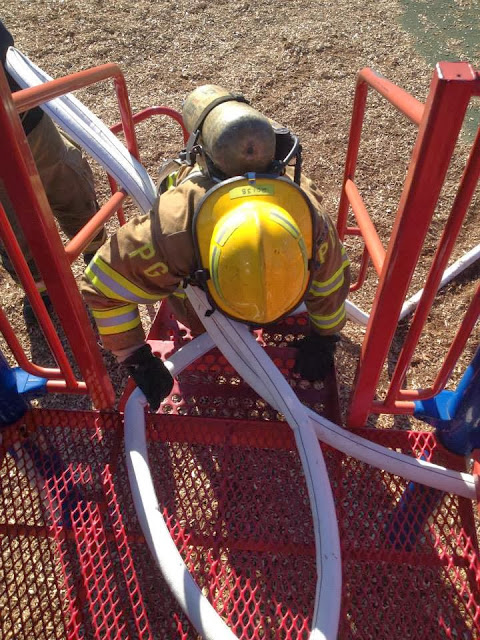 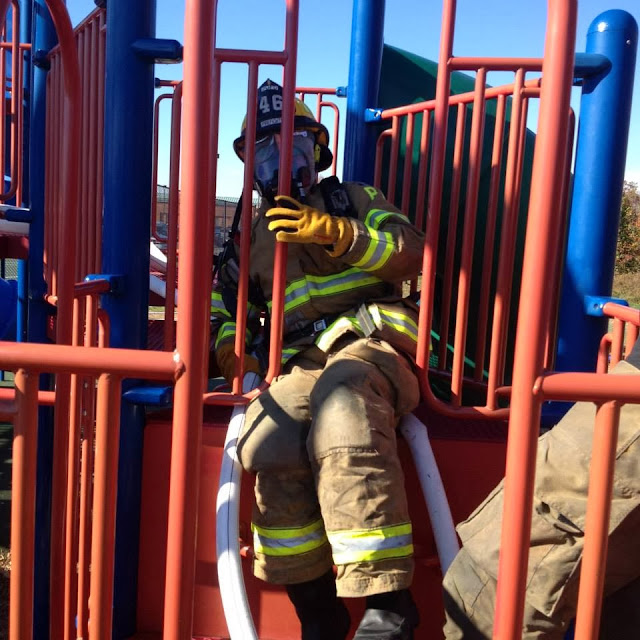 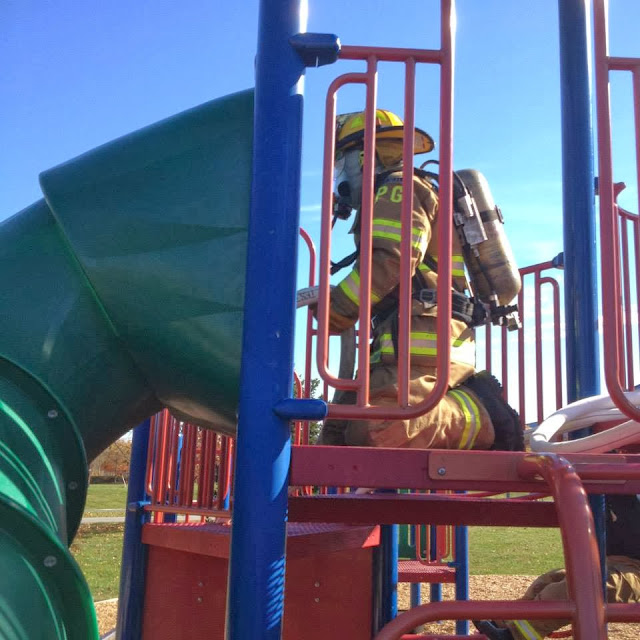 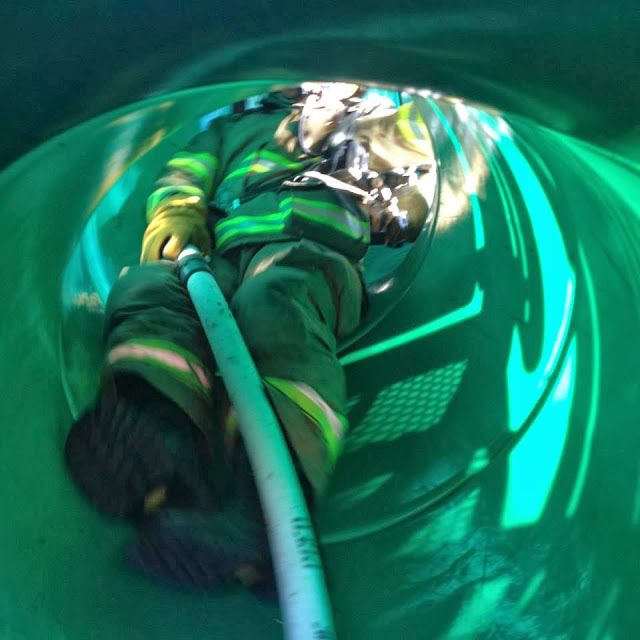 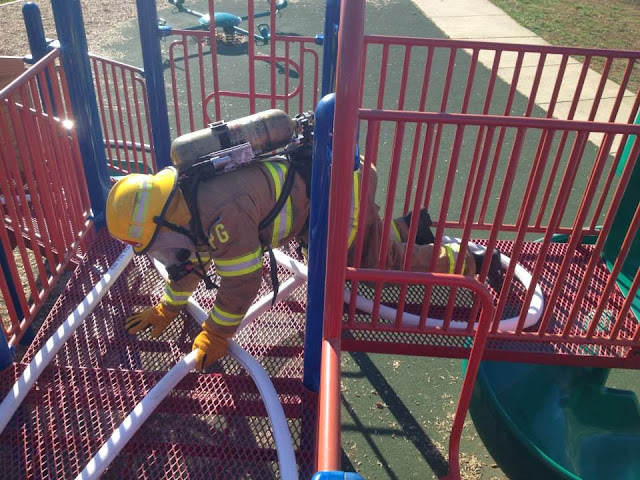 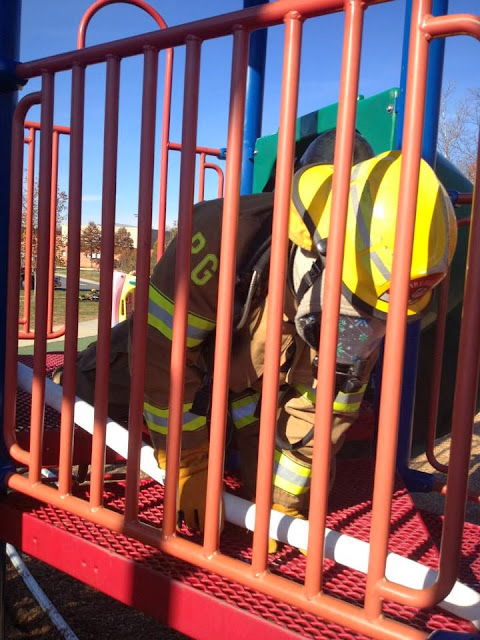 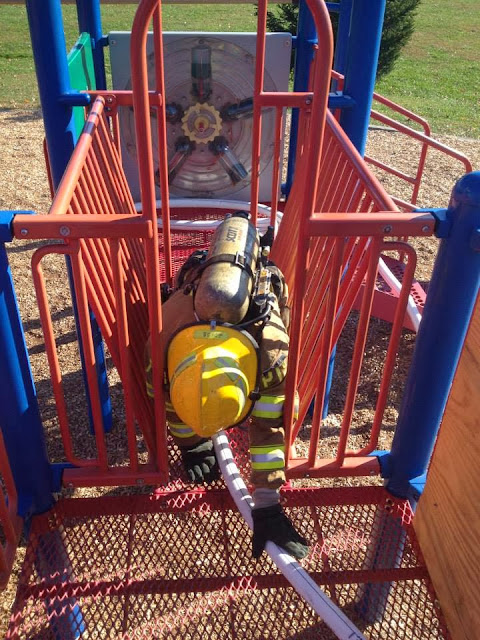 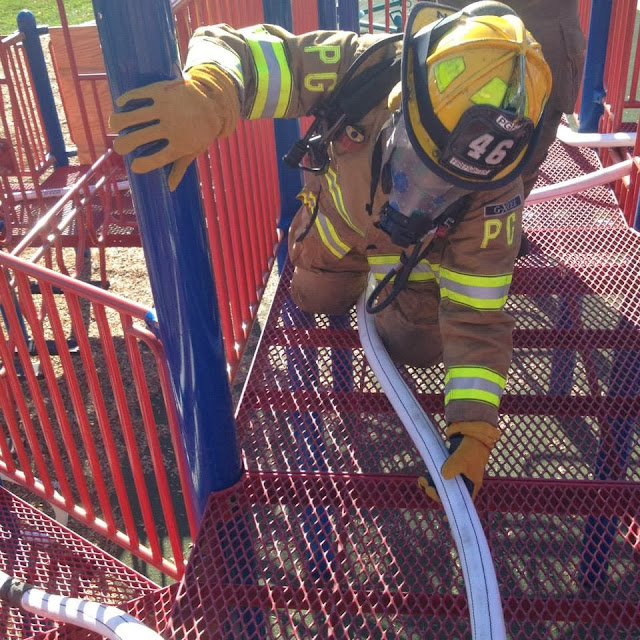 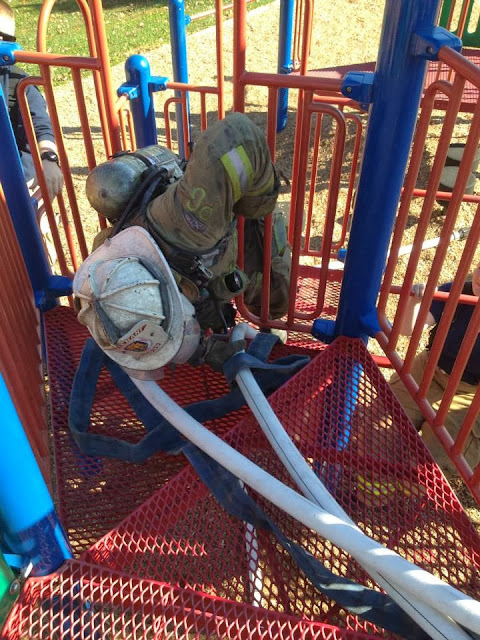 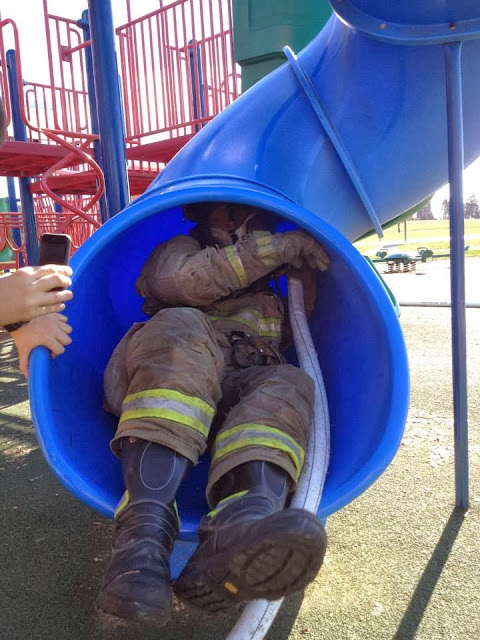 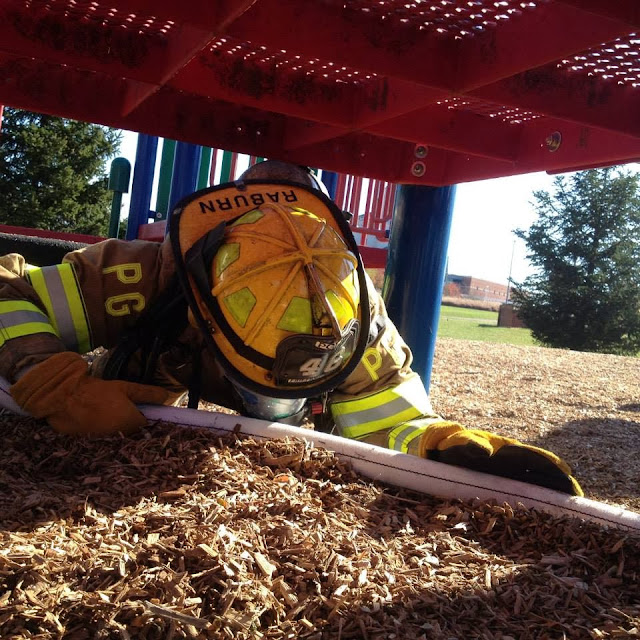 Posted by PGFD at 10:11 AM No comments: Links to this post