Today, a Seat Pleasant Volunteer EMT received an award from the Prince George's County Fire/EMS Department for saving the life of a longtime friend and fellow volunteer who is also a County Police Officer.  Additionally, the Prince George’s County Police Department extended its most sincere thanks to Seat Pleasant Volunteer EMT Phil Martin for his quick and heroic action in helping to get emergency help to one of their officers.


The County Police explained the scenario as in the early morning hours of March 3rd, Police Officer First Class Ricardo Biddy who is also a Seat Pleasant Volunteer EMT was leaving his firehouse after his shift in his Prince George’s County police cruiser.  As Biddy pulled up in front of his home which was 15 minutes away, he was on the phone with Seat Pleasant volunteer EMT Phil Martin.  While idling inside his cruiser while parked in front of his home, Officer Biddy’s speech suddenly became slurred and the call was disconnected.

EMT Martin, knowing something could be horribly wrong, immediately called public safety communications who dispatched Police and Fire/EMS.  Martin then jumped in his personal vehicle and traced Officer Biddy’s route home.   Once Martin located the cruiser, he found Biddy unresponsive inside.  Other emergency units soon arrived and rushed Biddy to the hospital where he got the help he needed.

It was determined that Biddy’s cruiser was leaking carbon monoxide into the car and the reason he was so sick and had passed out was due to CO poisoning from the car.


The Prince George’s County Police Department is confident that the carbon monoxide leak in Biddy’s car was an isolated to his cruiser alone.  There was repair work performed on the cruiser just a few months earlier at the dealership.  As part of an internal investigation, the department learned Biddy had taken his cruiser to county fleet maintenance in January and February after smelling what he thought were exhaust fumes inside his vehicle.  Testing on vehicle by the county, dealership, and hazmat officials found nothing wrong during those visits. After the medical incident, fleet maintenance workers recreated what Biddy had done on March 3rd and discovered carbon monoxide was leaking into the cabin.  The cruiser was sent back to the dealership which discovered there was a crack in the engine’s manifold.

"Your quick thinking and immediate action helped save the life of your friend and colleague and are commendable and worthy of recognition.  Therefore, you are hereby awarded a Fire/EMS Department Emergency Services Award.  Your actions reflect well on you personally and professionally and exemplify the excellent caliber of service we strive to provide at all times and in every circumstance."


Posted by PGFD at 3:38 PM No comments: Links to this post

The Prince George’s County Fire/EMS Department continues their innovative approach in assisting citizens with their healthcare needs. The program, titled Mobile Integrated Healthcare (MIH), focuses on linking our residents with available healthcare agencies throughout the county and region.  Through the utilization of community based paramedics and nurses, the program brings healthcare providers to a citizens home to assess and coordinate their health needs.  Based on the complexities of the current healthcare system, many citizens utilize the 911 system as their primary means of healthcare. This innovative approach ensures our citizens are connected with the best healthcare resources available in the region.

The MIH Team initially focuses on those citizens that have accessed the 911 system frequently.  Once identified, the team meets with patients in the comfort of their home to discuss and identify healthcare needs.  During these home visits, the patient is assessed for any acute medical problems, have their medical history and current medications reviewed, and the team will also perform a full home safety assessment.  This home safety assessment ensures that any potential hazard can be identified and corrected.  The overall goal of these home visits is to connect the citizens with services that meet their specific needs, whereas an ambulance transport to the emergency room may not always be the appropriate solution.

So it was that the MIH Team was visiting a patient at his apartment in Hyattsville when they noticed the mans bed and bedroom furniture were missing.  The man, in his 70’s, explained that the apartment complex management removed the bed due to an infestation of bed bugs.  The responsibility to replace the bed is that of the resident.   This patient suffers from multiple chronic conditions that caused him to be transported to the hospital over 20 times in 2016. Since the MIH Team has been working with him (approximately 90 days), he has made only one return trip to the hospital and his health is steadily improving.  The patient is a man of little means and spends most of his income on his medications.  Replacing the bed was not an viable option for him financially.

The patient had to sleep in his living room on a love seat and the MIH Team feared that this sleeping arrangement might have an adverse impact on his health.  Their fears were verified when the gentleman was soon transported to a hospital for medical treatment.

The MIH Team went above and beyond the call to duty and sought to rectify the problem on behalf of their patient.  They visited a nearby Bobs Discount Furniture Store in Hyattsville and explained the situation to the store manager.  Without hesitation the store agreed to donate a bed to the man, deliver and set it up.  Hopefully, with new sleeping arrangements the man can return to a more normal and healthy way of life.

The Prince George’s County Fire/EMS Department would like to acknowledge the generosity and willingness to help someone in need.  “As firefighters and medics we accept the responsibility to help people in need,” said Fire Chief Benjamin Barksdale.  “Bobs Discount Furniture has no such obligation but agreed to help, without hesitation or reservation, and resolve an adversity for a total stranger.”

Bobs Discount furniture was scheduled to deliver and set up a new bed today just in time for the patients return from the hospital.


Posted by PGFD at 3:04 PM No comments: Links to this post

Damage to Clinton Home Garage from Vehicle - No Injuries

A Clinton homeowner is fortunate not to have been injured; however, his attached garage sustained significant damage.  Just before 12:30 pm today, March 22, firefighter/medics were alerted to a vehicle that struck a house in the 7900 block of Godfrey Court in Clinton.

Upon arrival firefighters found a 2-story single family home with an attached garage.  There was an SUV that had driven partially through the back wall of the garage.  The driver, who is also the homeowner, was reportedly pulling into the garage when for unknown reasons to firefighters, suddenly accelerated and drove through the back wall.  Fortunately there was no damage to the home itself and no displacement is required.

The adult male driver was shaken but not injured and declined transportation to the hospital. 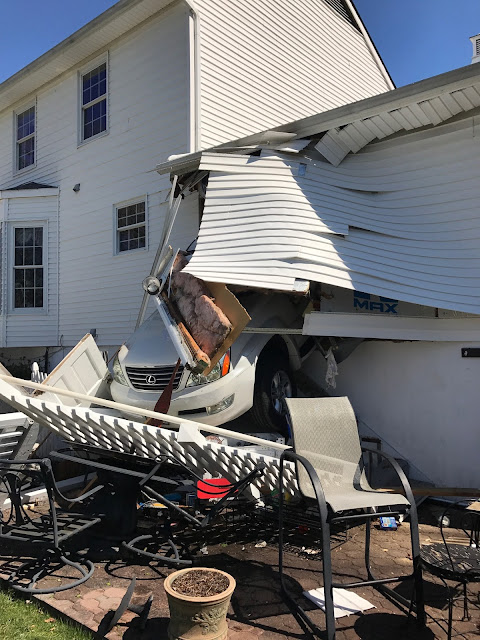 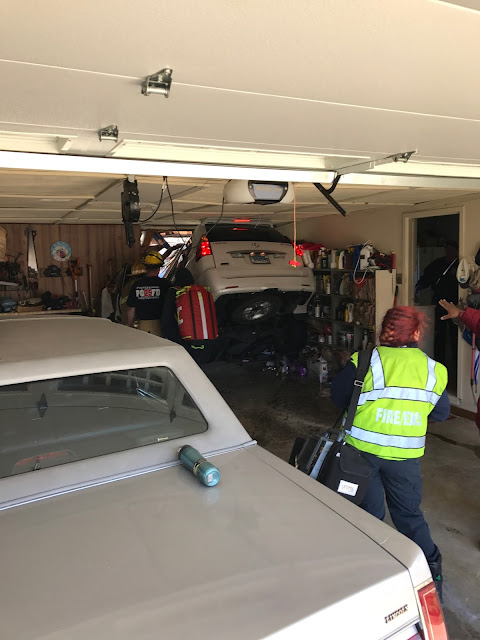 Posted by PGFD at 1:50 PM No comments: Links to this post


Prince George’s County Firefighters battled a fire in a District Heights townhouse this morning after several citizens called 911 to report the fire.  At around 8:30 am firefighter/medics were alerted to a fire in a townhouse in the 6000 block of Surrey Square Lane.  Battalion Chief 883 was the first to arrive and encountered a 2-story, middle of the row, townhouse with smoke showing from the front.  As additional units arrived a 360 check of the structure found fire showing on the rear of the townhouse.  A 360 is performed by first arriving firefighters to determine conditions on the rear and any available means of egress from the lower levels.

As hose lines were stretched and water supply established it was quickly determined that the home occupant had made it outside, albeit injured.  An update from firefighters operating on the rear side advised it appeared the fire started on a rear deck and extended up the exterior wall and into both floors of the townhouse interior.  It required about 15 minutes to extinguish the fire.

The homeowner, an adult male, was transported by ambulance to a local hospital for non-life threatening injuries.  The cause of the fire is undetermined.  Fire loss estimates are still being tabulated.

The townhouses on either side of the townhouse of origin were protected by firefighters that prevented any fire extension.  While the adjoining townhouses were not damaged by fire their utilities were shut off for safety reasons.  The County Citizen Services Unit will assist in determining the need for the American Red Cross and assistance for displaced residents.

The only injury was to the homeowner. 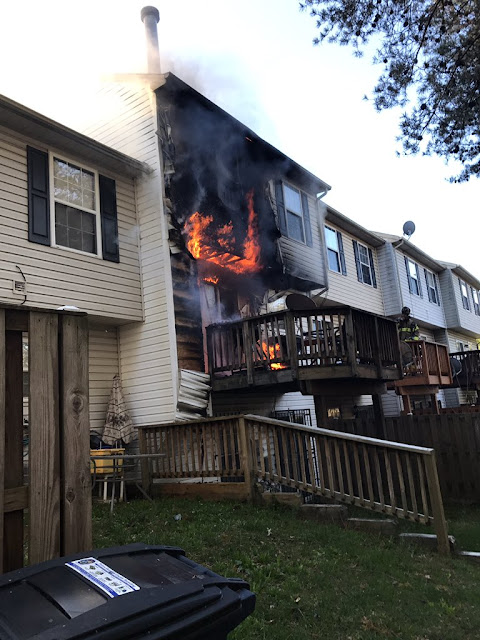 Posted by PGFD at 9:40 AM No comments: Links to this post