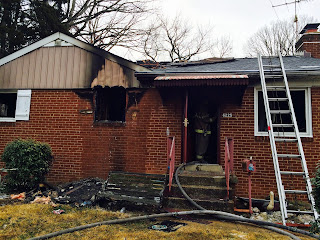 Mark Brady, PGFD PIO, 240-508-7930 A father and daughter were rescued by three Good Samaritans from their burning Berwyn Heights. A neighbor, passerby and a volunteer firefighter pulled the pair to safety prior to the arrival of firefighters.

The woman, 60ish years of age, and her 80ish year old father were transported to a Burn Center for treatment of smoke inhalation injuries. The daughter has been treated and released while the fTher remains hospitalized for observation.

Firefighter/Medics were alerted at about 9:15 this morning to a house fire in the 6200 block of Seminole Place in Berwyn Heights. Units arrived to find fire showing from a bedroom window from the 1-story single family home. The fire was quickly extinguished.

Two firefighters were injured while battling the fire. One sustained a shoulder injury and the other sustained minor burns. Both were transported to medical facilities, treated and released.

Fire Investigators determined the cause to be accidental and attributed to a cigarette. The fire caused an estimated $75,000 in fire loss.

The two family members may have escaped without injury, however, the home did not have any working smoke alarms. Having working smoke alarms combined with a home escape plan increases the chances of surviving a home fire by over 50%.
Posted by PGFD at 1:26 PM No comments: Links to this post