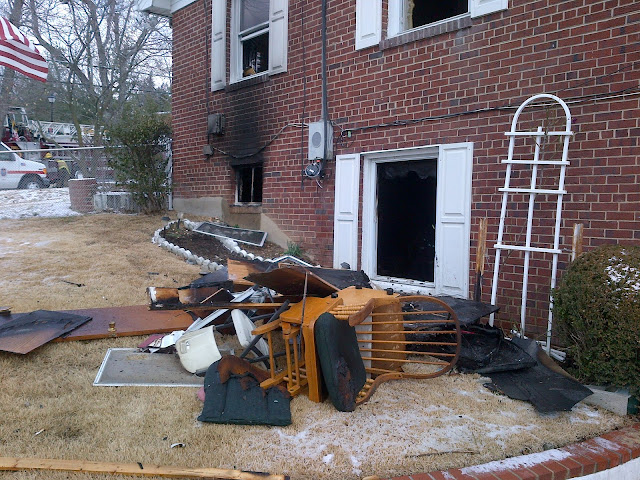 A second home fire in Temple Hills occurred at about 12:15 pm today. Firefighters were alerted to a house fire in the 2800 block of Curtis Drive and arrived to a 1-story home with a fire in the basement.
Firefighters extinguished the fire within 15 minutes of arrival and performed searches of the home with negative results.

Fire Investigators believe a electric space heater caused the fire after being left on when the husband and wife left the house to run errands.

No injuries occurred and fire loss is estimated at $75,000. The occupants, a husband and wife in their 80's, will be displaced and will be assisted by the County Citizen Services Unit and the American Red Cross.


Posted by PGFD at 2:16 PM No comments: Links to this post

Just before 11 am today a 911 call was placed reporting a house fire in the 3500 block of Everest Drive in Temple Hills. Firefighters arrived at the 1-story, with basement, brick single family home and found fire showing from the first floor. An interior search of the home and attack on the fire immediately commenced.

The fire was extinguished within 15 minutes of arrival and a primary search resulted in a female, 60ish years of age, being located on the first floor. She was removed and treated by paramedics. She was found to be not breathing and having no pulse. Paramedics performed emergency pre-hospital care, including CPR, and transported the patient to a nearby hospital where she remains in critical condition. No other civilian or firefighter injuries were reported.

The fire appears to have started in a first floor bedroom. The cause of the fire is under investigation. Preliminary fire loss is estimated at $75,000.

Prince George’s County homes constructed since the early 1990’s have a residential sprinkler system installed to save lives and protect property.  Therefore there are a large number of single family homes, in addition to commercial buildings and multi-family dwellings, that are equipped with these life-saving systems.  The Fire/EMS Department has documented hundreds of incidents since the law changed requiring residential sprinklers that demonstrate that lives have been saved and damage to property limited when fires have occurred.  Prince George’s County was the first County in the Nation to require the installation of residential sprinklers in all new home construction.

Home, apartment, condos and commercial building owners and management companies should take the time now to ensure that sprinkler systems are adequately protected against pipes freezing.  During long periods of below freezing temperatures exposed water-filled sprinkler pipes can freeze expanding the pipe to the point when it will break.  Sprinkler pipes tend to freeze before other water pipes because the water is not moving.  Most sprinkler systems are wet systems that contain water all the time.

When water freezes inside a sprinkler pipe, it creates an obstruction that can render the sprinkler system useless in the event of a fire. As the ice expands, it increases the internal water pressure in the pipe and causes the pipe to burst. Interestingly, the burst is often in a section of pipe that did not actually freeze.
Alternatively, the expanding ice can cause a pipe, fitting or sprinkler head to crack but the ice will block the flow of water while it is solid. In this case, the actual water damage will not be apparent until the ice melts and water flows out of the burst section.

The best way to protect a residential fire sprinkler system from freezing is to provide sufficient insulation and maintain adequate heat during the winter months.   Insulation helps block the flow of heat or cold from one space to the next. Most sprinkler pipes are within the walls or ceilings of a home. Cold air can enter these concealed spaces through small gaps in the exterior sheathing and insulation and find its way into pipe chases and soffits that focus the air directly onto the sprinkler piping and accelerate freezing.

In attics, piping should be as close to the ceiling as possible with insulation placed over the sprinkler pipe.  If you inspect your sprinkler pipes that are in the attic and you can see exposed pipes; they need to be insulated immediately to prevent freezing.

When sprinklers are required in unheated spaces such as attics or crawl spaces, the use of a dry system, or special dry sprinkler heads are required.

If a sprinkler pipe bursts ensure that the location of the water shut-off valve is known and the proper method to turn it off.  Contact a residential sprinkler professional immediately to initiate repairs.  It is recommended that a sprinkler system is tested and inspected on a periodic basis to ensure it is in proper working order to prevent against rupture and flooding.

Posted by PGFD at 11:09 AM No comments: Links to this post