Please see page 6 for an article that includes the Prince George's County Fire/Emergency Medical Services Department and some of our personnel.

Letter of Recognition for Compassionate Rescue

It was a frigid night in late December 2010 when an ambulance from Chillum-Adelphi was dispatched to check on a man in a wheelchair at a laundry mat on Eastern Avenue. The gentleman was stranded in a battery operated wheelchair unable to make his way back to the nursing home on Riggs Road, about a 2 mile distance. After exhausting all alternative means to have the man returned to the home, the crew from Ambulance 834 knew they could not leave him stranded. They contacted Hyattsville Fire/EMS Station 801 for their utility truck and radioed for advice from the EMS Supervisor. Working collaboratively, crews returned the gentleman to his residence courtesy of Ambulance 834 and his non-functioning wheelchair via utility 801 under the supervision of the EMS 801.

These members of the Prince George’s County Fire/Emergency Medical Services Department received letters of recognition from Acting Fire Chief Marc S. Bashoor. The letters were presented during a Battalion Chief’s Meeting at the Cranford-Graves Fire Services Building on Wednesday, January 12, 2011.

Receiving the Letters of Recognition were:


Each member received the following letter from Acting Chief Bashoor:

“Recently, I was informed of an incident that occurred on December 27, 2010, regarding a gentleman who resides at the Heartland Health Care Center, whose battery operated wheelchair had broken down. A834, UT801 and EMS801 responded on the call and provided assistance, ensuring that the gentleman arrived safely back at the nursing home. Weather conditions that evening were frigid, and prolonged exposure to the elements could have resulted in a tragedy.

Actions by Fire Fighter Anthony J. Wallach, Captain Roland Berg, and Volunteer Fire Fighters John Wakeley, William Price and Daniel Leyden, are highly commendable, and should be emulated by all members of the Prince George's County Fire/Emergency Medical Services (EMS) Department. The spirit of cooperation among all of the crews involved in resolving this issue shows each one’s commitment to providing the highest level of service to the citizens and residents we serve.

It is with great pleasure that I recognize you for your outstanding performance. Without your rapid intervention, the outcome could have been very different. On behalf of the Prince George's County Fire/EMS Department, the citizens and residents of the County, and myself, I would like to thank you for a job well done.”

Posted by PGFD at 4:04 PM No comments: Links to this post

MEDIA CONTACT: Mark E. Brady, Chief Spokesperson, 240-508-7930, mebrady@co.pg.md.us
Just before 10:00 am, Thursday, January 13, 2011, Firefighter/Medics from District Heights and surrounding communities were alerted to a house fire in the 2000 block of County Road. Firefighters arrived quickly at a 2-story wood-frame structure with smoke and fire showing from the second floor. An aggressive interior attack was initiated and primary searches for occupants were made. The fire was extinguished and contained to the room of origin.


An adult male was the only one home when he was awakened by finding himself choking from the thick smoke. He exited the home and sustained injuries while doing so. The occupant stated the home was equipped with a smoke alarm, however, did not activate for unknown reasons. Paramedics tended to his injuries on the scene and transported him to an area Burn Unit for minor burns and possible smoke inhalation.

The fire appears to have started in a second floor bedroom. The cause of the fire remains under investigation and preliminary fire loss is estimated at $40,000. Firefighters rapid containment of the fire limited the amount of damage to the house.  The home will not be livable until repairs are made and the family will be temporarily displaced. The Fire/EMS Department’s Citizen Services Unit will be assisting the family of 3 adults and 2 children with temporary shelter.

The Fire/EMS Departments reminds citizens and residents that smoke alarms should be tested at least once-a-month by activating the test button on the face of the detector and ensuring an alarm sounds. If the alarm is not working; replace the batteries or get a new alarm. Fresh batteries should be installed at least once-a-year. For a smoke alarm installed in your home, free of charge, call our Safety First Smoke Alarm Line at 301-864-SAFE (7233). Remember; SAFETY FIRST – Everyone Goes Home.

UPDATE - Fire Investigators have determined a space heater ignited nearby combustibles causing the fire.  Fire loss was estimated at $50,000.  Remember to "give space heaters space" at least 3 feet in any direction. 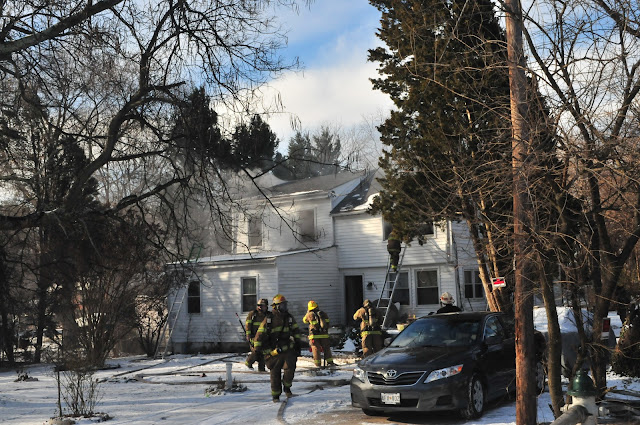 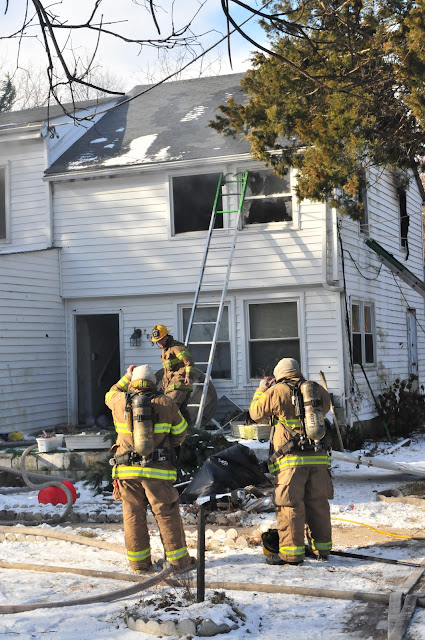 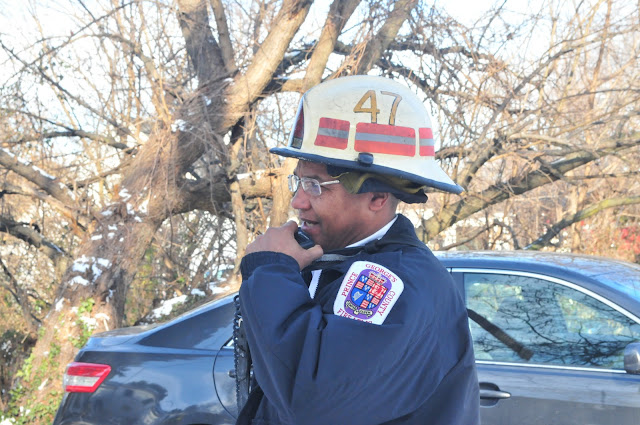 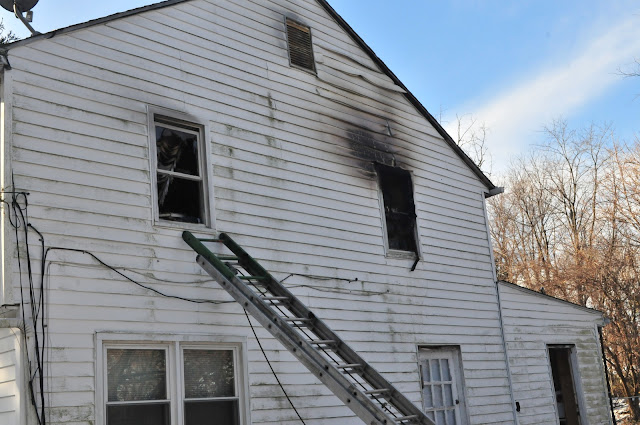 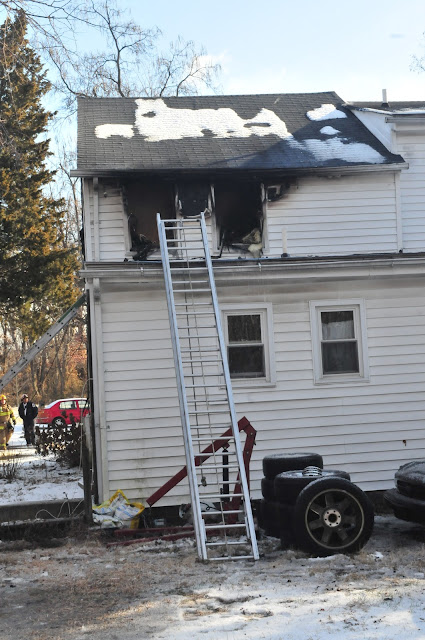 Posted by PGFD at 12:21 PM No comments: Links to this post

Prince George’s County Fire Investigators are still searching for the cause of two house fires that occurred late Wednesday, January 12, 2011. Strong wind gusts and freezing temperatures added to the challenges in battling these fires.


The first fire occurred in Cottage City just after 8:00 pm when firefighters responded to a house on fire in the 4000 block of Lawrence Street. The first arriving unit from Bunker Hill Fire/EMS Station #855 advised of a 2-story single family home with heavy fire showing. Suppression was initiated from the safety of the exterior and once the bulk of the fire was knocked down, firefighters entered the structure to complete a search and extinguishment. Strong wind gusts, it is believed, fanned the fire over to a neighbor’s house via burning embers or radiant heat from the house of origin. Additional firefighters and resources were summoned and both fires were quickly brought under control.

It required forty-four firefighters 30 minutes to knock down the bulk of the fire in both houses. No civilian or firefighter injuries were reported. The Fire/EMS Departments Citizen Services Unit and the American Red Cross were on the scene to offer assistance to a total of 8 displaced residents; 5 from the house of origin and 3 from the neighbors house.

The cause of the fire remains under investigation with fire loss estimated at $100,000.

The second incident occurred at about 11:30 pm in Fort Washington. Firefighters were dispatched to the 7200 block of LaVonda Court for a house on fire. Barking dogs in a neighbor’s back yard alerted the pets’ owner to look outside and check why the dogs were agitated. Upon doing so, she witnessed smoke and fire coming from the neighbor’s roof. She immediately went next door and alerted the occupants that their house was on fire. The 2 adults and 1 child, unaware of the fire, escaped safely while their neighbor called 911.

Firefighters arrived to find a 2-story home with heavy fire consuming the roof area. One firefighter sustained 2nd degree burns to his upper body while battling the fire. He was transported by medics to a Burn Unit where he was held until this morning and released. Wind gusts helped with the rapid spread of the fire and created dangerous conditions for firefighters as they fought the fire. At one point, all firefighters were evacuated from the structure and the remainder of the fire was fought from the safety of the exterior. It required fifty firefighters 90 minutes to extinguish the fire.

The cause of this fire remains under investigation and fire loss is estimated at $150,000. The Fire/EMS Departments Citizen Services Unit provided assistance to the occupants who are staying with other family members.