The Show Must Go On - Firefighters Make ICE Happen 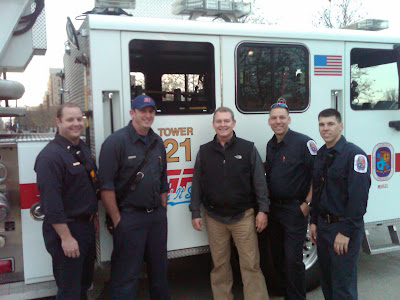 Typically; when a firefighter utilizes a hydrant with the end result being the large formation of ice you would expect that a fire occurred on an extremely cold winter day. The temperatures were above normal and there was no fire the day firefighters helped to tap into a hydrant that would flow water to form tons of ice at the National Harbor. These actions occurred recently to help construct a part of the “Gaylord’s Christmas on the Potomac,” an attraction that includes a walk-through winter wonderland carved entirely of ice. To begin forming this winter wonderland attraction production crews required water and a lot of it.

The show producers had difficulty in figuring out the on-site hydrant and the configuration of the hydrant and their appliances to make a secure connection. Mr. Robert Keith from Willy Bietak Productions of Santa Monica, California, contacted several sources attempting to remedy his delimia. With no resolution and no where else to turn he contacted the firefighters at Oxon Hill Fire/EMS Station #821 – D Shift.

The officer-in-charge of Station #821, Fire Lieutenant Michael Marshall, described their encounter, “Upon arrival Mr. Keith showed us his problem and we connected a couple adapters and secured his water issue. We were advised by Mr. Keith that everything works well and they have the ice rink up and running.” The firefighters took the opportunity to conduct a walk-through review of the area being utilized which is sure to attract thousands of visitors.

Mr. Keith followed-up with a letter of thanks, writing, “From all of us here at the Holiday Ice Rink in National Harbor, many thanks for you and your Stations help with the water source. Without your assistance we would have not been able to do what we do. Firefighters know fire hydrants better than Hotel Technicians. All the best, Happy Holidays.”
Posted by PGFD at 11:22 AM No comments: Links to this post