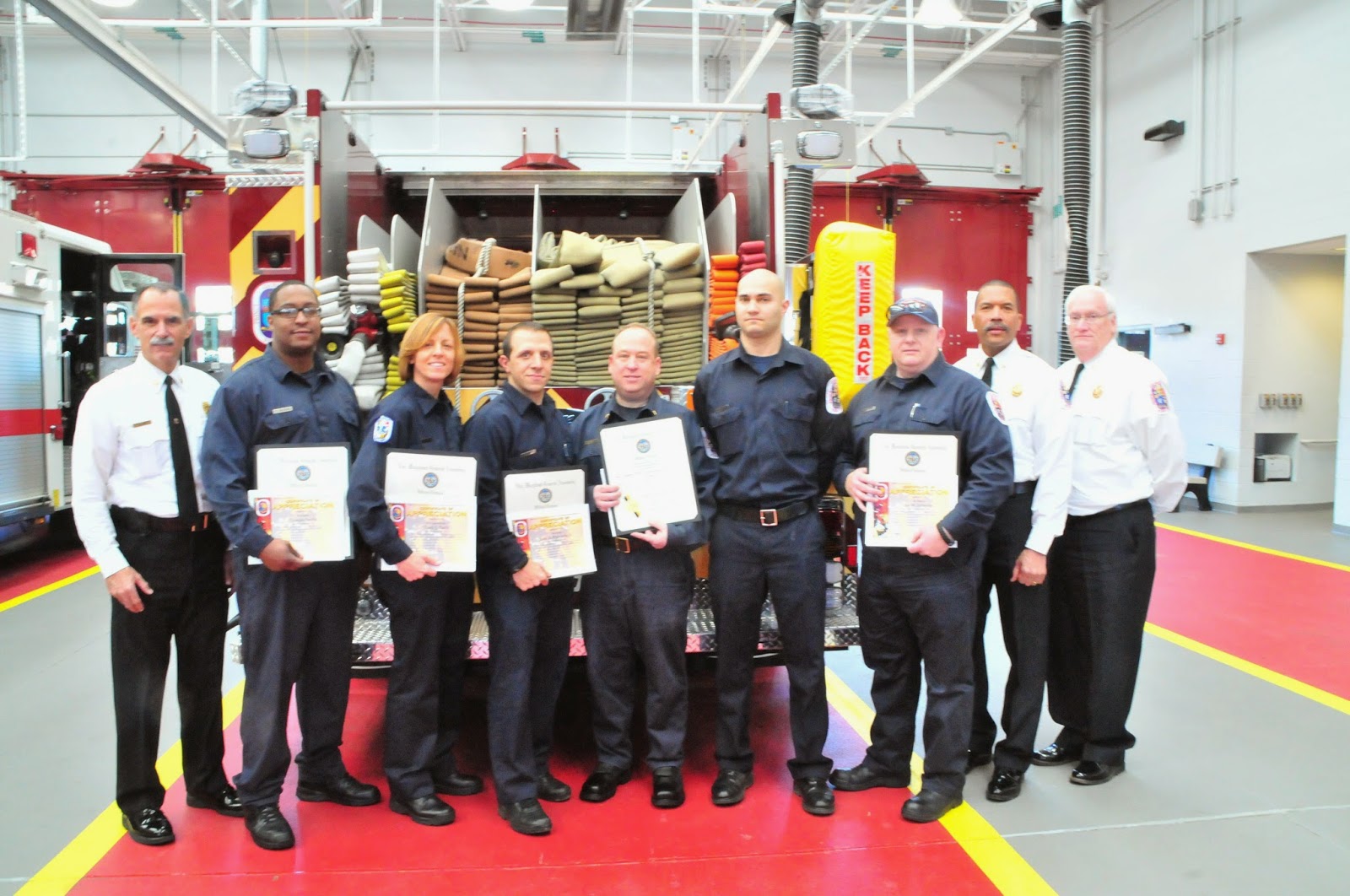 The awards were presented at the St. Joes Fire/EMS Station in Springdale.  The following is a description of their actions.

On the evening of Sunday, June 15, 2014, units from Capitol Heights Fire/EMS Stations 805 and Largo Medic 846 responded to the 7600 block of Central Avenue for a reported motor vehicle collision.  Callers to Public Safety Communications (PSC) described the accident as involving a single vehicle, “with possible injuries.”  Crews from Station 805 arrived on the scene to find an SUV that had gone off the roadway onto a grassy area.  It had struck a large concrete curb and culvert leading into a parking lot, incurring moderate front-end damage with airbag deployment.  Ensuring the scene was safe, crews approached the vehicle and observed its driver standing outside and two victims trapped inside.  Immediately, Command was established and additional resources were requested.  A 50-year-old female front seated passenger was pulseless and not breathing, while a 74-year-old female had been ejected from the rear up into the console area.  She was positioned upside down and entangled in the seat belt of the victim seated in the front.  As crews were attempting to place a collar on her, they realized she was no longer breathing.  Following a rapid extrication, without the use of any heavy-duty equipment, the patient was disentangled and removed through the driver’s door.  She was then loaded into Ambulance 805 and ventilations were initiated.  A primary assessment revealed that while she had stopped breathing she had a strong carotid and radial pulses.

Medic 846 arrived on the scene and took control of the patient.  The crew hurriedly boarded Ambulance 805 and began assisting with patient care.  The critically injured woman was transported to Prince George’s Trauma Center, with Ambulance 805 and Medic 846’s crew working intensely to give her the best possible chance for survival.

The patient remained unconscious during the ride to the trauma center but was attempting to breathe on her own.  According to hospital staff, she regained consciousness the next day and the breathing tube was removed.  The woman was discharged to a rehabilitation facility six days later, at which time she was alert, oriented, and showed no evidence of any residual significant traumatic injuries.

Tragically, the accident did claim the life of one person and seriously injured another.  However, the organized teamwork and rapid care provided on this incident prevented what likely would have been multiple fatalities.

While presenting the awards today Fire Chief Bashoor told each of the recipients, "Your performance on the scene of the aforementioned incident significantly contributed to saving the life of a gravely injured patient.  Therefore, you are hereby awarded a Fire/EMS Department Emergency Service Award.  Your actions not only speak well of you personally but also illustrate the excellent caliber of service the Fire/EMS Department strives to provide to the citizens of Prince George’s County."


Posted by PGFD at 5:31 PM No comments: Links to this post

Colder temperatures are in our immediate forecast and the men and women of the Prince George’s County Fire/Emergency Medical Services (EMS) Department (PGFD) want you to stay safe while staying warm.  We are joining the United States Fire Administration (USFA) and the National Fire Protection Association (NFPA) to remind everyone that home fires are more prevalent in cold weather than in any other time of the year. This is due in part to an increase in cooking and heating fires. Holiday decorations and winter storms that can interrupt electrical service and cause people to turn to alternative heating sources also contribute to the increased risk of fire in winter.  This reminder involves the safe use of space heaters and general heating safety tips.

The USFA, NFPA and the PGFD want to remind everyone that fire safety and prevention are especially important during times of cold temperatures.  “Temperatures drop and fires increase,” said Prince George's County Fire Chief Marc S. Bashoor.  According to NFPA statistics space heaters account for about one third of the home heating fires yet more than 80 percent of the home heating fire deaths.

Cooking and heating are the top causes of fires during cold weather.   “The winter season brings the highest number of home fires than any other time of year,” said Fire Chief Bashoor. “Each winter season, home fires increase in part due to cooking and heating fires. Fire safety and injury prevention must not be lost in an effort to stay warm. Stay warm and do so safely.”

The men and women, career and volunteer, of the Prince George's County Fire/EMS Department recommend the following safety tips for space heaters.

• Buy only heaters evaluated by a nationally recognized laboratory, such as Underwriters Laboratories (UL).


• Check to make sure it has a thermostat control mechanism, and will switch off automatically if the heater falls over.

• Heaters are not dryers or tables; don't dry clothes or store objects on top of your heater.

• Always unplug your electric space heater when not in use.     Turn off at night or whenever you sleep.

Finally, having a working smoke alarm dramatically increases your chances of surviving a fire. Remember to practice a home escape plan, including 2 ways out of every room,  frequently with your family.

Residents of Prince George’s County can contact 311 and request a smoke alarm or battery.  A firefighter will install a working smoke alarm in your home; free of charge.   For additional information from the USFA and NFPA on Winter Fire Safety; click here.
Posted by PGFD at 9:34 AM No comments: Links to this post