Two Prince George’s County Fire Fighter/Medics were injured and their unit sustained significant damage in a crash on the Capital Beltway in Oxon Hill this evening.  Just after 8:00 pm, Monday, January18, Paramedic Ambulance 821, from the Oxon Hill Fire/EMS Station on Livingston Road, had just cleared a call and was returning to the station.  While travelling on the Inner Loop of the Capital Beltway approaching the St. Barnabas Road exit a civilian vehicle side swiped the unit on the drivers side.  The collision was hard enough it caused the unit to move across the Beltway towards the slow shoulder.  The ambulances travelled head-on into a steep muddy and tree filled embankment.  It travelled several more feet on the soft shoulder striking a light pole and coming to rest in a ditch.

Both medics on board sustained injuries and were transported to a Trauma Center for evaluation and treatment.   The injuries are non-life threatening.  The striking vehicle continued up the Beltway another 200 yards and stopped on the shoulder.

As of 11:00 pm, both medics were listed in good condition and were still being evaluated at the Trauma Center.

The County Police Department was interviewing the driver of the striking vehicle and information about any possible charges was not immediately available.

A rather bizarre secondary incident occurred when the Paramedic Ambulance struck the light pole.  The light poles along the Beltway are designed to break away from the base when they are struck.  This allowed the pole to fall towards the travel lanes.  A vehicle was slowing as the crash had occurred just in front of him.  The pole pierced his roof, went through the interior and came out the bottom of the car.  The pole missed striking the vehicle driver by mere inches.  He was able to walk away from that episode unharmed. 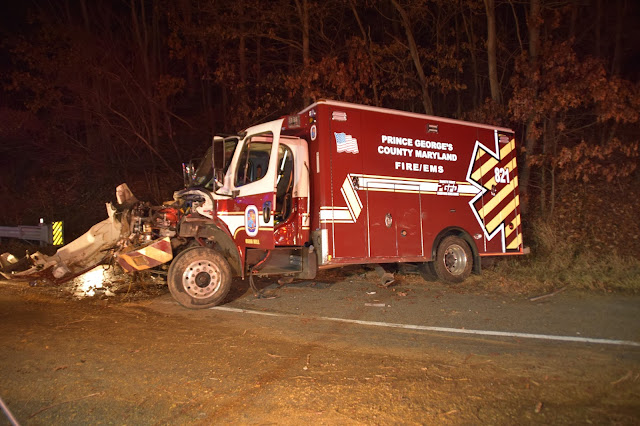 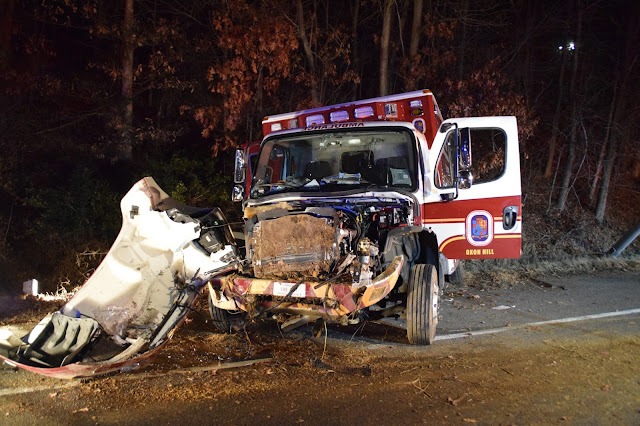 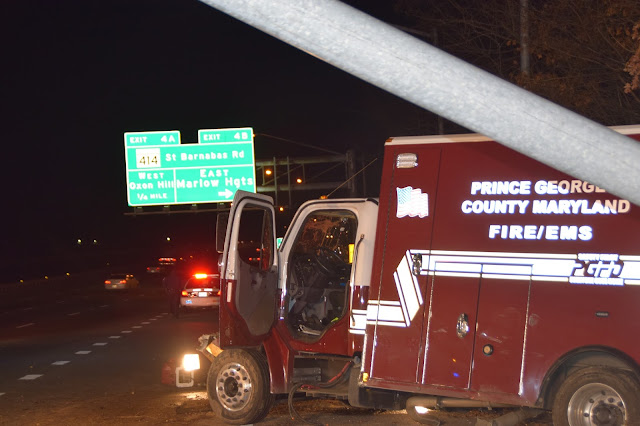 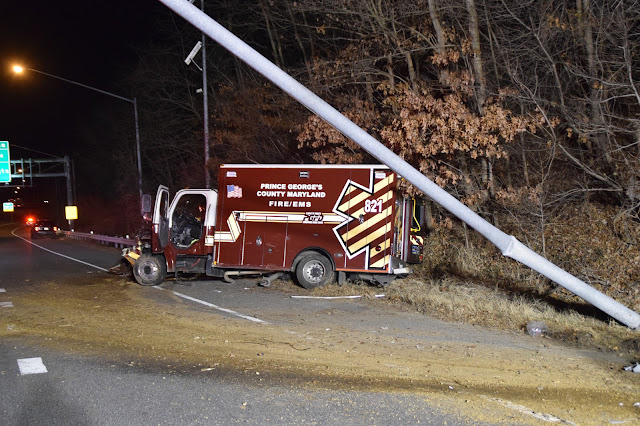 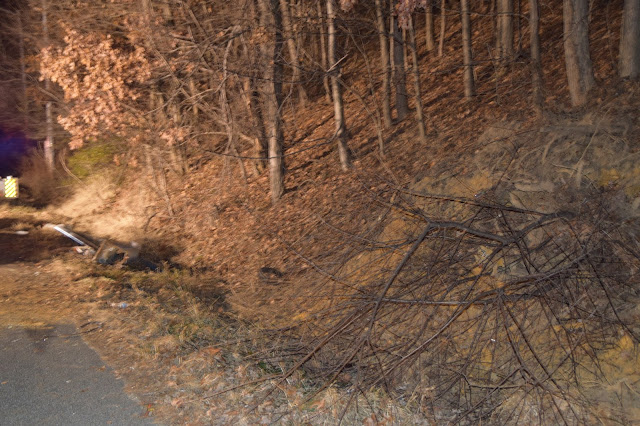 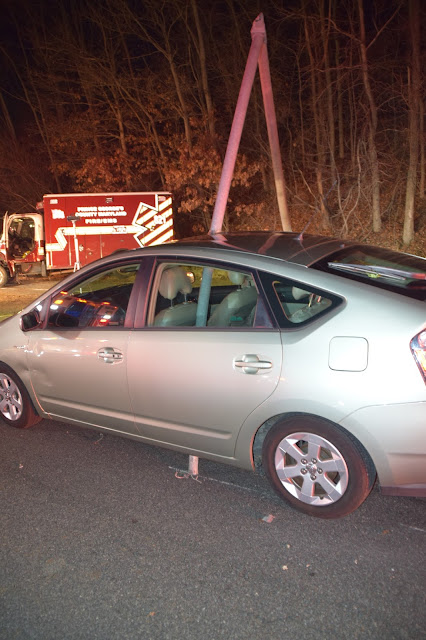 Posted by PGFD at 11:53 PM No comments: Links to this post

With colder temperatures and dangerously low wind chills being a part of our forecast, The Prince George's County Fire/Emergency Medical Services (EMS) Department wants our residents to avoid serious health problems that can occur due to prolonged exposure to cold weather. The two most common conditions are hypothermia and frostbite.  Remember, by staying healthy will help the Fire/EMS Department by you not having to call 911 for an ambulance.

The Fire/EMS Department would like to share recommendations by our Health Department for you to stay healthy during cold weather.

All residents must take precautionary actions as a primary defense against injuries and illness resulting from extreme cold weather conditions. When exposed to cold weather, our bodies lose heat faster than it can produce it, resulting in bodily injury, illness, and even death.

The Fire/EMS Department advises all residents to check on your elderly relatives and neighbors to ensure they have adequate heat and protection from the cold.  Limit the amount of time your pet spends outside.  Indoor pets when outside in the freezing cold, can also contract hypothermia very quickly.

Hypothermia is one of the serious health problems that can be caused by exposure during cold weather.  If a person’s body temperature drops below 95 degrees, immediately seek medical attention.

In mild cases the symptoms include:

Other more serious signs include:

In the case of serious symptoms, contact the victim’s doctor or call 911.

In either case, until help arrives or a doctor sees the person, move the person to a warm room, warm the body with dry layers of blankets or clothing, and give warm beverages.

Frostbite refers to actual freezing and subsequent destruction of body tissue which is likely to occur any time skin temperature gets much below 32F.  The areas most likely to freeze are toes, fingers, ears, cheeks and the tip of the nose.

Individual at risk for frostbite include those with impaired circulation, the elderly, the very young and anyone who remains outside for prolonged periods.  The danger increases if the individual becomes wet.

Symptoms of frostbite include:

•    Gradual numbness;
•    Hardness and paleness of the affected area during exposure,
•    Pain and tingling or burning in affected area following warming; and
•    Possible change of skin color to purple

NEVER MASSAGE OR RUB FROSTBITTEN AREAS AS THIS MAY CAUSE FURTHER DAMAGE TO THE SKIN.

Follow these tips to weather the winter in a healthy way:

•    Cover your head.  You lose as much as 50 percent of your body heat through your head.
•    Wear several layers of lightweight, loose fitting clothing.  The air between the layers acts as insulation to keep you warmer.
•    Cover your mouth with a scarf to protect lungs from direct, extremely cold air.  Cover your ears and lower part of your face as well.
•    Wear mittens rather than fingered gloves.  The close contact of fingers helps to keep your hands warm.
•    Wear warm leg coverings and heavy socks or two pairs of lightweight socks.


•    Wear waterproof boots or sturdy shoes to keep your feet warm and dry.
Posted by PGFD at 1:38 PM No comments: Links to this post

Can’t stand being outside in the cold temperatures?  Imagine how your pet feels.  When frigid air hits, the Prince George’s County Animal Management Division reminds pet owners that if it’s too cold for you to be outside, it’s too cold for your pets and advises owners to keep their animals indoors and to closely monitor their exposure to winter elements.  But if your pet must stay outdoors, County law requires you to provide the following protection:

·         A dog house of appropriate size that is dry, draft free and elevated off the ground.
·         A wind flap attached to the doghouse to keep cold air out and warm air in.
·         Non-absorbent bedding like straw or wood shavings to help keep the dog warm.
·         Fresh drinking water; routinely check your pet’s drinking water to make sure it is not frozen and use a secured container to prevent tipping.
Other cold weather safety tips pet owners should consider include:
If you’re looking for a dog or cat to keep warm in your home, contact the Animal Services Facility at (301) 780-7200 or visit www.princegeorgespets4us.com.
# # #
Posted by PGFD at 1:23 PM No comments: Links to this post