Just after 4:30 pm, Wednesday, August 8, firefighters were alerted to a house fire in the 6300 block of Carrington Court in Capitol Heights. 911 callers advised dispatchers they believed people were trapped in the burning home.

Firefighters arrived within 4 minutes to find a 2-story brick duplex with heavy fire on the first floor with extension into the top floor. Firefighters also encountered a 24-year-old male in the front yard with serious burns to his upper body. He told firefighters the approximate location of two occupants still inside the house.  Trapped upstairs were his 5-year-old daughter and 15-year-old brother.

A 5-year-old female and a 15-year-old male were handed over to paramedics that quickly assessed the patients as having severe burn injuries, were not breathing and had no pulse.

As firefighters continued to battle the fire another group of firefighter/medics worked feverishly to save the victims. Pre-hospital advanced life support measures were immediately initiated and the two youths were transported to a nearby hospital with CPR in progress.  The 24-year-old male was transported to a Burn Unit in Washington DC suffering 3rd degree burns to about 50% of his body.  The adult males mother, a 52-year-old female, came home shortly after firefighters arrival. She was transported suffering from emotional distress.

Incident Commanders had requested additional Fire and EMS resources to the scene during the height of the incident. A total of 60 firefighters and paramedics operated on the scene. It required 20 to 30 minutes to extinguish the fire.

The cause of the fire remains under investigation.

At around 8:00 pm, tragically, the 5-year-old female succumbed to her injuries.

The 15-year-old male has regained a pulse and stabilized enough to relocate him to the Burn Unit at the Washington Hospital Center. He remains in critical condition.

The identity of the deceased is being withheld pending extended family notification.

The home was equipped with two working smoke alarms.  Firefighters will return to the Capitol Heights community on Thursday, August 9, at 10:00 am.  Personnel will meet at Carrington Court and go door-to-door speaking with residents about the incident, checking smoke alarms and passing out fire safety literature.

Posted by PGFD at 9:50 PM No comments: Links to this post

The Bowie Citizens for Local Animal Welfare (Bowie CLAW) is comprised of compassionate people who bring together various skills and knowledge to move forward our mission of advocating for the interest and welfare of animals in the Bowie and Greater Bowie area.  On Tuesday, August 7, officials from the organization visited the Northview Fire/EMS Station 816 and accepted a quantity of pet oxygen masks in enclosed toolboxes.  The pet O2 masks come in 3 different sizes that accommodate the different sizes of animals that could be encountered.  Each kit costs about $100.  Bowie Claw generated funds for the purchase of the O2 kits during a spaghetti fundraising event held at the Bowie Volunteer Fire Department on Annapolis Road.  Bowie Claw has additional kits that they will donate to other area fire departments as well as to police canine teams.

Firefighters sometimes encounter family pets during residential fires.  If possible and staffing is available, every attempt to revive a pet, using these pet O2 masks, will be made.

The donation from Bowie Claw will bring a total of 50 kits available in the Fire/EMS Department.  This donation will augment a previous donation made by the Canine Fitness Center in Millersville, MD. 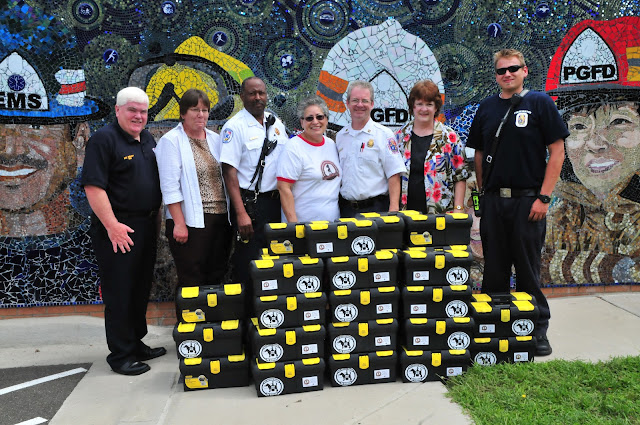 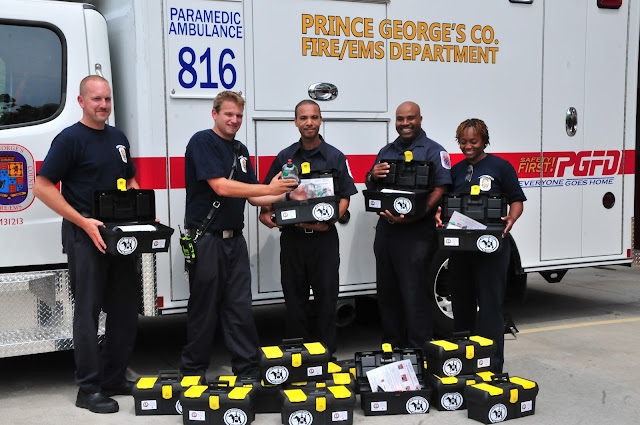