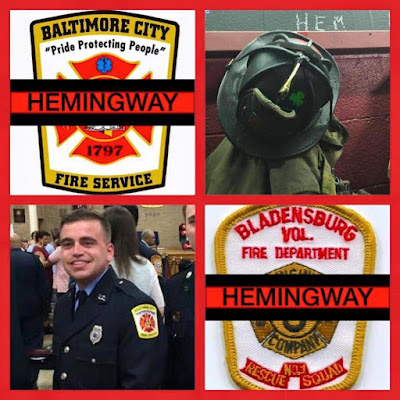 Nicholas Hemingway was serving as a paramedic with the Baltimore City Fire Department, a position he held since being hired in November 2014.  After completing his shift on Tuesday, July 14 and preparing to leave his work site, he experienced an unknown medical episode that put him into cardiac arrest.

Despite the very best efforts of everyone who worked to revive him, Hemingway passed away at Mount Sinai Hospital in Baltimore on Friday, July 17.  Members of the Baltimore City and Bladensburg Volunteer Fire Departments stood a constant vigil at his bedside since Tuesday.

It is with deep regrets the Officers and Members of the Bladensburg Volunteer Fire Department and Rescue Squad, Inc. announce the death of Firefighter Nick Hemingway.

Nick was hospitalized after a Cardiac Arrest late Tuesday afternoon while at work, as a Paramedic with the Baltimore City Fire Department. He had been feeling ill throughout the day. No further details are available at this time.
Please offer thoughts and Prayers to the Hemingway family, his girlfriend Natalie, the brothers and sisters of the Baltimore City Fire Department; Firefighters Local 734, Fire Officers Local 964, Prince George's County Firefighters Local 1619, Chillum-Adelphi Fire Department Station 34 and the many other friends that Nick had.
Nick was assigned to Medic 11 as an Active Paramedic, working out of the Liberty Heights Fire Station. Nick graduated the academy in recruit class 14-02. He held membership in Burtonsville - Montgomery County Station 15, Chillum-Adelphi - Prince George's County Station 34 and currently our family.
Arrangements will be posted as they become available.
On behalf of County Executive Rushern L. Baker III, Fire Chief Marc S. Bashoor and all the career, civilian and volunteer members of the Prince George's County Fire/EMS Department, we offer our sincerest sympathy, thoughts and prayers to the family and friends of Nick Hemingway as well as to the members of the Baltimore City and Bladensburg Volunteer Fire Departments.