MEDIA CONTACT: Mark E. Brady, Chief Spokesperson, 240-508-7930, mebrady@co.pg.md.us
A Hyattsville family has suffered a tragic loss as a result of a house fire this morning. Just before 4:00 am, Wednesday, January 19, 2011, firefighters and paramedics were alerted to a house fire with children trapped inside the burning home. Five family members were able to exit the house, however, two young sisters did not.

Firefighters arrived quickly at the 1 ½ stories, wood frame, single-family home at 4709 40th Avenue and found heavy fire consuming the front portion of the first and second floors. Initial arriving firefighters from Bunker Hill, Bladensburg, Hyattsville and Chillum-Adelphi mounted an aggressive interior attack as well as a search and rescue. While hose lines were advanced into the burning home, teams of firefighters searched quickly for the 2 children reported still inside. Through a collaborative effort of suppression and search the two were soon located.

A 9-year-old female was located on the first floor by firefighters from Bladensburg and a 13-year-old female was found in a second floor bedroom by the crew from Hyattsville. The patients were removed from the home and their conditions were quickly assessed as having no pulse and not breathing. Firefighters started CPR and Paramedics provided advanced pre-hospital care. The pair of sisters were transported to area hospitals in extremely critical condition.

The mother and father; 30ish and 40ish years of age respectively, a 30ish-year-old uncle and two additional siblings; 4-year-old female and a 13-year-old female, had self evacuated prior to the Fire Departments arrival. The 4-year-old and 13-year-old sisters were transported, initially in critical condition, to an area hospital for smoke inhalation. The mother and father were also transported to an area hospital after remaining on the scene for about an hour.

• The 9-year-old-female succumbed to her smoke and burn injuries a short time after arriving at Children’s National Medical Center in Washington, DC. She has been identified as Kimberly Hernandez. Her sister has been transferred to a hospital in Baltimore with a hyperbaric chamber. She remains in extremely critical condition.

• The other two siblings have been improving as the day progressed and are in stable condition.

• Fire Investigators state the fire appears to be “accidental” in nature. The exact cause of the fire will not be released until post-autopsy. Fire loss is estimated at $350,000.

• Two firefighters sustained injuries and have been treated and released from their respective hospitals.

Any Prince George’s County citizen or resident may request a smoke alarm installed In their home free of charge by calling our Safety First Smoke alarm line at 301-864-SAFE (7233).

The 1:00 pm incident update can be viewed here:

Posted by PGFD at 4:12 PM No comments: Links to this post

Just before 4:00 am. Wednesday, January 19, 2011, firefighter/Medics were alerted to a house fire with children trapped.  Upon arrival in the 4700 block of 40th Avenue in Hyattsville, fire/EMS units encountered a 1 1/2/ story, wood frame, single family home with heavy fire conditions consuming the front portion of the house.  Firefighters mounted an aggressive interior attack on the fire and a search for the trapped occupants.

Firefighters quickly located 2 females, one on the first floor and one on the second floor, and removed them from the house.  They were quickly assessed as non-breathing and without a pulse and CPR was initiated.  Paramedics provided pre-hospital care and transported the two sisters to area hospitals.  Their condition this morning was reported as extremely critical and grave.

An adult male and female, mother and father, were able to escape their burning home with two other daughters.  These occupants were also transported to area hospitals.

One firefighter sustained burns to his feet and transported to a Burn Unit at the Washington Hospital Center.  He was treated and released.

The cause of the fire is under investigation and fire loss is estimated at $350,000 for the structure and contents.

Prince George's County Acting Fire Chief Marc S. Bashoor provided a media update at 7:30 am which can be viewed below.  He is expected to provide updated information at about 1:00 pm on the scene of the incident.  At that time firefighter/Medics will be going door-to-door providing fire safety information and new smoke alarms, if needed.

Additional information will be provided as it becomes available. 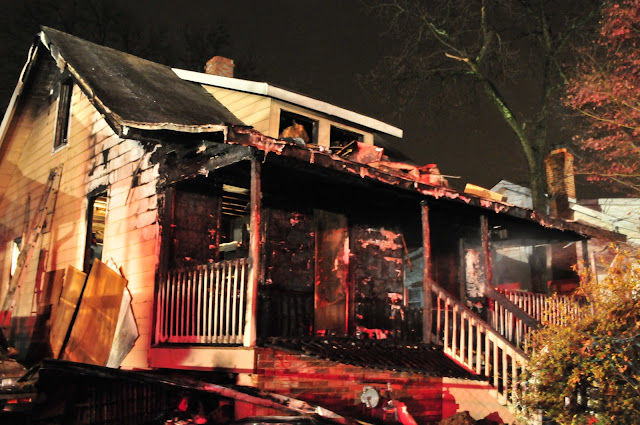 Posted by PGFD at 9:39 AM No comments: Links to this post