A Capitol Heights home scheduled for a Christmas in April renovation project tomorrow morning sustained significant damage from a fire this afternoon.  Just after 2:00 pm, Friday, April 26, firefighters responded to a reported house fire in the 100 block of Iago Avenue.  Fire/EMS units arrived to find a 1-story single family home with fire showing from the rear of the structure.  An interior attack was initiated and a fire in a bedroom was quickly contained and extinguished.  The fire caused an estimated $50,000 in estimated fire loss and displaced the two adult occupants.  Fortunately, there were no injuries.  The cause appears to be electrical in nature but official remains under investigation.

Christmas in April is a non-denominational volunteer organization that repairs the homes of senior citizens who are either low-income and/or physically challenged so they may live in warmth, safety, and independence.

After months of planning and preparation, Christmas in April culminates in a one day repair effort on the last Saturday in April.

Christmas in April relies on the community for support from volunteers to repair the homes, and seeks funding from businesses, corporations and individuals.

The success of Christmas in April is due to the cooperative efforts of County government, private businesses, civic and community organizations, churches and synagogues.

Members of the Prince George's County Fire/EMS Department are scheduled for several home renovation projects Saturday morning at homes throughout the County.
Posted by PGFD at 6:53 PM No comments: Links to this post

Firefighters made their way to a second floor bedroom where the fire originated and initiated an interior attack.  The fire extended up into the attic area before being extinguished.  The adjacent townhouse was not damaged, however, vinyl siding on the adjacent row of townhouses melted from the heat of the fire some 50 feet away.

There were about 50 firefighters on the scene.  The bulk of the fire was knocked down with 15 minutes of arrival.

The fire appears to have started in the second floor master bedroom.  The cause remains under investigation but does not appear suspicious.  Fire loss is estimated at $150,000.  An adult female occupant and her dog will be displaced and are being assisted by the Citizen Services Unit and the American Red Cross.

No injuries were reported. 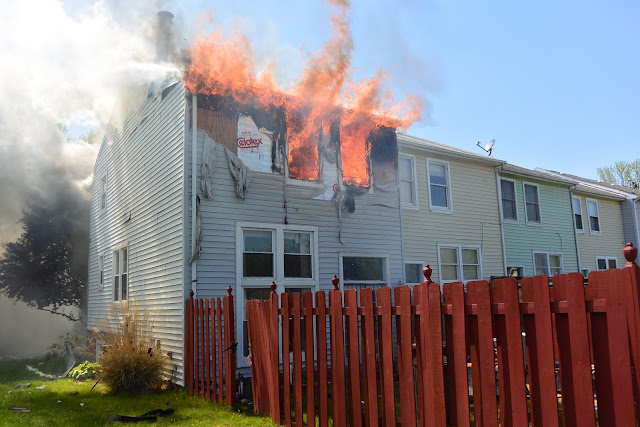 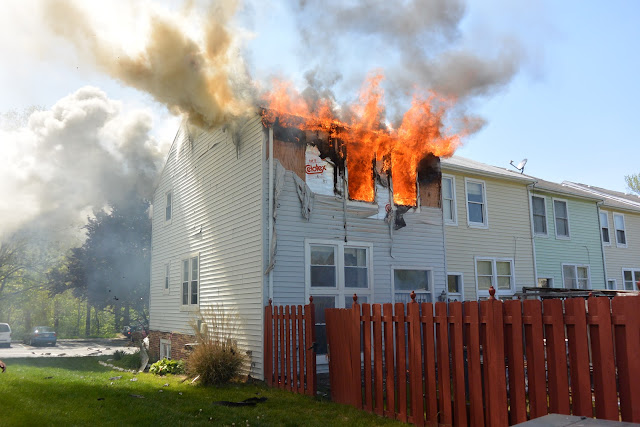 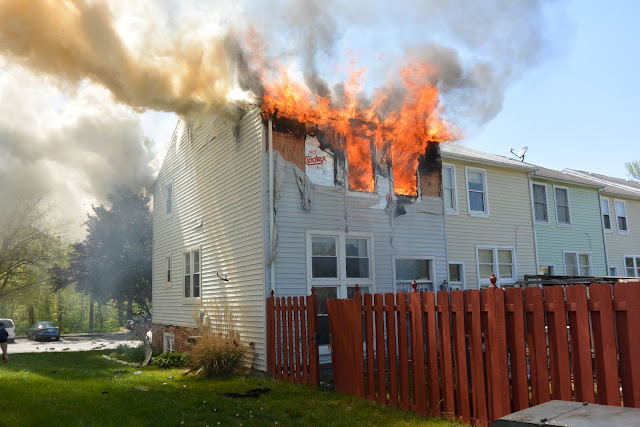 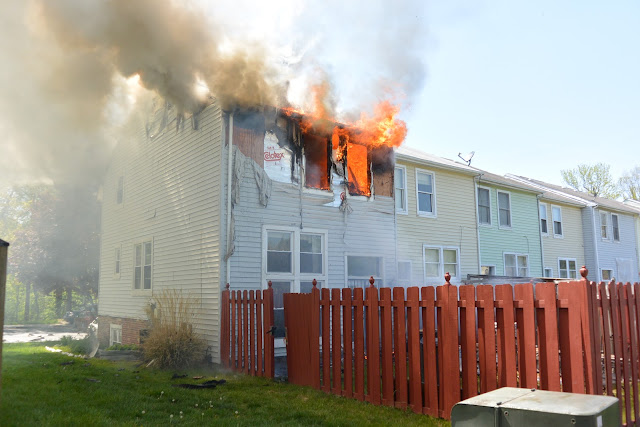 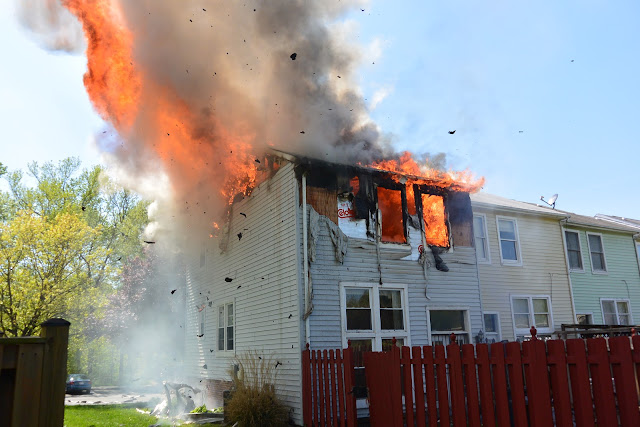 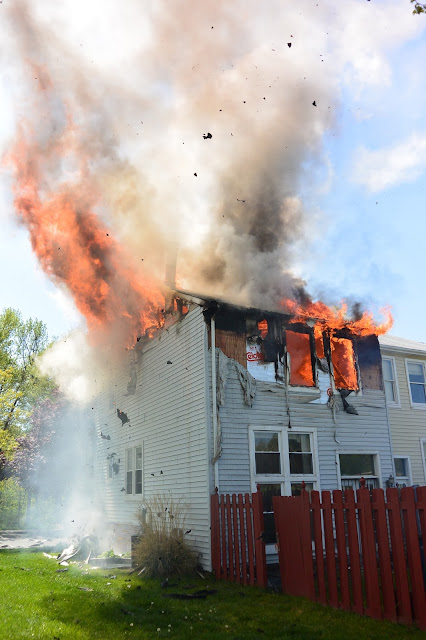 Posted by PGFD at 6:24 PM No comments: Links to this post

A pair of Prince George's County Fire/EMS Paramedics were recognized today for their skills while providing treatment to an adult female in active labor with an imminent delivery.  Fire Fighter/Medics John A. Bowman and Kacie E. Pressley were recognized at a ceremony held at the Prince George's Hospital Center where this incident came to a sucesful and happy conclusion.

On Saturday, February 29, 2013, Bowman and Pressley were the crew on board the Paramedic Unit from Fire/EMS Station 830 that was dispatched to a home on 58th Place in Cheverly for a report of a female in labor. During the patient assessment, the medics observed an umbilical cord presentation without any sign of birth. Umbilical cord presentation or prolapse is a rare obstetrical emergency that occurs when the umbilical cord descends alongside or beyond the fetal presenting part. It is life-threatening to the fetus since blood flow through the umbilical vessels is usually compromised from compression of the cord between the fetus and the uterus, cervix, or pelvic inlet.

The cord presented blue in color, indicating there was no blood getting to the baby from the mother. If this child was going to survive, it was imperative that something be done quickly. Relying on their training, Paramedic Pressley inserted her hand in the birth canal and alleviated pressure on the umbilical cord being caused by the baby moving down the birth canal. With her hand in place, the cord became pink and she felt a pulse. The medic crew were relieved to know the baby was now receiving blood. Having alleviated pressure on the umbilical cord, she could not remove her hand until directed by a physician to do so. Paramedic Bowman consulted with physicians at the Prince George’s Hospital Center and informed them of the severity of the situation, as well as alerted to prepare a delivery room. Immediately upon arriving at the hospital, the patient was assessed and without delay taken to Labor and Delivery. The physician determined that Pressley must accompany the patient into the Operating Room, where an emergency Cesarean Section would be performed. Her hand remained in place, keeping pressure off the umbilical cord until the baby was delivered. After a week in the hospital, the healthy baby girl, delivered at 36 weeks gestation, was discharged into the care of her parents.

For their performance on the scene of the aforementioned incident that resulted in saving the life of baby, Fire Fighter/Medic John A. Bowman and Fire Fighter/Medic Kacie E. Pressley were awarded a Fire/EMS Department Emergency Service Award.

In making the presentation, Fire Chief Marc S. Bashoor stated, "Congratulations and thank you for an outstanding job. Your actions reflect favorably on you, the Fire/EMS Department, and Prince George’s County Government as a whole.  I believe that this is the first time in the history of providing advanced life support in Prince George's  County that a paramedic had to join labor and delivery in the OR with an emergency C-section"

Posted by PGFD at 6:04 PM No comments: Links to this post

At about 7:30 am, Friday, April 26, firefighters and paramedics were alerted to a house fire with the dispatcher providing additional information that the County Police were on the scene dealing with a disorderly person. Police had been dispatched and arrived at the location after being dispatched for a domestic situation.
Police officers arrived to find that an 18-year-old male was involved in a domestic with other family members at his mother’s house. It is alleged that he physically removed his grandfather from the house, re-entered and intentionally set fire to the home’s interior and remained inside. Arriving police officers notified their dispatcher to alert the Fire Department and proceeded to use fire extinguishers from their cruisers in an attempt to knock down the fire located just inside a 1st floor window. The fire continued to grow in intensity and the officers were forced back from the intense heat and thick smoke now consuming that portion of the house. The teen appeared in a second floor window and with the heat and smoke surrounding him; he retreated to the roof just above where the fire was located. At some point the teen dispensed an unknown type of product down onto the police officers trying to coax him down. Fearing the product may be flammable the officers retreated a safe distance from the fire all the while continuing to try to talk the teen down off of the roof which was now on fire.

Firefighters from Oxon Hill arrived at 5609 Woodland Drive in the Forest Heights community to find the 2-story home with heavy fire and smoke showing from the first floor. The crews witnessed numerous police officers on the scene and a subject on the roof. Crews prepared themselves to advance hose lines into the house as the teen on the roof, now nearly invisible from the thick smoke, jumped to the ground and was immediately taken into custody.

After the scene appeared safe with the subject in custody, firefighters entered the structure and extinguished the fire within 15 to 20 minutes.

The male was transported to a hospital by paramedics for a mental and physical evaluation of any possible injuries and other medical conditions. No other civilian or firefighter injuries were reported.

Prince George’s County Fire Investigators are leading the investigation into this incident. The cause of the fire is incendiary with fire loss estimated at $80,000. An adult female, the teen’s mother, will be displaced and assisted by the County Citizen Services Unit and the American Red Cross.

Fire Investigators stated that charges against the 18-year-old male include 1st Degree Arson, 1st Degree Malicious Burning, 1st Degree Destruction of Property and 10 counts of 1st Degree Assault on a Police Officer. The Fire/EMS Department is not releasing the teens name because he was treated and transported and is protected by HIPAA and patient privacy laws.

The following video shows the burning home with the teen walking on the roof just prior to him jumping off and taken into custody.  It has been edited by the Fire/EMS Department to link 2 cell phone video clips together and to remove audio.  The cell phone video was obtained from public safety personnel documenting the unfolding scene. 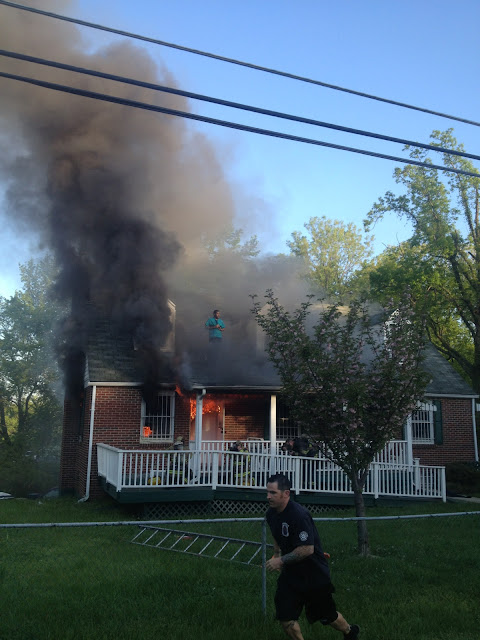 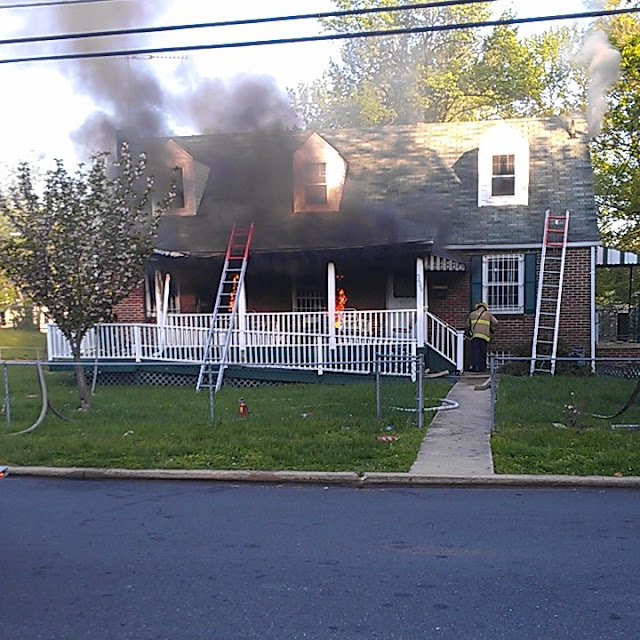 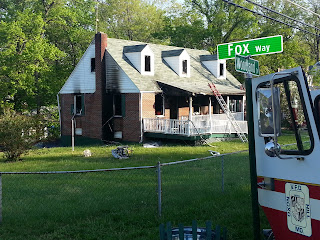 At about 7:30 am firefighters and paramedics were alerted for a house fire with police on the scene dealing with a disorderly person. Police had been dispatched to the house earlier for a domestic situation.

Firefighters from Oxon Hill arrived at 5609 Woodland Drive to find a 2 story home with fire showing from the first floor, reports of a male walking on the roof just above the fire and numerous police on the scene.

It was reported the suspect set the house on fire. Police Officers used fire extinguishers from their cruisers in an attempt to extinguish the fire but the fire was too far advanced to have any effect on the fire.

The male jumped from the roof to escape the intense heat and was immediatley taken into custody.

After the scene was declared safe with the subject in custody, firefighters entered the structu r e and extinguished the fire within 15 to 20 minutes. No injuries were reported.

The male was transported to a hospital for mental evaluation, treament for possible injuries and other medical conditions.

Fire Investigators are documenting the scene and will be charging the male with First Degree Arson, Malicious Destruction of Property, Assault on a Police Officer and other charges.

Additional information will be posted when availiable.

This E-mail and any of its attachments may contain Prince George's
County Government or Prince George's County 7th Judicial Circuit
Court proprietary information or Protected Health Information,
which is privileged and confidential. This E-mail is intended
solely for the use of the individual or entity to which it is
addressed. If you are not the intended recipient of this E-mail,
you are hereby notified that any dissemination, distribution,
copying, or action taken in relation to the contents of and
attachments to this E-mail is strictly prohibited by federal law
and may expose you to civil and/or criminal penalties. If you have
received this E-mail in error, please notify the sender immediately
and permanently delete the original and any copy of this E-mail and
any printout.

Posted by PGFD at 8:42 AM No comments: Links to this post