Members of the media are invited to attend this display.  County Executive Baker and Fire Chief Barksdale will make themselves available for comment during this event.

Examples of the apparatus on display include:

WHAT:            Fire/EMS apparatus display of units acquired during the Baker administration.

WHERE:          FedEx Field, Parking Lot at entrance to Gate H
Off of Garrett Morgan Boulevard

WHO:              County Executive Rushern L. Baker, Fire Chief Benjamin Barksdale and the men and women of the Fire/EMS Department.
Posted by PGFD at 4:48 PM No comments: Links to this post

On July 21, 2017,  the Prince George's County Fire/Emergency Medical Services Department will recognize the one year anniversary of Captain Hill’s line of duty death with the following ceremony:

1135 hours:
Time of death - moment of silence over all Fire/EMS radio channels.

There is no required uniform for the event.

Read previous story here.
Posted by PGFD at 12:40 PM No comments: Links to this post

The 2017 summer heat wave continues with high temperatures and humidity in Prince George’s County.  The men and women of your Fire/EMS Department want you to stay informed and take precautions to stay safe and healthy. Temperatures nearing 95 combined with humidity will create a dangerous situation primarily for children, the elderly, and those who suffer from chronic heart or lung conditions.  Dangers also are extended to anyone that are outdoors for extended periods of time and those involved in physical or strenuous activity.  The first heat wave of the season is always the hardest on our bodies as we have not yet acclimated to these temperatures

Your best protection is to stay well hydrated. Sweat, or water, allows heat to evaporate from your skin’s surface. If you become dehydrated, it is more difficult for your body to maintain an acceptable temperature. The best thing to drink is water. Gatorade or other sports drinks are also good. Avoid drinks containing alcohol or caffeine. Limit heavy exertion when high levels of heat and humidity are present. High humidity levels make it more difficult for your body to dissipate heat. 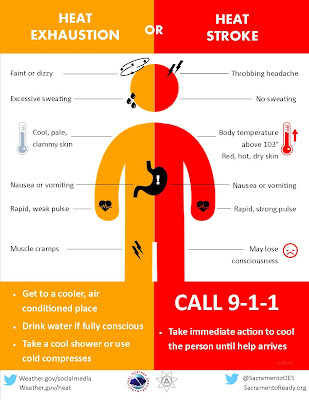 Heatstroke is a serious illness characterized by a body temperature greater than 105 degrees. Symptoms may include “dry” red skin, convulsions, disorientation, delirium and coma. Onset of heatstroke can be rapid: a person can go from feeling apparently well to a seriously ill condition within minutes. Your body has lost the ability to sweat and naturally “cool-off” – this is a true medical emergency.  Treatment of heatstroke involves the rapid lowering of body temperature, using a cool bath, bags of ice or wet towels. Place ice bags in each armpit, groin and back of the neck.  A heatstroke victim should be kept in a cool area; emergency medical care should be obtained by dialing 911.

Never leave anyone and pets inside a hot car, unattended and with no cool air relief.

• Make sure pets have access to water and shade
Posted by PGFD at 9:10 AM No comments: Links to this post

Critically Injured Crash Victim Thanks Firefighter/Medics "Angels in My Path"

Before sunrise on an October morning in Laurel two Prince George’s County Firefighter/Medics were driving separately on their way to work.  They had no idea what they were about to witness in addition to quick thinking and actions would help to save a young mans life.  The very man they helped that morning visited the Laurel Fire/EMS Station this afternoon to thank them and others firefighters that responded to help.

Firefighter/Medics Damion R. Duncan and Michael R. Dugan were travelling in the area of Route 198 and Interstate 95 in Laurel.  Duncan on his way to Laurel Fire/EMS Station 810 and Duncan on his way to Laurel Fire/EMS Station 849 when they witnessed a vehicle, for whatever reason, cross the median strip on Route 198, go airborne, leave the roadway and broadsiding a large tree.  Both firefighters stopped to provide assistance with Dugan alerting 911 of the incident with an occupant trapped with life threatening injuries.  Both firefighters worked to keep the victims airway open and treat his injuries until assistance arrived.  Both firefighters knew that time was of the essence if this young man was going to survive.

With the morning darkness and lack of other vehicles on the road it is quite possible that if this crash was not witnessed by the two firefighters it may have gone unnoticed due to its out-of-sight location off the roadway.

Additional firefighters and medics arrived from the nearby stations and initiated extricating the adult male and arranging transportation by helicopter to a Trauma Center.  The victim,  23 years-of-age, a West Laurel resident and graduate of Laurel High School, was suffering from a head trauma and bi-lateral fractures of his femurs in addition to other multiple injuries.

As is the case with the majority of patients the treatment and transport would be the last contact personnel would have.  However, Juan Morales was determined to survive and once released from months in the hospital and rehab, he wanted to meet and thank his rescuers.  Morales reviewed the police report of his crash and located the names and phone numbers of the firefighters.  They were listed on the report as they had witnessed the crash.  Still recovering with mobility and speech he asked his girlfriend to contact the firefighters and arrange a visit.

Morales accompanied by his girlfriend, mother and other relatives visited the Laurel Fire/EMS Station 810 this Friday afternoon, July 14, to meet the firefighters.  They brought along a plaque and lunch for the entire crew.  On the appreciation plaque presented to firefighters Morales referred to them as, "The Angels in My Path."

Morales still uses a wheelchair and attends physical, occupational and speech therapy.  He spoke in a low and raspy voice thanking the firefighters for everything they did that morning and how much he appreciated their help.  He greeted each firefighter that was able to attend today's informal meet and greet and asked questions about that morning.  He does not remember any events of that morning and asked Duncan and Dugan details about what had occurred.  Each firefighter discussed details of the crash that Morales had never heard before.

It is well known in the arena of public safety that awards are nice but there is nothing better than to meet a former patient that you never thought you would ever see again.  That is the best award to receive.

This is a list of personnel on the incident: 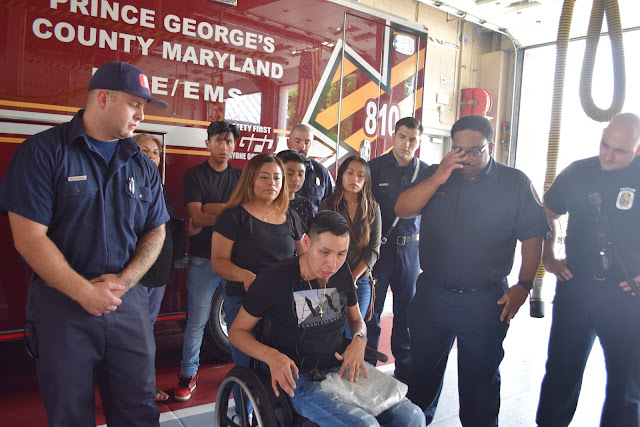 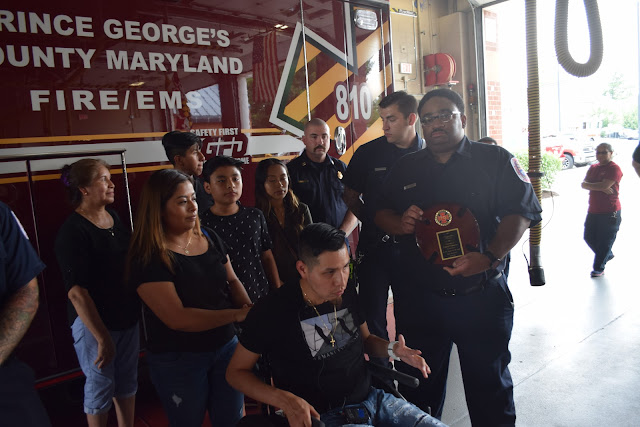 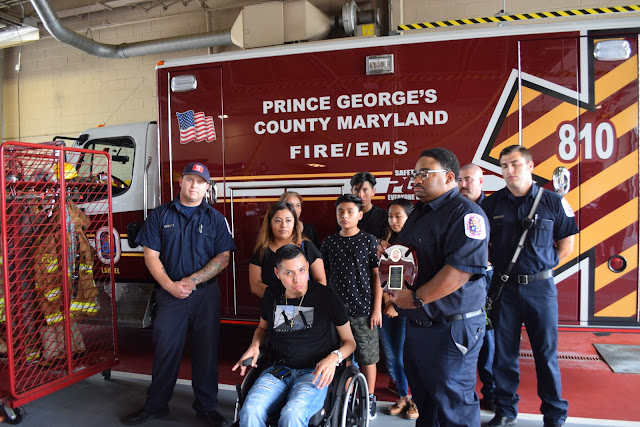 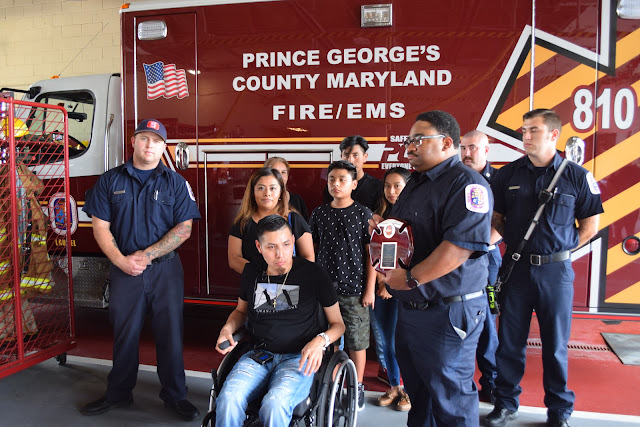 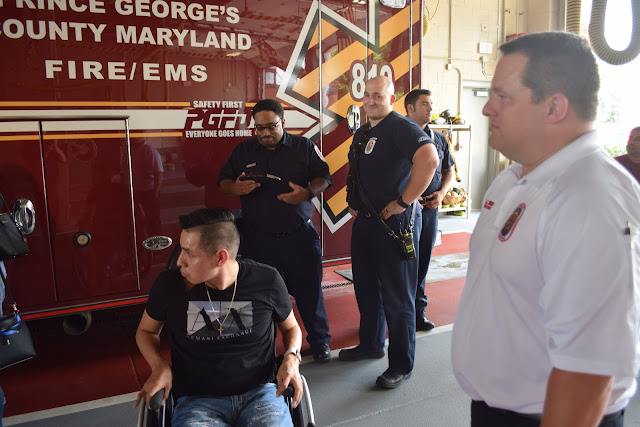 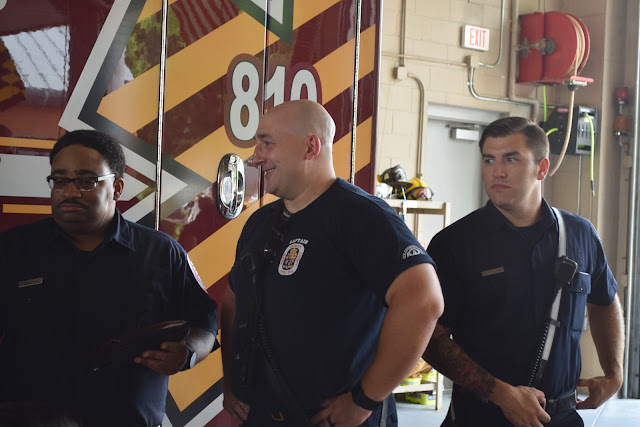 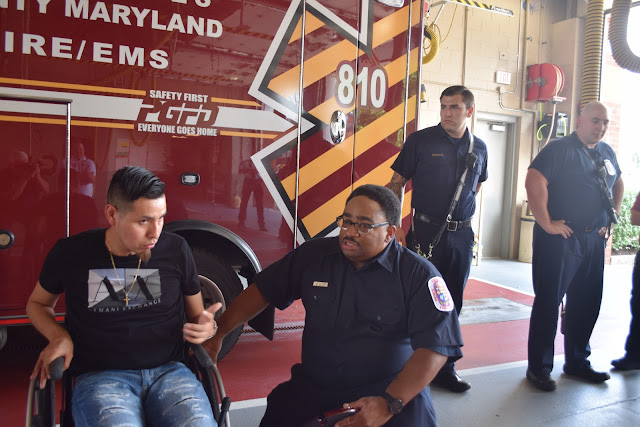 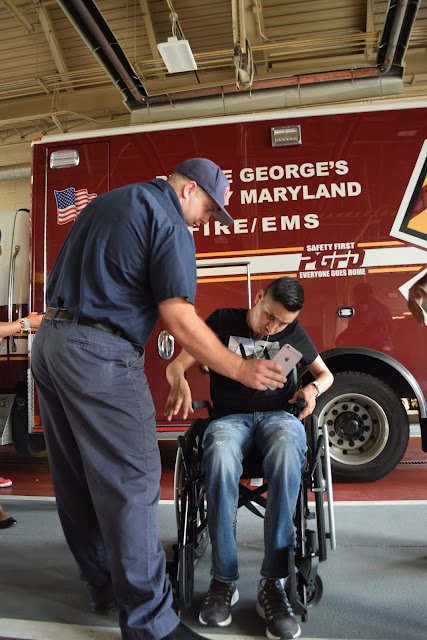 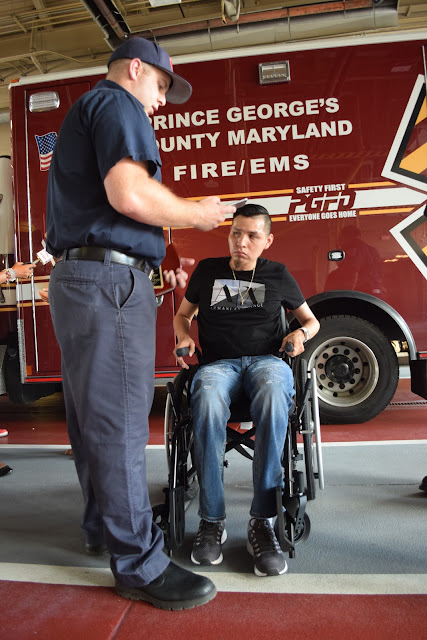 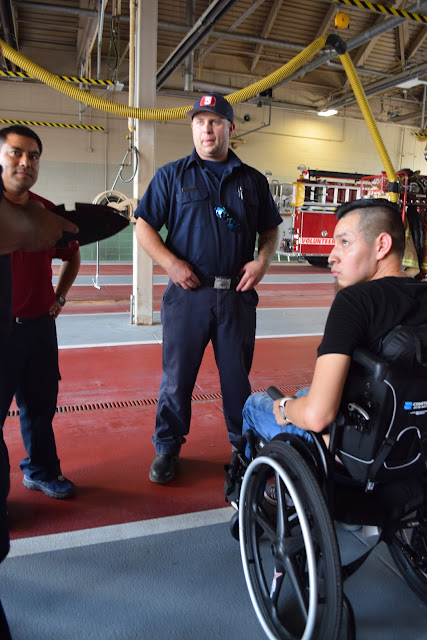 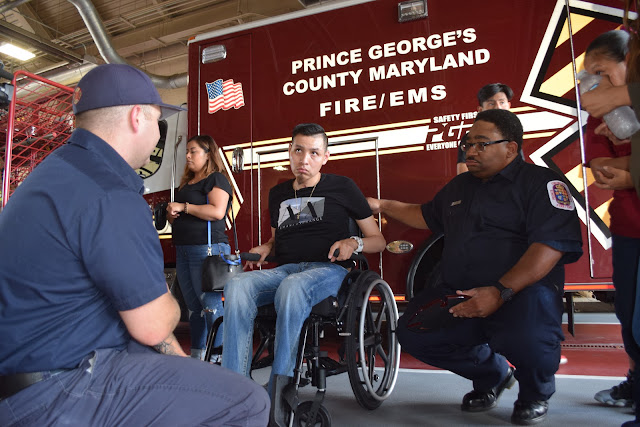 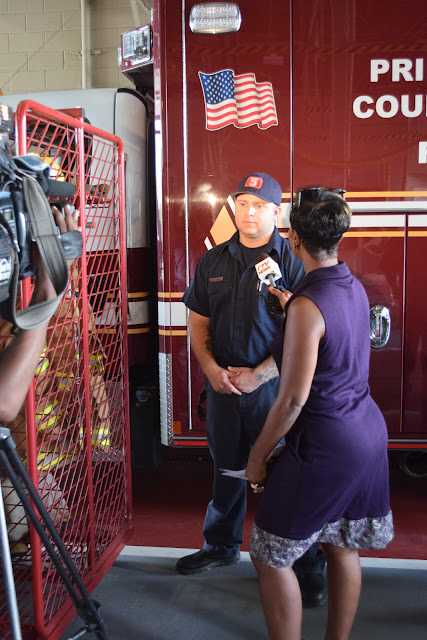 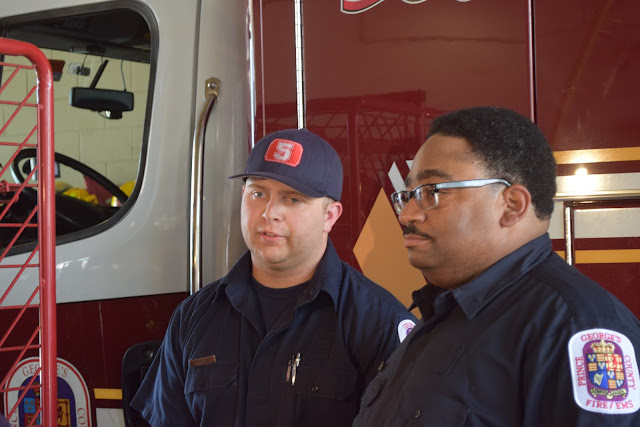 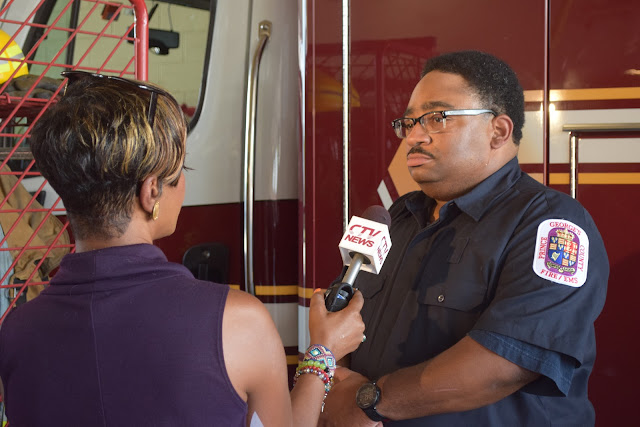 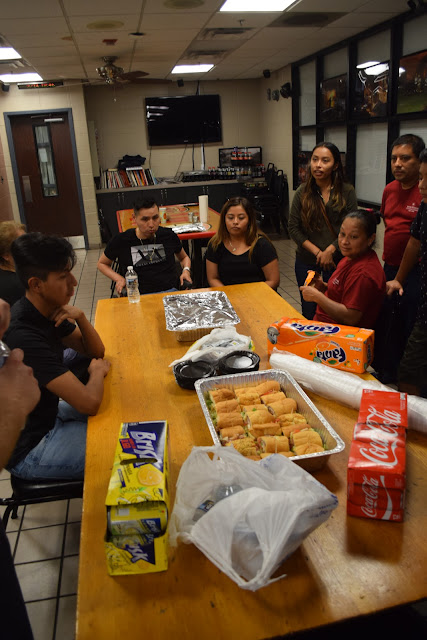 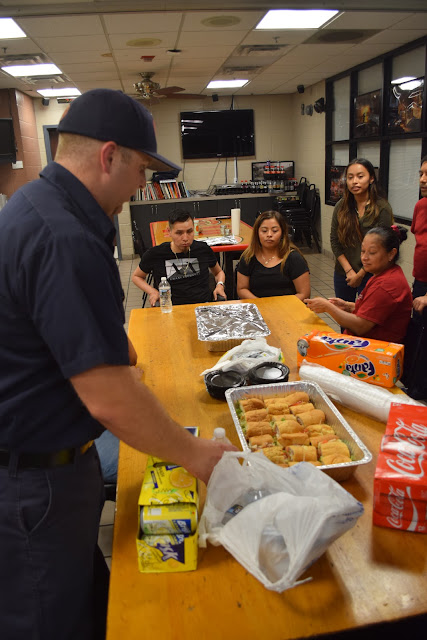 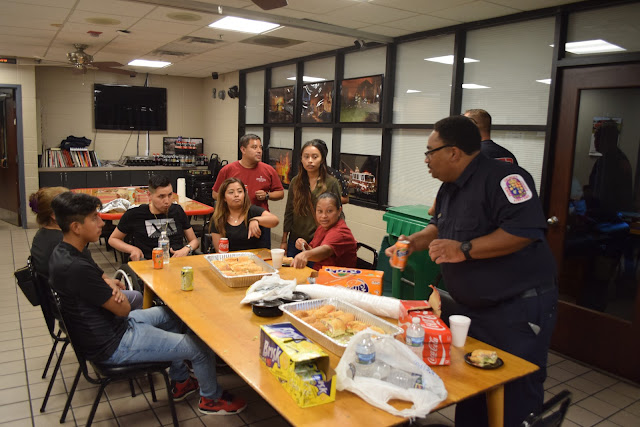 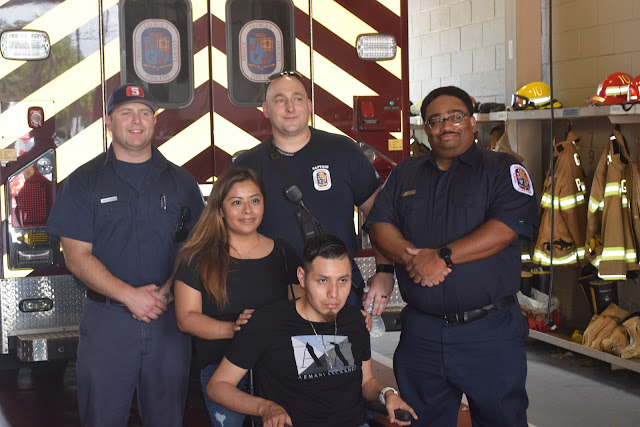 Posted by PGFD at 5:07 PM No comments: Links to this post