Halloween Was Anything but Scary for Firefighters

"TRICK OR TREAT - WE WANT TO HEAR BEEP-BEEP-BEEP" 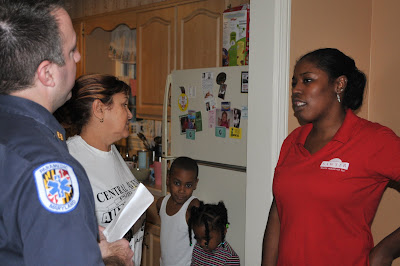 The Tavarez family of Beltsville received coupons for popcorn and a soda after their smoke alarm was found to be in working condition. 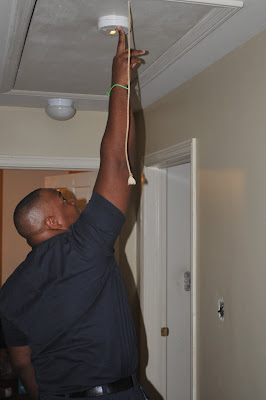 Fire Fighter/Medic Anthony Kittrell from the Calverton Fire/EMS Station tests a smoke alarm in the Tavarez home. The alarm sounded beep-beep-beep and the family received coupons for popcorn and soda at AMC movie theatre.

Firefighters across Prince George’s County went trick-or-treating on Saturday, October 31, 2009. They were not seeking any sweet treats as they went door-to-door, they were seeking working smoke alarms and reminding community residents that when they changed their clock – to remember to change the battery in their smoke and CO alarms as well.

Several donations made this effort possible; PEPCO provided smoke alarms to be distributed throughout the community, ENERGIZER provided fresh batteries and AMC movie theatres provided coupons for complimentary popcorn and soda. This public-private partnership enabled firefighters to pronounce, “Trick or Treat – we want to hear beep-beep-beep,” while visiting homes on Halloween evening. When the home smoke alarm was tested and worked – the homeowner got the treat – free popcorn and soda from AMC movie theatres. If an alarm was tested and not working, firefighters would provide fresh batteries or a new smoke alarm.

Dozens of homes were visited by firefighters during the 6:00 PM hour on Halloween. Homes that displayed Halloween decorations and had their welcome lights on were targeted for visits. An overwhelming high percentage, 90%, of homes visited had smoke alarms that worked. Dozens of free popcorn and soda coupons were quickly dispensed as a correlation was noted by firefighters that homes taking the time to decorate and participate in Halloween events also had taken the time to ensure they had working smoke alarms. Previous neighborhood visits normally yield about a 50% compliance with working smoke alarms compared to our “Halloween Trick or Treat – we want to hear beep-beep-beep” campaign yielded 90% compliance.

Prince George’s County Fire Chief Eugene A. Jones stated, “I want to thank and acknowledge the community contribution of Yuni Melak of the Calverton AMC-Center Park 8 theatre for donating the popcorn and soda coupons, PEPCO for the smoke alarms and ENERGIZER for the fresh batteries that made this campaign a success. I encourage everyone to install, inspect and protect their homes and loved ones by installing and maintaining smoke alarms and residential fire sprinklers, practicing home escape plans and performing a home safety walk-through to remove fire hazards from the home.”

All Prince George’s County citizens and residents can receive a smoke alarm installed in their home and fresh batteries, free of charge, by contacting the Fire/EMS Departments Livable Communities Smoke Alarm Hotline at 301-864-SAFE (7233).
Posted by PGFD at 1:55 PM No comments: Links to this post