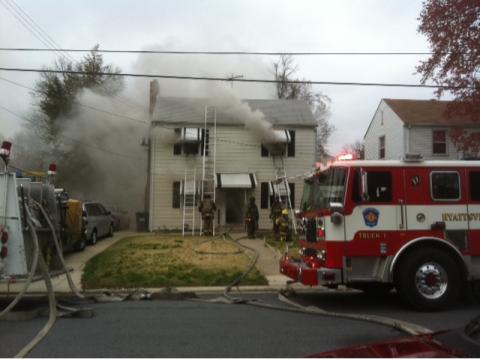 MEDIA CONTACT: Mark E. Brady, Chief Spokesperson, 240-508-7930
A family will be temporarily displaced after a fire damaged their Hyattsville home this afternoon.
Just after 3:30 pm, Saturday, April 9, 2011, firefighters were alerted via 911 callers of a possible house fire. Fire/EMS units arrived within minutes at a 2-story single family home in the 2000 block of Rittenhouse Street to find a working fire on the first floor.

First arriving units from Chillum and Hyattsville worked together to extinguish the fire and search for any occupants. All searches were negative and the fire in a first floor utility room was quickly contained and extinguished.

No injuries were reported. The cause of the fire is under investigation and a preliminary fire loss is estimated at $25,000.

Acting Fire Chief Marc Bashoor was near the location when the call was dispatched and arrived shortly after command had been established. He used the opportunity to observe operations and commended the crews for an effective and efficient operation.

A family of five, 4 adults and 1 child, will be displaced and assisted with temporary shelter by the Department's Citizen Services Unit and the Red Cross.

Attached photo by Marc S. Bashoor.
Posted by PGFD at 7:17 PM No comments: Links to this post 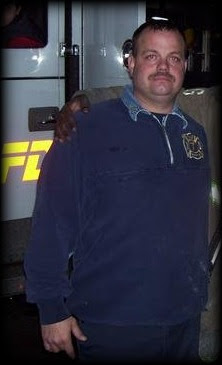 Fire Chief Charles "Chucky" Ryan of the Riverdale Volunteer Fire Department was critically injured while battling a house fire while working as a firefighter with the District of Columbia Fire Department (DCFD) on Friday, April 8, 2011 (DCFD Press Release is below).  As of this morning he remains listed in "critical" condition.

Ryan has been in the constant company of family, friends and fellow firefighters from the DCFD, PGFD and volunteer members of his Riverdale Station.  He is under the very best of care with the staff of the Burn Unit of the Washington Hospital Center.  He remains listed in critical condition as he begins to recover from burns over 40% of his body.

Being a veteran firefighter, Ryan demonstrated the difference between life and death; he was described as being very deliberate in maintaining his face piece in place.  A firefighters face piece provides fresh breathing air and thermal protection to their face and airway.  By doing so Ryan prevented the superheated gases and toxic air from entering his airway which would have complicated and more then likely prevented a recovery of his injuries.

Medical reports and diagnosis have been favorable for Ryan's recovery.  Hospital staff stated the burn injuries sustained by Chuck Ryan are "survivable," however, his path to recovery will be long and painful and at this point his stay in the Burn Unit will be measured by "weeks."

Acting Fire Chief Marc S. Bashoor has been in contact with DCFD Fire Chief Ellerbe and with the volunteer leadership at the Riverdale Station.  Bashoor has extended whatever resources are needed to assist each Department through this period.  Chief Bashoor has urged everyone to keep Volunteer Chief Ryan and the other injured firefighters in their thoughts and prayers through this very challenging time.  With so many members of the fire service family wanting to contribute in some way, it has been recommended that a blood donation be considered.   Potential donors are encouraged to contact the Blood Services Center located in the lobby of the Washington Hospital Center.

Moments later additional crews arrived on the scene, including Rescue Squad 3 (RS-3 - Anacostia) whose crew began a systematic search for other occupants. While the first arriving engine crew made an aggressive attack on the fire, another engine crew protected a nearby exposure building. Within minutes a partial collapse of the roof occurred forcing heat and debris on top of the search crew. Another crew from Truck 13 (T-13 – Trinidad) recognized this and called for assistance. Firefighters activated an emergency call followed by a 'Mayday'.

Two of these firefighters self-rescued and the 3rd was assisted by the 'rapid intervention team' (RIT). A 4th firefighter was injured during the rescue and firefight.

Emergency medical services personnel treated the injured firefighters. One firefighter was listed as Priority 1, serious and life-threatening, while the other three were considered Priority 2, serious & non life threatening. All have burns of varying degrees. All were transported to the Washington Hospital Center, MedStar Burn Unit.  The most seriously inured firefighter is in critical condition, three others are being admitted to the Burn Unit with varying degrees of burns, while another was treated and released.
The injured firefighters are: Firefighter Warren Deavers, RS-3, Lieutenant  Robert Alverado, T-13, Firefighter Ramon Hounshell, RS-3
Firefighter Charles Ryan, RS-3 and Firefighter Theodore Douglas (E-10, T-4)

Neighbors indicated the house is vacant, but was sometimes occupied for one reason or another. The cause of the fire is under investigation.  Fire Investigators believe the area of origin was to the rear interior of the house. The house suffered significant damage and is a total loss, estimated to be approximately $150,000.