Today is October 1, 2015, the "Safety First Day of the Month."  Having a working smoke and carbon monoxide (CO) alarm could be the difference in life or death - yours and your family.  Today is the day that the Prince George's County Fire/Emergency Medical Services (EMS) Department has designated for everyone to test their smoke and CO alarms.  It's simple:

Press the TEST button on the front cover of your smoke and CO alarm.

An audible beeping noise SHOULD sound.  If it does, congratulations, your done until next month.

If it does not sound an audible alarm - replace the battery.  Push the TEST button again - still no alarm - remove the alarm and immediately replace with a new 10-year, tamper proof, with hush feature smoke or CO alarm or better yet a 10-year combination smoke/CO alarm.

If your alarms are at about 10 years old or you don't remember if you ever replaced the alarm, do it today!!!  Smoke and CO alarms work all day - every day and will wear down over their 10 year service life.

County Law requires a working smoke alarm in your home.  Over the next two years the law will continue to evolve to require a working 10-year smoke alarm on every level of your home, primarily outside of sleeping areas.

County Law currently requires a working CO detector on every level of your home, primarily, outside of sleeping areas.  This law includes all homes with a gas service (natural, propane, oil, etc), a fireplace or an attached garage.  This law also requires that all hotels, motels, dormitories and all apartments and condos have working CO alarms.

Have you ever noticed that it is sometimes a challenge to reach your alarms installed on your ceiling or high on the wall.  Perhaps you use a step-ladder or stand tall on your toes to reach the test button.  Think about your senior citizen neighbors and relatives that may have difficulty even reaching a light switch.  Test their alarms for them every month, change their batteries at least once-a-year and contact 311 for them if they need a new 10-year smoke alarm installed by firefighters, free of charge.

Don't wait for a firefighter to knock on your door.  If you need a working smoke alarm and can not afford to purchase one, call 311 and ask about the free smoke alarm program.

While members of the Prince George's County Fire/EMS Department promote fire prevention year round, October is the month we provide extra emphasis.  Fire Prevention Week is in the month of October as well.  This years theme is; "Hear the Beep Where You Sleep." 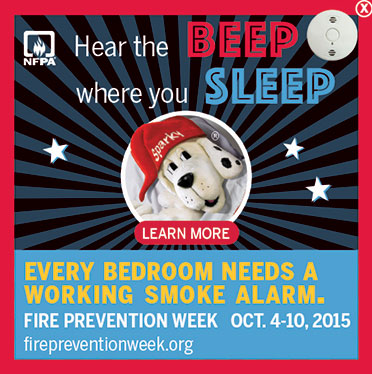 Keep your family safe with a working smoke alarm in every bedroom.

Did you know that roughly half of home fire deaths result from fires reported between 11 p.m. and 7 a.m., when most people are asleep?
Smoke alarms save lives. If there is a fire in your home, smoke spreads fast and you need smoke alarms to give you time to get out. In fact, having a working smoke alarm cuts the chances of dying in a reported fire in half!

The Fire/EMS Department, in cooperation with the Prince George's Sentinel and the First Tee Golf Program, are holding a Fire Prevention Poster Contest.  Read this article for additional details.

The Prince George’s County Fire Department and The Prince George’s Sentinel are teaming up to ask county residents to install smoke alarms in their homes in recognition of Fire Prevention Week.
This year the fire department will recognize Fire Prevention Week from Oct. 4 through 10, with a theme of “Hear the beep where you sleep.”
Fire Prevention Week was established to commemorate the Great Chicago Fire, a notorious blaze that killed more than 250 people, left 100,000 homeless, destroyed more than 17,400 structures, and burned more than 2,000 acres on Oct. 8 and 9 in 1871. Forty years after the Great Chicago Fire, the Fire Marshals Association of North America (today known as the International Fire Marshals Association), decided that the anniversary should be used as an occasion to raise awareness about the importance of fire prevention.
“It’s required in Prince George's County to have a smoke alarm on each floor of your house, as well as in the basement and attic area,” said Mark Brady, spokesman for the Prince George’s County Fire Department. “If a resident of Prince George's County is in need a smoke alarm, the county will provide a free one.”
According to the United States Fire Administration, each year there are an estimated 405,000 fires in residential structures, which cause nearly 3,600 fatalities, 18,600 injuries, and $4.7 billion in property loss.
According to the fire department, there have been several fires this year in Prince George's County where smoke alarms have saved residents’ lives.
"This year there has been 24 house fires where county residents have been saved by smoke alarms,” said Brady. "Last year in 2014, there were 36 house fires where smoke alarms alerted residents of a fire and they were able to get out safely.”
To help spread the word regarding smoke alarms, The Sentinel and the fire department will sponsor a poster contest for elementary school students in Prince George’s County. Students may design a poster depicting how fire alarms save lives, or demonstrate an example of a fire safety plan for their home and where to place smoke detectors.
Students may submit their contest entries at their local fire house or by emailing The Sentinel at editor-pg@thesentinel.com between Sept. 30 and Oct. 10. The winner will have their photo in the paper and will receive a one-year membership at the First Tee Program.
The First Tee of Prince George’s County offers golf programs and instruction, which focus on developing life skills using the game as its vehicle. The First Tee of Prince George’s Chapter was established in 2001 and is operated by the Maryland-National Capital Park and Planning Commission (M-NCPPC) and the Department of Parks and Recreation. This award is provided courtesy of the Chapter at the Paint Branch Golf Complex in College Park.
Posters will be judged by Prince George's County Fire Department officials and The Sentinel.
Several Prince George's County Volunteer Fire Departments will be holding fire prevention open-house programs. The Branchville Volunteer Fire Department at 4905 Branchville Road in College Park will host theirs on Oct. 11 from 11 a.m. to 3 p.m. Free fire trucks rides and other actives will take place.
In November it's "Change Your Clock - Change Your Battery or Change Your Entire Alarm" to a 10-Year Model!!!!

Posted by PGFD at 3:10 PM No comments: Links to this post

An approaching storm, Joaquin, is approaching and forecasted to impact our weather over this week and weekend.  Regardless of where it makes landfall the storm will bring heavy rains and high winds.  Driving conditions will be treaties and we advise to limit your driving and curtail all driving during periods of adverse weather.

To prepare yourself before the storm rolls into the County, heed this PGFD Safety Advice.

Please become familiar with what a Flash Flood is and advice to stay safe.