UPPER MARLBORO, MD, October 12, 2016 - Today, the Prince George’s County Fire/EMS Department (PGFD) joined the PulsePoint Foundation and CTIA Wireless Foundation to bring life-saving technology to the county via the PulsePoint Respond app. At an event at the Prince George's Sports & Learning Complex in Landover, County Executive Rushern Baker was joined by PGFD Fire Chief Marc Bashoor, and CTIA Wireless Foundation Executive Director Athena Polydorou highlighting the benefits of this mobile app that alerts CPR-trained citizens of cardiac events in their vicinity so they may administer aid.

The app also notifies users of the closest available Automated External Defibrillator (AED). Early application of bystander CPR and rapid defibrillation from an AED have proven to be crucial in improving a person’s chance of surviving SCA. PulsePoint is not limited to emergency responders or those with official CPR certification. It can be used by anyone who has been trained in CPR.

“We are proud to be the first Fire/EMS Department in the NCR to implement PulsePoint, said Fire Chief Marc Bashoor.  “It gives our residents and visitors and the ability to know when a cardiac arrest is occurring close by, to respond quickly, and to attempt potentially lifesaving CPR while our paramedics travel to the scene.”

The PulsePoint app also provides users with a display of PGFD’s active and recent incidents countywide. On average, PGFD responds to 400 daily calls for service; more than 80 percent are for emergency medical services.

“By directly alerting those who are qualified and nearby, maybe in the business next door or on the floor above, PulsePoint is able to put the right people in the right place at the right time,” said Richard Price, President of the California-based 501(c)(3) nonprofit PulsePoint Foundation.

The latest AHA guidelines, published in Circulation, state that such community programs could increase bystander CPR to the roughly 326,000 cardiac arrests that happen outside the hospital each year.

“By connecting those in critical need with CPR-trained individuals, the PulsePoint app is saving lives across America. We’re proud to be a key sponsor of PulsePoint so that Prince George’s County residents will benefit from this inventive app that leverages Americans’ mobile-first lifestyles,” said Athena Polydorou, Executive Director of CTIA Wireless Foundation.

The free PulsePoint app is available for iPhone and Android and can be downloaded from the iTunes Store and Google Play.

About the PulsePoint Foundation
PulsePoint is a 501(c)(3) non-profit foundation based in the San Francisco Bay Area. Through the use of location-aware mobile devices PulsePoint is building applications that work with local public safety agencies to improve communications with citizens, empowering them to help reduce the millions of annual deaths from sudden cardiac arrest (SCA). Deployment of the PulsePoint app can significantly strengthen the “chain of survival” by improving bystander response to cardiac arrest victims and increasing the chance that lifesaving steps will be taken prior to the arrival of emergency medical services (EMS). PulsePoint is built and maintained by volunteer engineers at Workday and distributed by our marketing and implementation partner Physio-Control, Inc. CTIA Wireless Foundation is a key sponsor and advocate of PulsePoint, providing industry and financial support. Learn more at www.pulsepoint.org or join the conversation at Facebook and Twitter. The free app is available for download on iTunes and Google Play.
About CTIA Wireless Foundation
CTIAWireless Foundation is a 501(c)(3) nonprofit dedicated to developing and supporting initiatives that use wireless technology to help American communities. The Foundation’s innovative programs benefit consumers in areas such as education, healthcare, safety and the environment. The Foundation was formed by CTIA-The Wireless Association® member companies in 1991. Learn more at www.wirelessfoundation.org.

About Sudden Cardiac Arrest
Although a heart attack can lead to sudden cardiac arrest (SCA), the two are not the same. SCA is when the heart malfunctions and suddenly stops beating unexpectedly, whereas a heart attack is when blood flow to the heart is blocked, but the heart continues to beat. Each year, more than 420,000 out-of-hospital cardiac arrests occur, making it the leading cause of death in the United States. Survival rates nationally for SCA are less than eight percent, but delivery of CPR can sustain life until paramedics arrive by maintaining vital blood flow to the heart and brain. However, only about a third of SCA victims receive bystander CPR. Without CPR, brain damage or death can occur in minutes. The average EMS response time is nine minutes, even in urban settings; after 10 minutes there is little chance of successful resuscitation. The American Heart Association estimates that effective bystander CPR, provided immediately after SCA, can double or triple a person’s chance of survival. 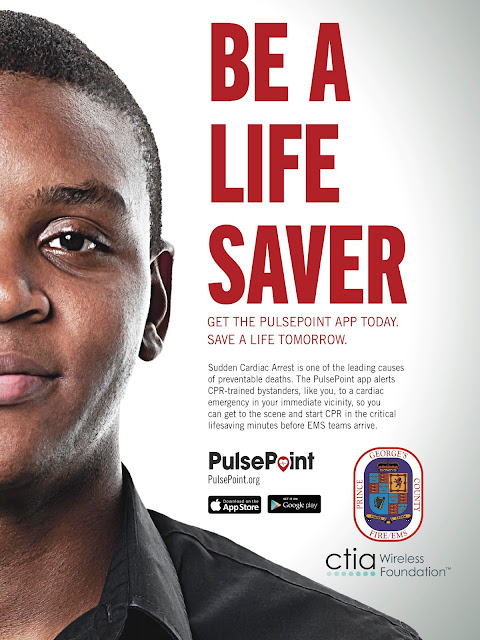 Posted by PGFD at 11:00 AM No comments: Links to this post