MEDIA CONTACT: Mark E. Brady, Chief Spokesperson, 240-508-7930
At about 8:30 pm, Tuesday, June 7, 2011, Prince George's County Firefighters and Paramedics from the New Carrollton area were alerted to an apartment building fire in the Southern Walk apartment complex.
Three City of New Carrollton Police Officers were on assignment in the area when a citizen flagged them down and reported the fire. The three officers immediately responded a short distance to the scene and reported the fire to their dispatcher. They entered the building and started to alert residents, unaware of the fire, to get out. Unable to advance beyond the second floor landing they evacuated themselves and started to assist residents outside.

Firefighters from West Lanham Hills arrived at 5328 85th Avenue, a 3-story in the front/4-story in the rear apartment building, and reported heavy fire showing from the second level rear side. Residents on upper floors were unable to escape through the interior stairwell due to high heat and thick smoke and retreated to balconies and windows and yelled for help. An EMS Task Force and a Second Alarm were sounded bringing additional resources to the scene.

The fire extended through the upper floors and eventually into the roof before it was brought under control. It required 40 minutes to do so.

An adult female with an infant were rescued from a top floor bedroom window by a volunteer firefighter from Kentland Fire/EMS Station 833 using a ground ladder. The pair were handed over to paramedics and deemed to be not injured. Firefighters effected the rescues of six other residents from the upper floor balconies using ground ladders.


There were nearly 100 firefighters, paramedics, EMT's and support staff that responded on 40 pieces of apparatus.

Four residents were transported to area hospitals with minor illnesses or injuries. Ten additional residents were evaluated and treated on the scene but did not require hospitalization.
Sixty families from four apartment buildings, approximately 120 residents, will be displaced. Two buildings damaged by the fire, two others because utilities have been shut off. The County Citizen Services Unit and the Red Cross will be assisting those displaced.

The cause of the fire remains under investigation. Fire loss is still being tabulated.
Posted by PGFD at 11:05 PM No comments: Links to this post

Prince George's County Acting Fire Chief Marc S. Bashoor and numerous members of the County Volunteer Fire and Rescue Association attended the Maryland Fire-Rescue Services Memorial Program in Annapolis on Sunday, June 5, 2011. The solemn ceremony is an opportunity to recognize and remember the sacrifice of those that have paid the ultimate price with their life. Lutherville VFD member Mark Falkenham was the lone member added to the State Memorial for 2011.
(Photos by Teresa Ann Crisman) 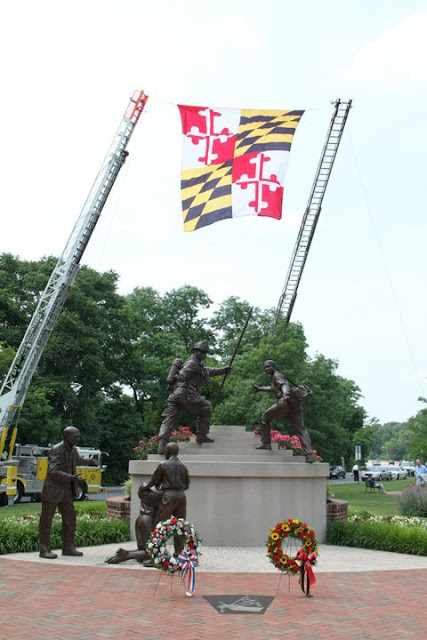 Posted by PGFD at 12:13 PM No comments: Links to this post

MEDIA CONTACT: Mark E. Brady, Chief Spokesperson, 240-508-7930, mebrady@co.pg.md.us
Story and Photos (unless otherwise noted) by Mark E. Brady
The Kenny Chesney/Zac Brown Band summer concert tour took the stage at FedEx Field on Saturday, June 4, 2011.  There were about 54,000 people attending the concert that featured four acts.  On this tour, titled “Goin’ Coastal,” singers Uncle Kracker and Billy Currington perform early evening warm-ups; and, at stadiums like FedEx, the Zac Brown Band co-headlines with Chesney.
FedEx Field, home to the NFL’s Washington Redskins, is located in Landover, Maryland, in Prince George’s County.  The Fire/Emergency Medical Services (EMS) Department (PGFD) provides public safety services during stadium events on a contracted agreement, and about 60 firefighter/medics and command staff were on-duty for the concert.
The Fire/EMS Department “Special Events” unit plans and coordinates a variety of projects, including stadium events.  The unit is under the leadership of Major Adon Snyder, commander of Technical Services, which is a division of the Special Operations Command led by Lt. Colonel Scott K. Hoglander.  In addition to the Special Events unit, Technical Services also coordinates the Fire/EMS Department’s Hazardous Materials, Technical Rescue Team, and Water Rescue that includes the Lawrence Woltz Fire Boat.
Planning begins weeks before an event occurs and includes several meetings with the operations staff at Fed Ex Field, event producers and other agencies that will work the event.  Resources such as transport units (ambulances), specially modified golf carts for EMS services, and required equipment—advanced and basic life support equipment—are stored and maintained by Fire Fighter/Medic Technician Jamison Scarlata.  Scarlata also schedules all training and staffing for events.  When events occur at FedEx Field, the swell of attendance rises to become the second largest city in the state.  Appropriate resources are required to meet the needs of attendees, production crews and talent.  Services at FedEx Field were designed and staffed so as not to affect services normally provided to the citizens and residents in nearby communities.  Public safety at Fed Ex Field is designed to be self-sufficient.
Personnel who work stadium events are required to take training that familiarizes them with the layout of the stadium “footprint” that includes the parking lots and interior layout.  Training also consists of equipment familiarization and how to remove a patient from the upper bowl of the stadium that requires the services of the high-angle team.
Personnel arrive at an off-site location about five hours before an event is scheduled to begin and start the check-in process.  This involves signing in, receiving unit assignments, obtaining credentials, and radio and equipment for the assigned units.  In addition to personnel providing fire and EMS, there is also staff providing services for hazardous materials, inspections and prevention, logistics, transportation, and incident command.
Members of the Department’s Bomb Squad arrive on-site at earlier times and conduct sweeps of the stadium, with assistance from the County Police and Maryland State Police.
Once Fire/EMS apparatus and equipment are prepped, everyone drives to the stadium and takes appropriate positions inside and outside of the stadium.  A meeting of all personnel is held 30 minutes prior to the gates opening. This meeting covers all aspects of the event, including reports from supervisors responsible for fire, EMS, bomb squad, inspections, and incident commanders.  Assignments are reviewed and verified.  Once the meeting concludes all personnel deploy to their respective areas of responsibility, which are on various levels of the stadium, first-aid rooms, field level, parking lots, and the triage room.
The weather for Saturday, June 4, 2011, was perfect for an outdoor event, mostly sunny with temperatures in the mid 80’s and low humidity.  The parking lots opened at 12:30 p.m., with tailgate parties commencing as soon as vehicles parked.  Stadium gates opened at 3:00 p.m., and the first act, Uncle Kracker, started at 4:30 pm.  The event timeline was orchestrated nearly perfectly, with each performer taking the stage at their scheduled time.  The second performer, Billy Currington, performed from 5:15 p.m. until just after 6:00 p.m., and Zac Brown Band took the stage at 6:25 p.m. until just before 8:00 p.m.  The main event, Kenny Chesney, opened about 8:20 p.m. until curtains at about 11:00 p.m.

Activity level for the Fire/EMS Department started out slow, with some incidence of sick or injured persons in the parking lot prior to the gates opening. The majority of the early afternoon was spent standing-by at assigned locations and monitoring crowds while providing whatever assistance possible to attendees. As the afternoon and evening wore on, the number of incidents increased. By sunset, a slow stream of concertgoers visited first-aid stations with minor ailments, as well as fans in the stadium calling for assistance for various reasons. There were about fifty incidents handled by firefighter/medics, including minor injuries, alcohol related illness, chest pains and head injuries. The brunt of the fire/EMS services was utilized at the conclusion of the long day’s activities, when many people were at the end of a very long day. A small percentage of patients treated were transported to the hospital.


After everyone had departed the stadium parking lots and all incidents were handled, firefighter/medics completed paperwork and EMS reports and returned equipment and apparatus to the off-site facility well into early Sunday morning. This brought to an end to a long day of providing the very best in fire protection and emergency medical services possible to the citizens, residents and visitors “Goin’ Coastal” in Prince George’s County, Maryland. 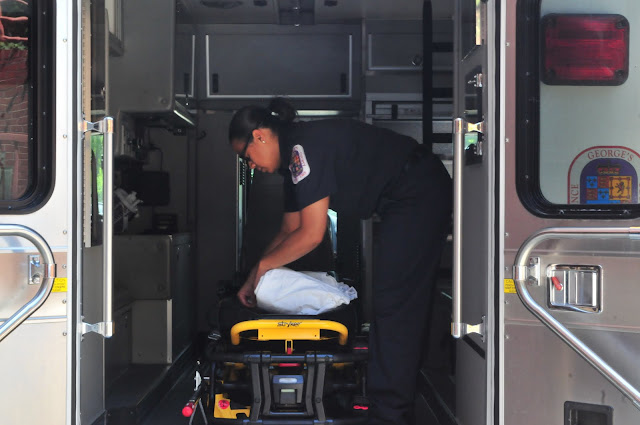 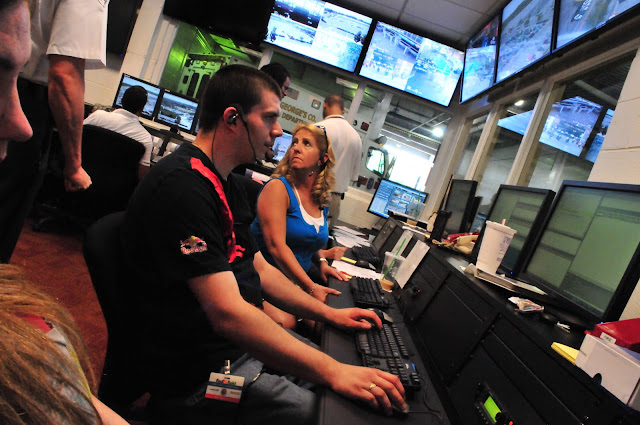 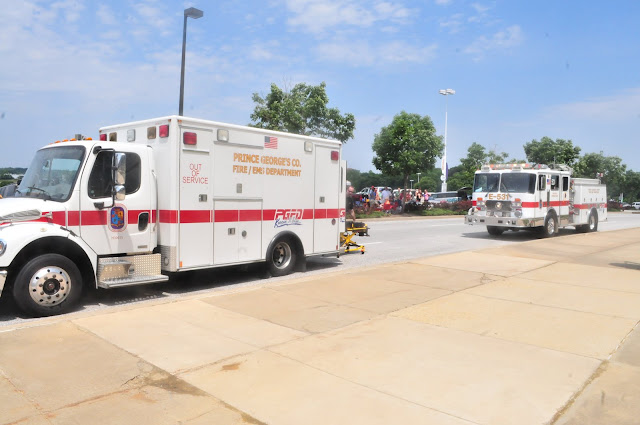 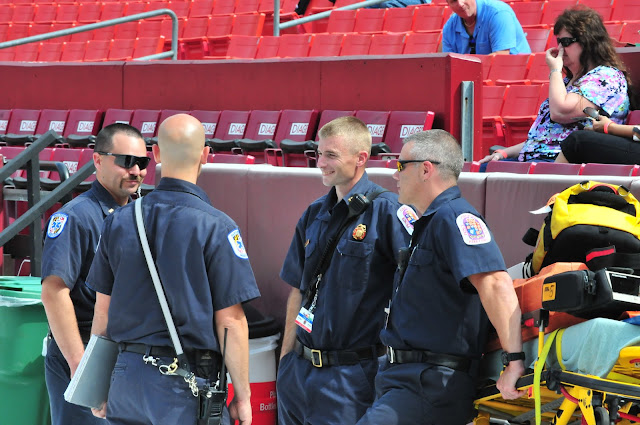 Posted by PGFD at 9:06 AM No comments: Links to this post