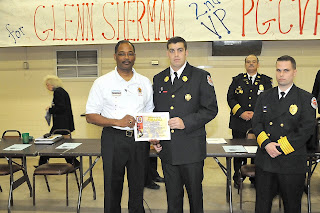 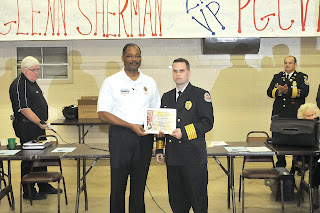 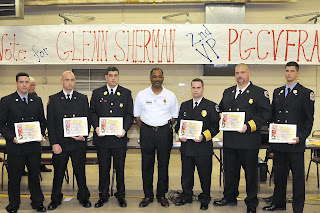 Several members of the Prince George’s County Fire/EMS Department are being recognized with Emergency Services Awards for their actions while saving the life of Fire Fighter/Medic Daniel McGown. Seven awards were presented to members of the Kentland Volunteer Fire Department during a meeting at the 2009 Annual Prince George’s County Volunteer Fire and Rescue Association Convention held in Accokeek. Three paramedics that provided pre-hospital care to McGown are slated to receive their awards in the very near future.

In a letter that was presented with each award Prince George’s County Fire Chief Eugene A. Jones wrote, “It is with immense pride that I present you with an Emergency Services Award. You are being recognized for actions that saved the life of a fellow firefighter. Your actions are commendable and held within the highest tradition of the fire service.”

Just after 2:00 a.m. on Wednesday, April 8, 2009, a box alarm was transmitted for a house fire at 87 Herrington Drive in Kettering. Fire and emergency medical service units arrived to find a two-story single family home with fire involving a car port with extension to the interior of the structure. Firefighters from the first arriving engine company advanced hoselines through the front door and started to knock down the fire. Additional units arrived shortly after and initiated their assigned suppression duties. During this time, a firefighters’ Personal Accountability Safety System (PASS) sounded and was heard by a team of interior firefighters. Heavy fire conditions still consumed the first floor area as firefighters started to search for the source of the sounding PASS device. A downed firefighter was soon located in a room adjacent to the kitchen area and a MAYDAY was sounded. While one of the interior firefighters directed a hoseline to protect those assisting the downed firefighter from the rapidly extending fire, the firefighter that located the injured member was rapidly assessing his condition. The downed firefighter was found to be unconscious and suffering from burns to his face.

Additional firefighters from the interior and exterior executed a rapid removal of the critically injured firefighter out of a nearby window. Paramedics, assisted by another team of firefighters, started their rapid assessment and initial treatment. Advanced airway management was put in place and the injured firefighter was packaged for transport by paramedic unit to the Washington Hospital Burn Unit. Fire Fighter/Medic Dan McGown remained at the burn unit for just over a week and after three months of recovery and rehab has since returned to full duty.

Fire Chief Jones concluded by stating, “For your fast actions and quick thinking in rescuing a fellow firefighter in a life or death situation, you are hereby awarded an Emergency Services Award. Your actions speak highly of yourself and the entire Prince George’s County Fire/Emergency Medical Services (EMS) Department.”

Volunteer Firefighter Timothy McCloskey, Kentland VFD, for protecting firefighters during rescue operations by directing a hoseline in the kitchen area and keeping the fire in check.

Fire Fighter/Medic Jamieson Scarlata, Paramedic Unit 846, for administering advanced life support including airway management and quickly transporting to the Burn Unit.
Posted by PGFD at 12:23 PM No comments: Links to this post