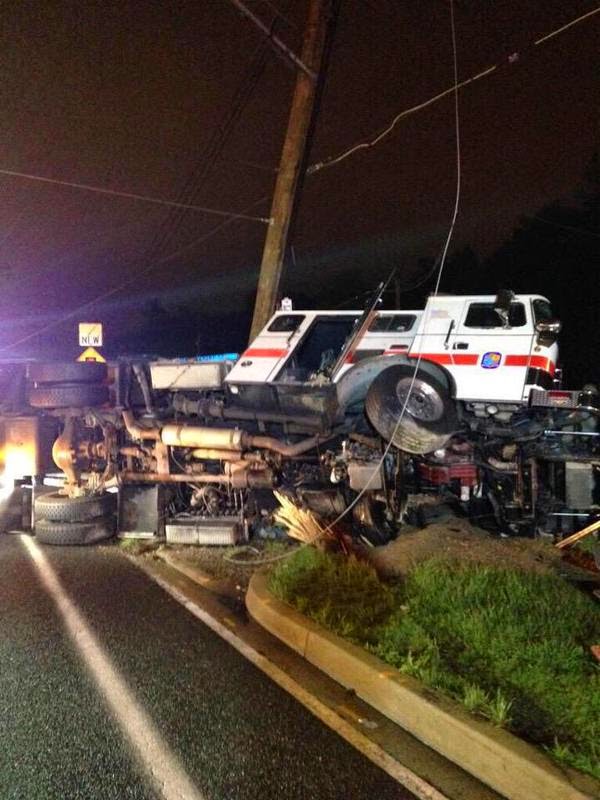 The first crash occurred when firefighters were alerted to a possible building fire.  One of the dispatched units was an engine from the Morningside Fire/EMS Station #827 just before midnight Saturday.    Road conditions were wet from a recent rain.  Just minutes past midnight, Sunday morning, Engine 827 was responding on Branch Avenue approaching the intersection at Curtis Drive in Temple Hills.  A preliminary investigation indicated that the engine took defensive maneuvers to avoid a civilian vehicle that pulled into their right-of-way.  Engine 827 ultimately overturned and impacted a utility pole.

There were seven volunteer members of the Morningside Volunteer Fire Department on-board the unit.  All seven firefighters were transported to area hospitals where they were eventually treated and released Sunday morning.

The Prince George’s County owned engine, a 1995 Seagrave, is considered a total loss.  Estimated loss of the engine and equipment is valued at $200,000.  Replacement cost of the engine is $650,000.

Another reserve engine was placed in service at Morningside later that day.

The investigation into the crash remains open and on-going by both Fire/EMS and Police Departments. 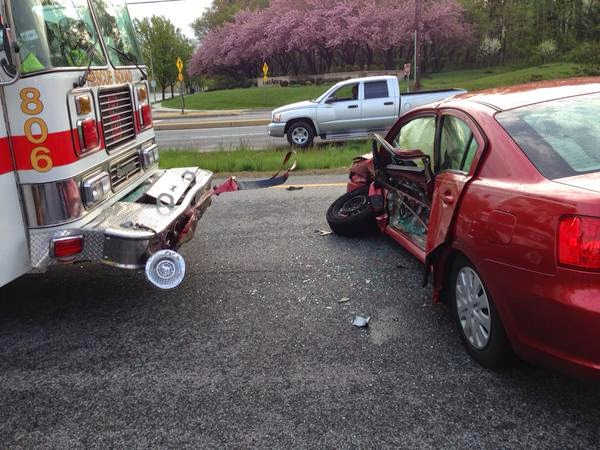 Two career firefighters and one civilian were transported to area hospitals.  All injuries are non-life threatening.

The rescue squad damage appears repairable, although will be out of service for a period of time.  Squad damage is estimated at about $8,000 and the civilian vehicle is considered a total loss.

The investigation into this crash is also open and on-going.

Standard procedure for the Fire/EMS Department requires that any driver involved in a crash resulting in excess of $2,000 in damages or when an injury occurs will undergo post-crash testing for drugs and/or alcohol.  This testing took place in both instances on Sunday.

No charges were filed at the scene.

In response to the two incidents, Prince George’s County Fire Chief Marc S. Bashoor sent an Email to members of the Department stating, in part, “As you are likely aware, the Fire/EMS Department experienced two significant and similar apparatus accidents in the past 24 hours.  Although a total of 9 firefighters were transported to area hospitals, I am pleased to report all of our personnel have been released from the hospitals.”  He continued to write, “It is incumbent upon each driver to ensure they use lessons learned from these and other incidents to establish a culture of safe driving.”

Posted by PGFD at 12:53 PM No comments: Links to this post