On the morning of Thursday, September 12, 2013, while returning to the station after responding on a call, Acting Fire Fighter/ Medic Captain Alain Antonin and Fire Fighter/Medic Technician Stephanie Bunce observed a car swerving across both sides of Riggs Road in Hyattsville.  When it crashed into a bus stop, the initial thought was the driver might be inebriated.  The pair quickly realized the safety of other motorists was compromised and began following the vehicle, sounding both siren and air horn.  The car eventually stopped in the middle of the road, at which time a young female passenger jumped out.  The school-aged girl was frantically screaming, “Help me!”  Fearing she may have been abducted and uncertain of what to expect, they approached the car with extreme caution.  Upon reaching the girl, it was learned the driver, her mother, was suffering a diabetic crisis.  After assessing the woman and noting that her glucose reading was only 23, an IV line was started.  Within minutes after receiving Dextrose 50%, the patient’s blood sugar level increased and she gradually returned to a lucid state.

In making the presentation today, October 10, at the Bunker Hill Fire/EMS Station, Prince George's County Fire/EMS Chief Marc S. Bashoor stated, "For your performance on the scene of the aforementioned incident that possibly saved the life of the patient, her daughter, and others, you are hereby awarded a Fire/EMS Department Emergency Service Award.  Thank you for a job well done.  Your actions reflect favorably on you as a professional, the Fire/EMS Department, and Prince George’s County Government as a whole." 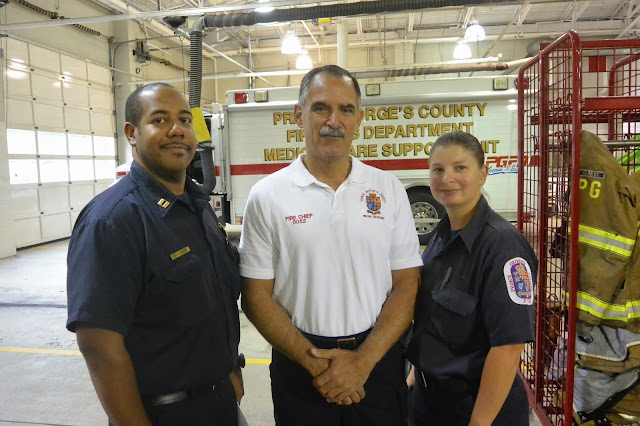 Posted by PGFD at 3:07 PM No comments: Links to this post