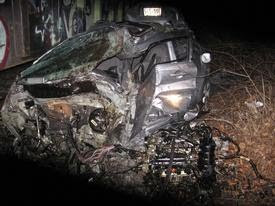 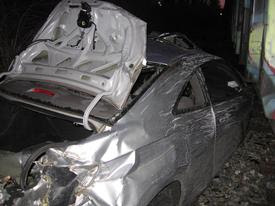 A train collided with a car that had made its way onto the tracks early this morning seriously injuring the vehicle occupant. At about 6:15 AM, Sunday, January 10, 2010, a 70-car CSX freight train struck a car near Baltimore Avenue and Ritz Way in Beltsville. The passenger vehicle was on a section of tracks that run parallel to Baltimore Avenue (Route 1) through Beltsville and into Laurel. The tracks vary in height with sections being elevated above street level and some sections of track that are below street level; the crash occurred in a section where the train tracks are below street level and down an embankment. The County Police are investigating the events that led up to the vehicle leaving the roadway and coming to rest on the train tracks; there are no crossings in that area.

Firefighters arrived and found an injured civilian and his car heavily damaged. The driver had escaped from his vehicle prior to the collision with the train. His injuries were sustained when his car left Baltimore Avenue and fell onto the train tracks. The vehicles engine compartment was separated from the vehicle during the collision with the train. Paramedics tended to the injured male while firefighters checked to ensure the train was not damaged and remained on the tracks. Hazardous Materials Teams confirmed that the train cars containing chemicals were intact and not damaged. A male, approximately 30 years of age, was treated and transported by paramedics with trauma to his upper body. He was transported to a local trauma center in serious condition. The Prince George’s County Police Department is investigating the crash.
Posted by PGFD at 9:36 AM No comments: Links to this post