Prince George’s County Firefighters extinguished a fire this afternoon inside of a Bowie home just blocks from the Northview Community Fire/EMS Station #816.

During the lunch hour two PGFD Station were alerted to assist Anne Arundel County Firefighters in extinguishing a garage fire in Crofton.  Bowie Fire/EMS Station 839 (Freestate) and the Northview Fire/EMS Station 816 were both still operating on that fire when at about 1:45 pm a house fire was dispatched in the 15000 block of Northcote Lane, just a few short blocks from Northview #816.

Earlier that afternoon, realizing that PGFD Firefighters would be tied up on the Crofton fire for an extended period of time, dispatch supervisors at Public Safety Communications transferred other firefighters into the vacant Bowie stations.  West Lanham Hills Fire/EMS Engine 848 was transferred to fill in at Northview #816.

So it was that firefighters on board Engine 848 was to arrive first on the Bowie house fire.  Firefighters arrived at the 1-story home with fire showing from a converted garage area turned family room.  Firefighters determined home occupants were safely outside the home and initiated an interior attack.

The majority of the fire was knocked down within 10 minutes of arrival.  One of the home occupants had recently started a fire in a wood burning stove located near the area of origin and may be responsible for the cause, however, the cause of the fire is still under investigation.  Preliminary fire loss is estimated at $100,000.  Two adult occupants will be displaced.

No civilian or firefighter injuries were reported.

All images courtesy of PGFD 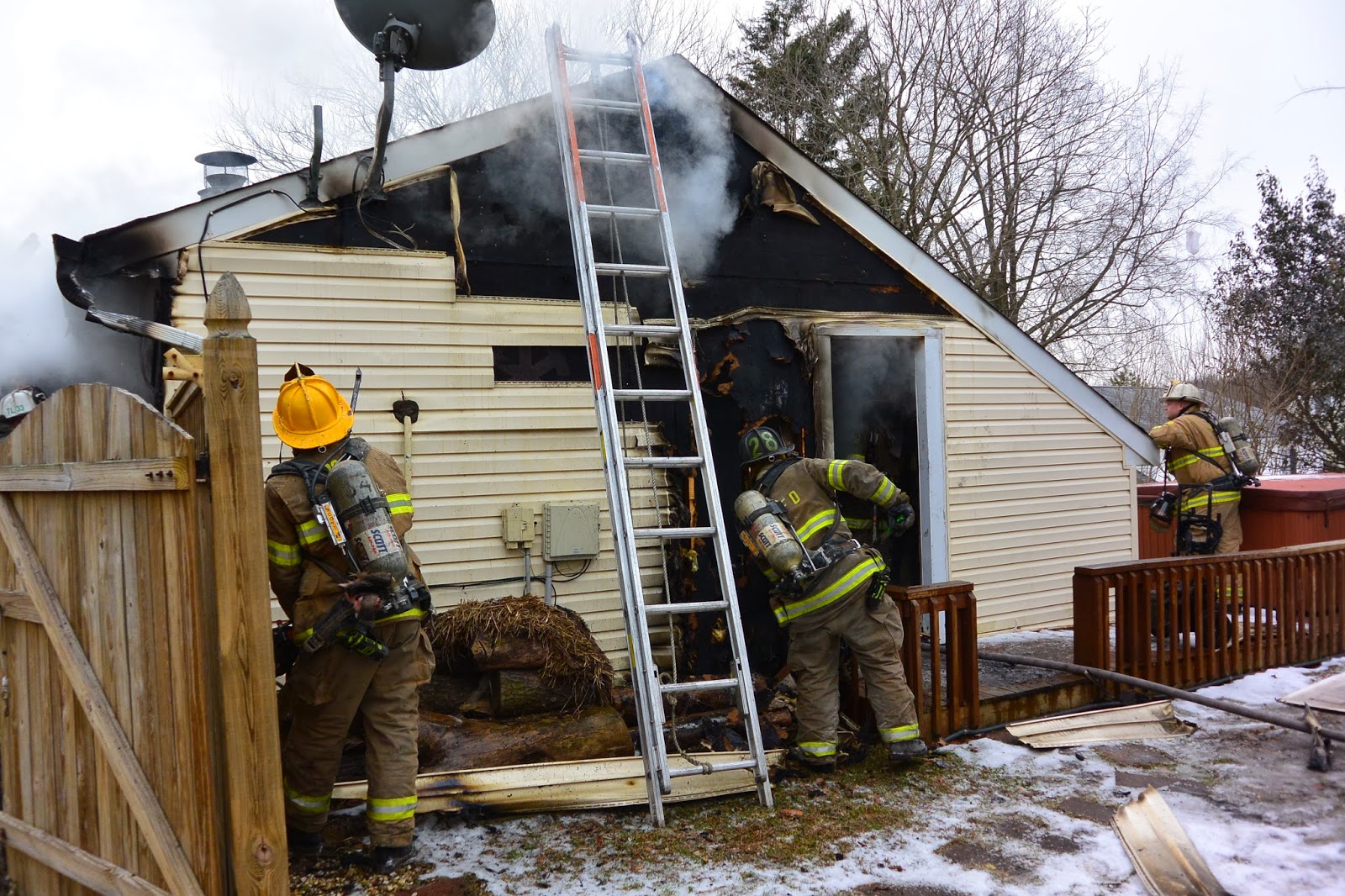 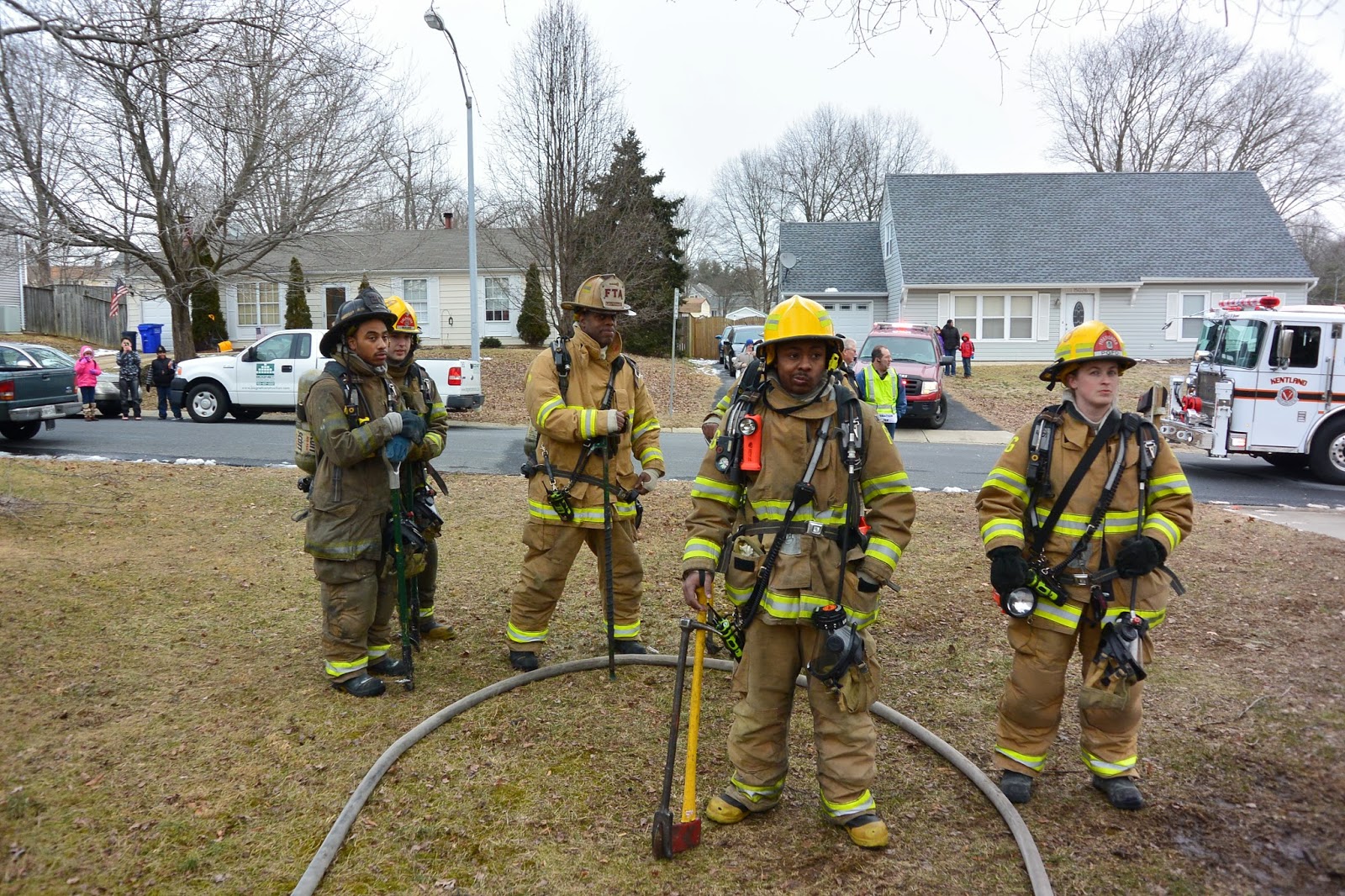 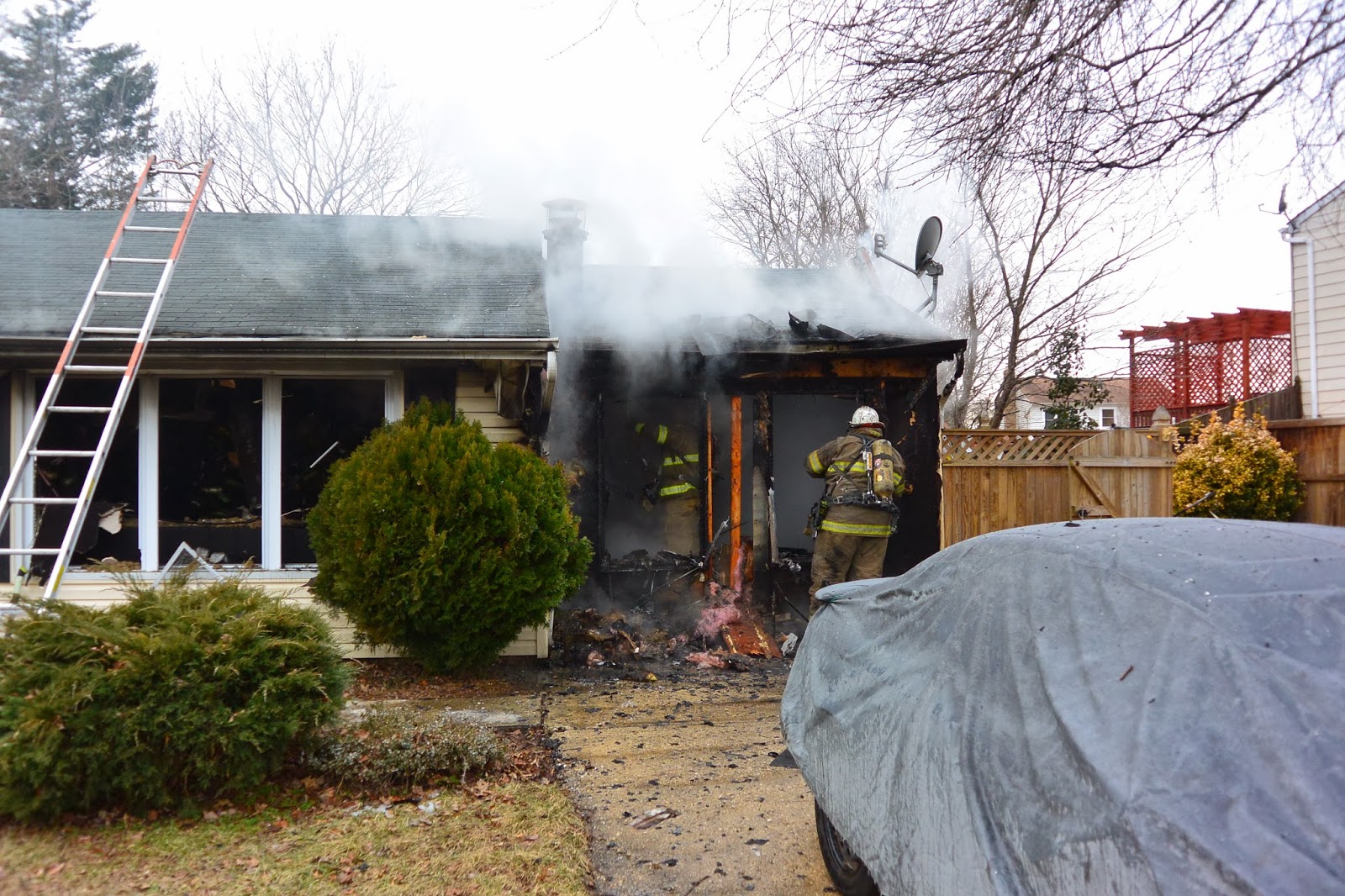 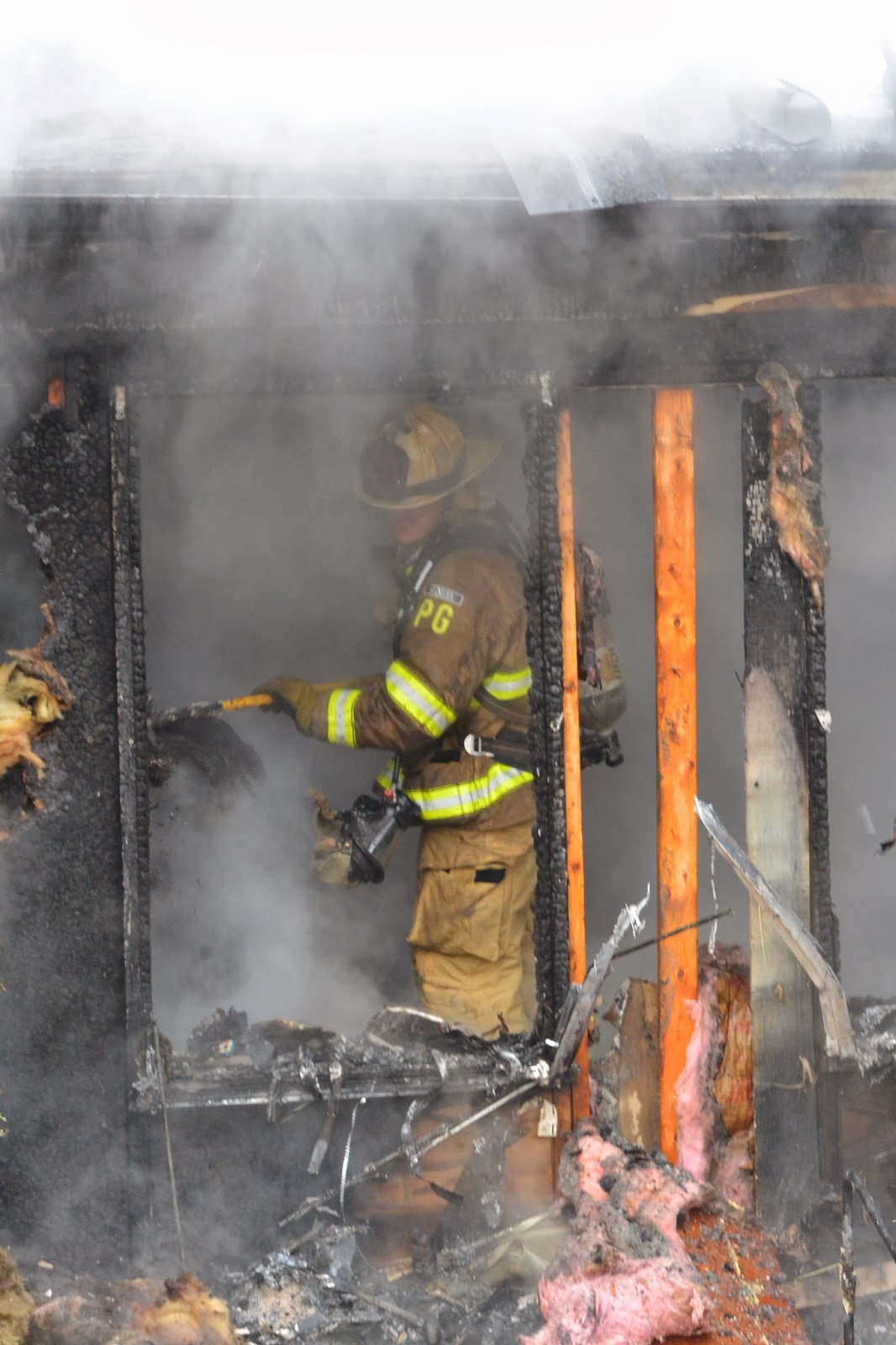 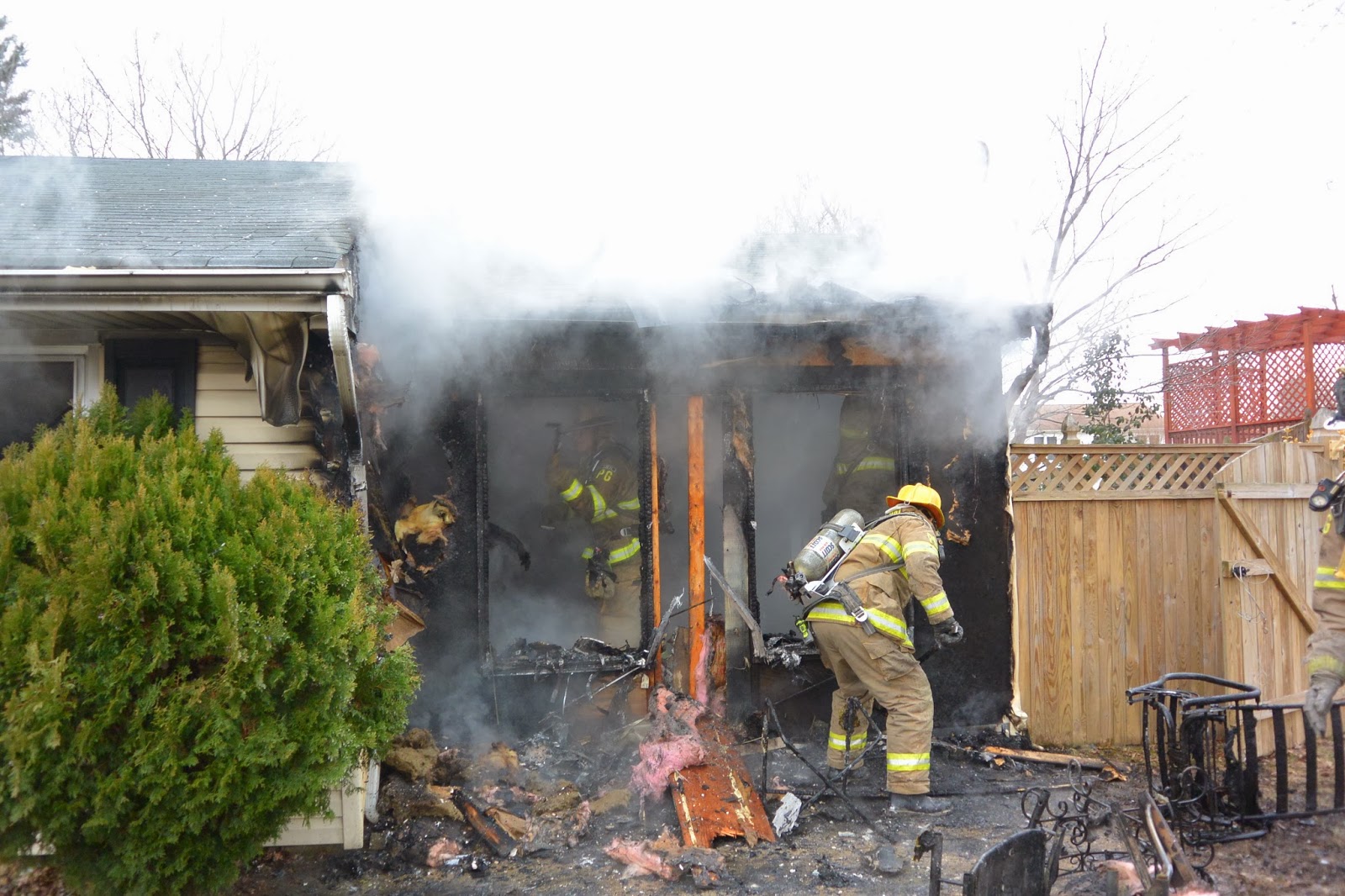 Posted by PGFD at 5:37 PM No comments: Links to this post

An Oxon Hill resident was exposed to an unhealthy level of carbon monoxide (CO) in her home and knew enough to call 911 when she became ill.  Just before 5:00 pm, Monday, January 27, 2014, an adult female and lone occupant of a single family home in the 5500 block of Woodland Drive felt sick and called 911.  For whatever reason she told the 911 call taker she was suffering from CO.

The caller was able to provide enough information for Fire/EMS units to respond to her location but when told by the call taker to evacuate the house and wait outside, the caller said she was too sick and weak to follow the call takers instructions and remained in the house.

Firefighters and paramedics arrived within minutes and removed the occupant to the homes exterior where paramedics started to treat and assess the patient’s condition.  Firefighters used meters to determine there were 125 to 250 parts per million of CO in different rooms of the house.  Any exposure to CO above 30 ppm is considered unhealthy.

Firefighters searched the house for the source and believe a malfunctioning natural gas furnace or ventilation system was responsible for the high CO levels and they turned the appliance off.  The house was than ventilated to remove the toxic gas from the house.

Meanwhile, paramedics determined there was enough CO in their patients system to warrant a trip to a hospital.  Paramedics summoned a medevac helicopter to transport the female to a hospital in the Baltimore area with a hyperbaric chamber; the preferred treatment for patients exposed to high level of CO.

Knowing the importance of CO alarms, before firefighters left the scene they installed a CO alarm in the house.  A CO alarm is the only means of determining the presence of CO in a home.  CO is colorless and odorless and the human senses cannot detect its presence.  When exposed to CO a person will start to feel ill with headaches, dizziness and nausea.  Conditions will continue to worsen up until death occurring the longer the person is exposed to CO.  Higher levels of CO will only serve to speed up the process of illness to death.

The Fire/EMS Department recommends a certified HVAC technician inspect your appliances each year to ensure they are operating and ventilating correctly.  Many HVAC companies offer a discounted rate for this valuable service.

The adult female resident was in good condition and is expected to survive her ordeal.
Posted by PGFD at 4:52 PM No comments: Links to this post


...WINTER WEATHER ADVISORY IN EFFECT FROM 6 PM THIS EVENING TO
6 AM EST WEDNESDAY…

THE NATIONAL WEATHER SERVICE IN BALTIMORE MD/WASHINGTON HAS
ISSUED A WINTER WEATHER ADVISORY FOR SNOW... WHICH IS IN EFFECT
FROM 6 PM THIS EVENING TO 6 AM EST WEDNESDAY.

* TIMING...TONIGHT. THE STEADIEST SNOW WILL BE LATE THIS EVENING
AND OVERNIGHT.

A WINTER WEATHER ADVISORY MEANS THAT PERIODS OF SNOW WILL CAUSE
TRAVEL DIFFICULTIES. BE PREPARED FOR SLIPPERY ROADS AND LIMITED
VISIBILITIES...AND USE CAUTION WHILE DRIVING.

Stay Ready - Visit Ready.gov and follow instructions for having the appropriate items ready.


The civilian, career and volunteer men and women of the Fire/EMS Department want to remind everyone that fire safety and prevention are especially important during times of cold temperatures.  “Temperatures drop and fires increase,” said Prince George's County Fire Chief Marc S. Bashoor.  According to NFPA statistics space heaters account for about one third of the home heating fires yet more than 80 percent of the home heating fire deaths.     The Winter Residential Building Fires report released by USFA in 2010, reports an estimated 108,400 winter residential building fires occur annually in the United States, resulting in an estimated average of 945 deaths, 3,825 injuries, and $1.7 billion in property loss.    Cooking and heating are the top causes of fires during cold weather.
“The winter season brings the highest number of home fires than any other time of year,” said Fire Chief Bashoor. “Each winter season, home fires increase in part due to cooking and heating fires. Fire safety and injury prevention must not be lost in an effort to stay warm. Stay warm and do so safely.  Safety First ensures everyone goes home.”

Electric Space Heaters
• Buy only heaters evaluated by a nationally recognized laboratory, such as Underwriters Laboratories (UL).    • Check to make sure it has a thermostat control mechanism, and will switch off automatically if the heater falls over.    • Heaters are not dryers or tables; don't dry clothes or store objects on top of your heater.     • Space heaters need space; keep combustibles at least three feet away from each heater.   • Always unplug your electric space heater when not in use.     Turn off at night or whenever you sleep. - - Never use an extension cord with space heaters - plug directly into wall socket.

Using a kerosene heater???  Never refuel indoors.  Remove the kerosene heater outdoors, turn off and wait for it to cool down before refueling and only use the correct type of fuel.

General Heating Tips
•    Furnaces, fireplaces and chimneys should be cleaned and checked each year by an appropriate professional prior to using.  Clear away any clutter from these heating devices, at least 3 feet away.

•    Only use seasoned wood in fireplaces, never use ignitable liquids to start a fire and do not overload your appliance.
•    The 3-foot rule also applies to furnaces and fireplaces.  No combustibles items within 3 feet of these heating appliances.
•    Dispose of fireplace ash into a metal container and store outdoors away from structures on a concrete surface.  Fireplace ash can ignite a fire days after they have been discarded.
Finally, ensure your smoke and carbon monoxide (CO) alarms are working by pushing the test button on the front cover.  If you do not hear an audible warning, replace your alarm with a new 10-year, tamper proof, with hush feature alarm.  Having a working smoke alarm dramatically increases your chances of surviving a fire. A working CO detector will protect you and your family from deadly "silent killer" fumes that may be building up in your home.  Remember to practice a home escape plan frequently with your family.   Residents of Prince George’s County can contact our "Safety First" smoke alarm program at 301-864-SAFE (7233).  A firefighter will install a working smoke alarm in your home free of charge.   For additional information from the USFA on Winter Fire Safety; click here.usfire.gov.
Residents are encouraged to utilize Prince George’s County’s CountyClick 311 system to obtain information about public services.


Posted by PGFD at 3:29 PM No comments: Links to this post