Investigators from the Prince George's County Office of the Fire Marshal believe this morning's fire at the Andrews Ridge Apartment Homes is suspicious. Investigators are continuing their investigation and looking into what role, if any, a domestic dispute that reportedly occurred last night in the apartment of origin had in this fire.

Fire Investigators are asking that anyone with information about this incident at 5621 Regency Park Court in Suitland to contact the Fire/EMS Department Arson Hotline at 301-77-ARSON (27766).  Information can also be Emailed to 77ARSON@co.pg.md.us.  Information can be provided anonymously by phone.

The investigation remains open and on going.
Posted by PGFD at 3:37 PM No comments: Links to this post 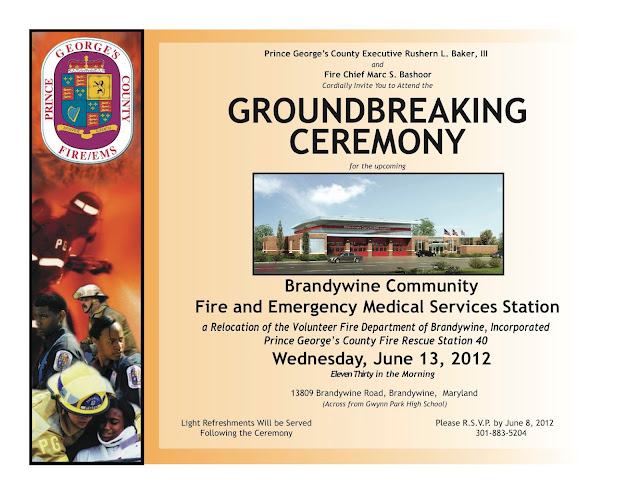 A Groundbreaking Ceremony will be held for the new Brandywine Community Fire/EMS Station.  You are invited to join elected and civic leaders, career, civilian and volunteer members of the Fire/EMS Department and members of the community at a ceremonial groundbreaking.

Posted by PGFD at 12:43 PM No comments: Links to this post

On February 24, seven firefighters were injured while battling a Riverdale House fire.  The firefighters were transported to the Burn Unit at the Washington Hospital Center where most were treated and released within hours of their arrival.  Others spent a few days and one, Kevin O’Toole, spent nearly 2 months in the Burn Unit and is still recovering from his injuries at home.

The cause of the fire was determined to be Arson.  The investigation into the person(s) responsible for this crime remains open and on going.

U.S. Representative Donna F. Edwards, D-4th Congressional District, has followed the progress of the injured firefighters since the evening of the fire and waited for everyone to be released from the hospital before asking to meet with them.  Representative Edwards is looking forward to meeting the seven firefighters, their families, co-workers and command staff of the Fire/EMS Department.

WHAT:           Recognition of Injured Firefighters by Representative Donna Edwards

WHO:             Seven firefighters their families and co-workers.  Command Staff of the Fire/EMS Department
Posted by PGFD at 12:20 PM No comments: Links to this post 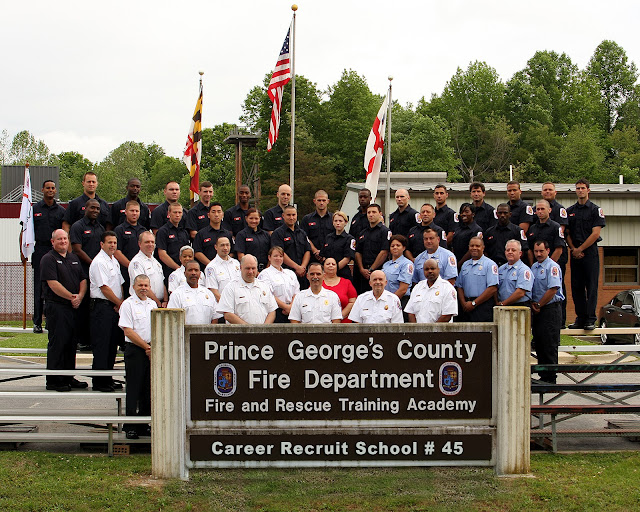 The Prince George’s County Fire/Emergency Medical Services (EMS) Department will conduct a graduation ceremony for 27 firefighter recruits.  These recruits have successfully completed the requirements to be certified as firefighters and will report to their Fire/EMS Station assignments the day after graduation.  This particular class of recruits already were certified as Emergency Medical Technicians or higher when they were hired thereby saving weeks of training.

Posted by PGFD at 11:56 AM No comments: Links to this post

Just before 2:00 am, Wednesday, June 6, firefighters from the Bladensburg area were alerted to a house fire in the 4800 block of 48th Avenue.  Fire/EMS units arrived to find fire showing from the attic of the 1 ½ story single family home.  The fire was quickly contained and extinguished.  The fire was caused by a faulty ventilation pipe from the cooking area.  Fire loss is estimated at $70,000.

The eight occupants are displaced, 3 adults and 5 children, and are being assisted by the County Citizen Services Unit and the American Rd Cross.  No civilian or firefighter injuries were reported. 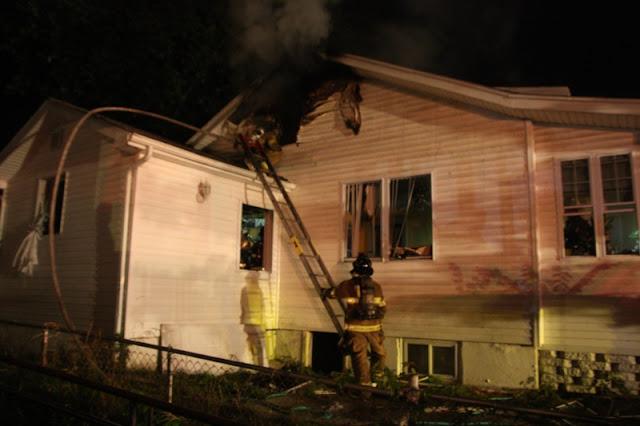 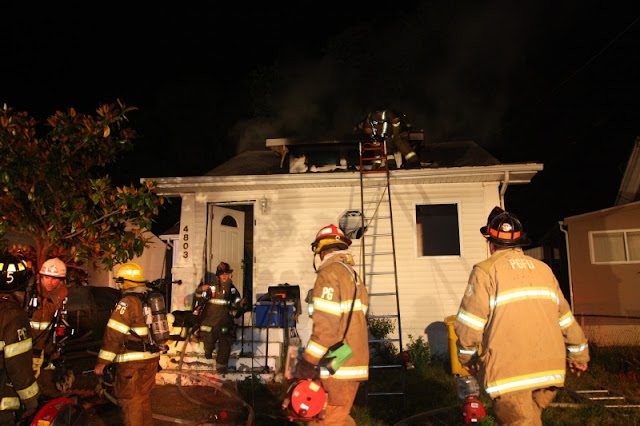 Posted by PGFD at 10:38 AM No comments: Links to this post

At around 6:30 am, Wednesday, June 6, firefighters were alerted to a fire in an apartment building in the Andrews Ridge Apartment Complex in Suitland.

Firefighters arrived at 5621 Regency Park Court and found heavy fire showing from the rear side of the building. This is a 3-story (front) 4-story (rear) garden style apartment building. The fire appears to have started in a terrace level apartment and extended through the upper floors and into the flat roof assembly.

The first arriving ladder truck, Silver Hill Fire/EMS Station 829, rescued 4 family members from a top floor balcony.  The family attempted to escape by way of the building center stairwell, however, encountered intense heat and thick smoke.  They retreated to their balcony and awaited the arrival of firefighters that removed them using a ground ladder.

The intensity of the fire grew as it leapfrogged balcony to balcony before reaching the roof.  3-alarms were sounded bringing 90 firefighters on-board over 25 pieces of fire/EMS apparatus to the scene.  It required 45 minutes to bring the fire under control.

One firefighter sustained a minor injury and did not need seek any medical attention.  No civilian injuires were reported.

Fourteen apartment units are declared uninhabitable.  31 residents will be displaced that include 19 adults and 11 children.  The County Citizen Services Unit and the American Red Cross will be assisting those residents that require temporary housing.

The cause of the fire remains under investigation.  A preliminary estimate of fire loss damage is $250,000.


Posted by PGFD at 7:40 AM No comments: Links to this post