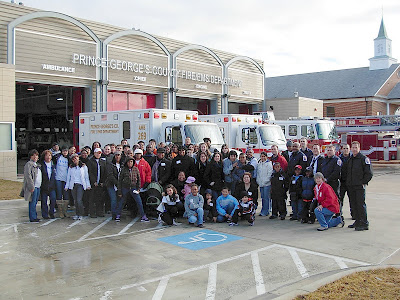 Fire safety information was distributed today to homes in the District Heights and Suitland area. The Prince George’s County Fire/EMS Department partnered with the American Red Cross and HOPE Worldwide/Mid-Atlantic Chapter volunteers that met at the District Heights Community Fire/EMS Station at 9:00 AM, Monday, January 18, 2010. After meeting with the Fire Fighter/Medics and taking a tour of the station and apparatus the group broke up into nine different teams that dispersed throughout the community passing out fire safety information on door hangars. There were about 50 members between the two groups that handed out 2200 pieces of fire safety information.

Prince George’s County Fire Chief Eugene A. Jones stated, “I want to thank the members of the Red Cross and Hope Worldwide for their assistance in spreading the word of fire safety. We recently suffered a civilian loss of life from a home fire in the very community that was visited today by these groups and I know the community appreciated the information they received.”

Fire Department Major Steve Hess helped to coordinate today’s effort and was impressed by their energy. He stated, “It was a pleasure working with such an energetic group that knew their mission and approached it with enthusiasm.”

Working smoke alarms increase your chances of surviving a fire by 50%. To have a smoke alarm installed in your home, free-of-charge, contact our Smoke Alarm Hotline at 301-864-SAFE.
Posted by PGFD at 7:06 PM No comments: Links to this post