Two recent fires have been deemed “incendiary” and will be added to the list of fires currently under investigation in the Laurel area.  Prince George’s County Fire/Emergency Medical Services (EMS) Department Office of the Fire Marshal personnel conducted a cause and origin investigation at the scene of the fires that involved playground equipment and another at a long vacant restaurant. Investigators believe the two fires have similarities to seven others that have been under investigation since March.

There has been an on-going joint investigation into these incidents by the Prince George’s County Fire/EMS Department, City of Laurel Police Department, Bureau of Alcohol, Tobacco, Firearms and Explosives (ATF) and our County Police.  The investigation has now been expanded to nine incidents, to include these that have recently occurred;

and less then 12 hours later,

Shortly after midnight, May 31, a fire was set in an exterior closet of the former Bay N’ Surf Restaurant in the 14400 block of Baltimore Avenue. The restaurant had previously sustained significant damage from a fire in February of 2007 and has been closed and vacant ever since.

The City of Laurel has posted a reward of up to $10,000 for anyone that provides information that leads to the arrest and conviction of whoever  may be responsible for these crimes of Arson.  Citizens are encouraged to call our Arson Tip Line at 301-77-ARSON (301-772-7766).

Audio file of this press release.

The expanded investigation was announced at a press conference in early April. 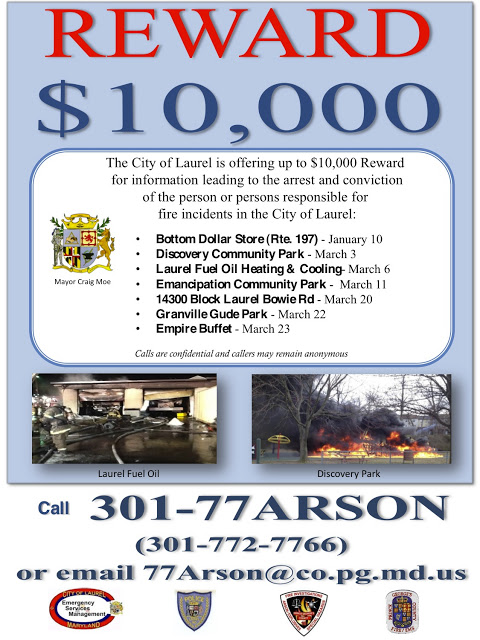