The Prince George’s County Fire/Emergency Medical Services (EMS) Department’s Office of the Fire Marshal and the City of Laurel Police Department are jointly investigating a number of fire incidents that have occurred in and around the City of Laurel that have caused over $600,000 in estimated fire loss.  Some of these fires are Incendiary (set) while others remain under investigation.  All of the incidents with one exception occurred in the month of March.

There are at least 7 incidents under investigation.  The cause of two of the incidents; Emancipation and Discovery Community Parks, have similarities while the remaining 5 incidents remain a matter of “incidents of interest” to investigators.

On March 8th the City of Laurel Police Department arrested and charged two juveniles with setting a fire to the playground at the Granville Gude Park.  Fire Investigators do not believe that this incident is related

The City of Laurel is offering up to a $10,000 reward for information that leads to the arrest and conviction of the person(s) responsible for these fires.  Anyone with any information is encouraged to call the Arson Tip Line at 301-77-ARSON (301-772-7766).  Callers may remain anonymous.

City of Laurel Mayor Craig A. Moe said, "Laurel is a great place to live, work and enjoy, but I am greatly concerned about the recent activities involving some malicious fires and associated disruptive behavior.  Fortunately there has been no personal injury, as of yet, but I am troubled by not only the physical damage but the overall perception of public safety.  The playgrounds and other structures can be, and will be rebuilt; the emotional and psychological damages can be longer-lasting.  I appeal to anyone who knows something about these incidents to come forward.  Working together we can preserve the well-being and future of our children.”

Prince George’s County Fire Chief Marc S. Bashoor stated, “Arson is a heinous crime that we take very seriously in Prince George’s County.  We have an extremely talented and experienced team of fire investigators that will work day and night until whoever is responsible is arrested.  I encourage anyone with information, pictures and videos of any of these incidents to contact investigators.”

While the investigation is on-going everyone should remain vigilant. Fire and Police Investigators urge anyone that witnesses suspicious activity or believe a crime is about to occur to call 911 immediately.  Citizens should pay particular attention to details of possible suspects and if there are any vehicles involved.  Gather as much descriptive information as possible, including vehicle tags numbers, and write down that information as soon as possible.  No one should ever place themselves in harm’s way to obtain this information – please try to document this information from a safe location and call 911. 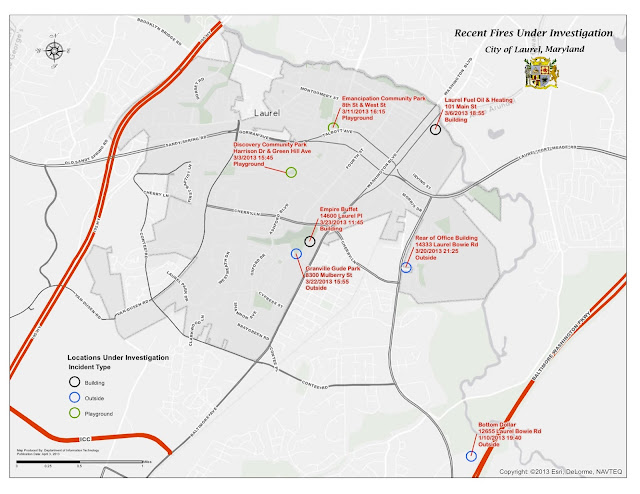 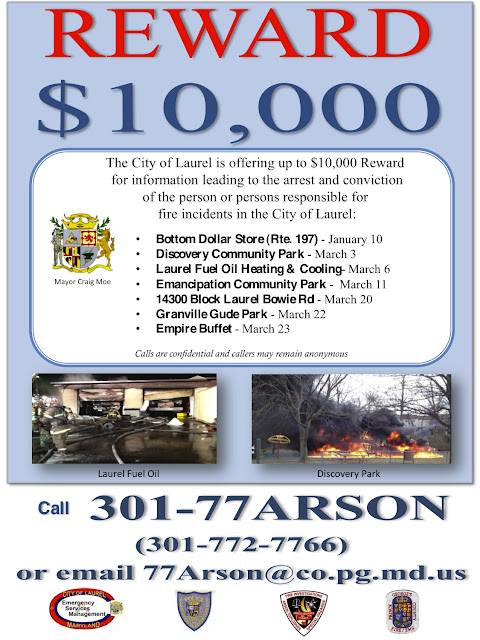 Posted by PGFD at 11:30 AM No comments: Links to this post